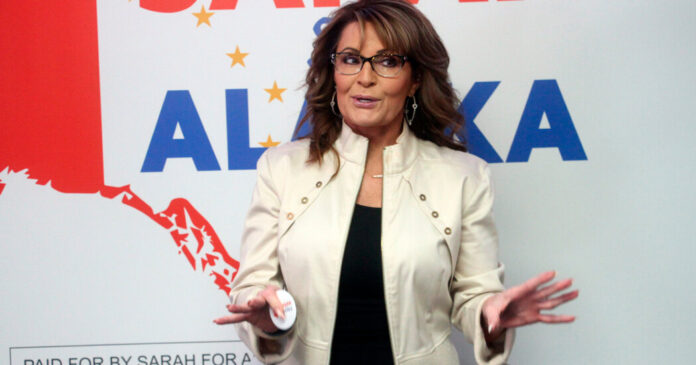 Former Gov. Sarah Palin of Alaska leads the 48-candidate field in a special primary election for the state’s sole congressional seat, according to a preliminary count of ballots on Sunday.

The top four candidates in the race will advance to the special election in August. Ms. Palin has nearly 30 percent of the vote tallied so far; Nick Begich, the scion of an Alaskan political dynasty, has 19.3 percent; Al Gross, a surgeon and commercial fisherman who ran for Senate two years ago, has nearly 12.5 percent; and Mary S. Peltola, a former state legislator, has about 7.5 percent.

Ms. Palin and Mr. Begich are Republicans, Mr. Gross is not affiliated with a party, and Ms. Peltola is a Democrat.

The special election was prompted by the death in March of Representative Don Young, a Republican who was first elected to the House in 1973. The election is to fill the remainder of Mr. Young’s current term.

The special election will be held on Aug. 16, which is also the day of Alaska’s primary contest for the House seat’s 2023-2025 term. So, voters will see some candidates’ names twice on one ballot: once to decide the outcome of the special election and once to pick candidates for the fall’s general election for the full two-year term.

For Ms. Palin, the race is a political comeback. As Senator John McCain’s running mate in the 2008 presidential race, Ms. Palin lost to a Democratic ticket that included Joseph R. Biden Jr., and she resigned from the governor’s office, seeking to parlay her newfound profile into work as a well-paid political pundit. Ms. Palin had tapped into a similar anti-establishment, anti-news media vein of the Republican Party that later galvanized Donald J. Trump’s unexpected rise to the White House in 2016.

The results announced on Sunday are preliminary and could change over the next few weeks, as more ballots are processed and counted.

Alaska is a thinly populated state, with two U.S. senators but only one representative in the House. That small population is spread across an area that is larger than Texas, California and Montana combined, with about 82 percent of communities in the state inaccessible by roads.

Counting ballots there can be challenging.

Each voter in the state was mailed a ballot, starting on April 27, and the ballots were due back on Saturday. At least three more rounds of preliminary results will be announced by state officials before the results are certified in about two weeks.