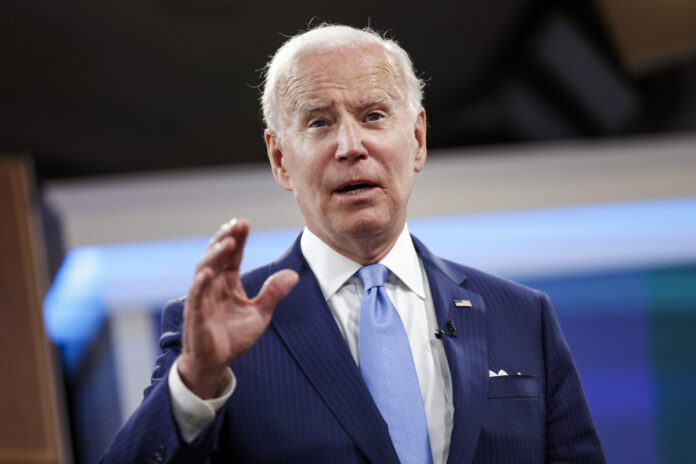 President Joe Biden said he would sign a framework bill on gun control and urged Congress to pass the measure on Sunday.

The measure, which is backed by 10 Republicans in the Senate, would eliminate the straw purchasing of firearms, fund mental health resources for families and children, enhance protections of domestic violence victims, and increase funding for school safety, and initiatives around mental health.

Notably, the framework bill includes a so-called red flag provision, and it allows for “resources to states and tribes to create and administer laws that help ensure deadly weapons are kept out of the hands of individuals whom a court has determined to be a significant danger to themselves or others,” according to a news release on Sunday.

“I want to thank Senator Chris Murphy and the members of his bipartisan group—especially Senators [John] Cornyn, [Kyrsten] Sinema, and [Thom] Tillis—for their tireless work to produce this proposal,” Biden said in a statement after Sunday’s announcement.

Biden, however, said the bill “does not do everything that I think is needed” on gun control,” but it reflects important steps in the right direction, and would be the most significant gun safety legislation to pass Congress in decades.”

In recent days, Biden publicly said he would back bills that ban magazines that carry 10 rounds or more—which are very common and are owned by millions of Americans—and so-called “assault weapons,” a term that some Republicans have said is not clearly defined and is intentionally vague. Some Democrats have called for bans on all semi-automatic rifles, which they’ve termed “assault weapons” and not just guns like the AR-15.

A well-cited study (pdf) released by the Justice Department discovered that “assault weapons” were “rarely used” in gun crimes, but it concluded that the 1994 ban on them may have had a larger impact if it remained in place after 2004.

The flurry of legislative action comes after several high-profile mass shootings in New York and Buffalo. A large number of Republicans have criticized some of the GOP senators for negotiating with Democrats on a gun control bill and said they are capitulating to a pressure campaign that is being waged following those shootings.

“A federal red-flag law would create millions of second-class citizens,” wrote Rep. Thomas Massie (R-Ky.) on Twitter. “It won’t stop mass shooters but will deprive millions of Americans of due process and their Second Amendment rights.”

“We’re not going to put a piece of legislation on the table that will ban assault weapons or pass comprehensive background checks,” Murphy told CNN last month. “Right now, people in this country want us to make progress, they just don’t want the status quo to continue for another 30 years,” he said, without elaborating.