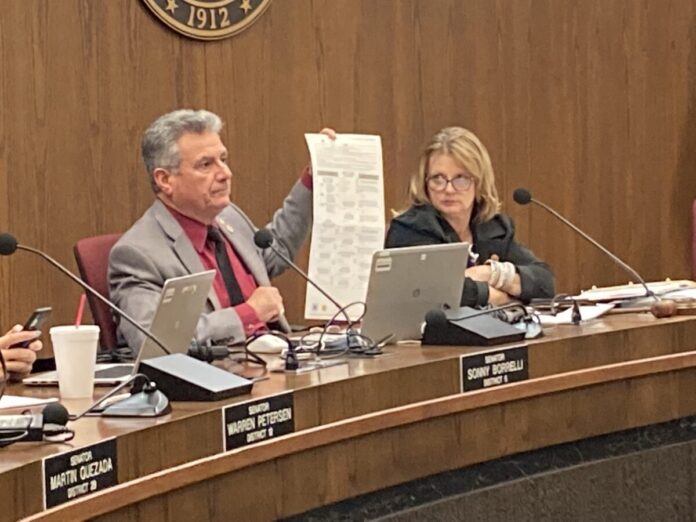 In an exclusive interview given to The Epoch Times, the recorder at the Yuma County Sherrif’s Office offered more insights into the risks of fraudulent registration forms leading up to the 2022 Primary Election and the efforts she and her team are working on to improve the process.

“So our primary is Aug. 2. We have received registration forms that are fraudulently completed,” Yuma County recorder Robyn Stallworth Pouquette, who provides oversight into the county’s voter registration and early voting, told The Epoch Times in an interview on June 7. “It’s been a prevalent problem in Yuma County, and it’s very unfortunate.”

Pouquette’s allegations come in addition to other witness reports and allegations of voting fraud that are the subject of 16 open investigations at the sheriff’s office.

The observed “pattern of fraudulent voter registration forms,” according to a May 11 statement made by the sheriff’s office, includes alleged impersonation fraud, false registrations, duplicate voting, and fraudulent use of absentee ballots.

While Pouquette could not provide any names because the investigation is ongoing, she confirmed to The Epoch Times that many of the cases pertain to non-profits operating on a national scale, which she believes to be “political advocacy groups.”

“We are extremely encouraged that the Yuma County Sheriff’s Office and Recorder’s Office are now working together to investigate individuals involved in the subversion of elections,” Catherine Engelbrecht, founder of election integrity group True The Vote, told The Epoch Times in a statement in May. “We’ve spent concentrated time in Yuma County and have provided significant information to both state and federal authorities. What has been happening in Yuma County is happening across the country. The targeting of vulnerable communities and voter abuse must be stopped.”

“It is very difficult to identify who is submitting these fraudulent forms. But I am aware of activities of third-party groups and I shared that information with the sheriff’s office,” Pouquette said of what she’s witnessed.

Pouquette said that while third-party organizations who solicit voter registrations serve an important role in assisting voters, they are also a point of vulnerability in the election process if the ballots they help voters’ submit are fraudulent—due to intentional or unintentional misrepresentation of a voter’s wishes.

“I believe it’s a vulnerability of the system, in the sense that fraudulent voter registrations can disrupt the legitimate active registration of an eligible voter,” she said. “It is a very disruptive process for the office when we should be focusing on audits and making sure that we’re auditing our records prior to the distribution of ballots.”

“I am very passionate about it because there is no regulation that precludes voter registration activities [by] third-party groups,” Pouquette said. “I feel that voter registration solicitors should be held accountable to a higher standard.”

After these third-party organizations drop the voter registration forms they’ve collected at the recorder’s office, Pouquette and her team would run them through a statewide database to cross-check the identifying information on each form to the voter.

However, Pouquette said she’s noticed unusual signs with some of the forms she’s received.

“I could immediately see that there were individual names in those forms that were people that I knew were already registered. But they were utilizing real people’s names with fake addresses and fake dates of birth,” she said. “One of them was our pediatrician. One of them was a local attorney who I had been an acquaintance of and has passed away for some time. One was a minor that I believe was around the age of 14 … So it just became very clear that there was a problem.

“And then, we’re getting five, six registration forms for the same person. As you can imagine, that’s where we feel that there’s an intentional effort to disrupt the system and identify vulnerabilities,” Pouquette added.

Pouquette said they’ve noticed over 100 such anomalies in the registration process leading up to the 2022 primaries and have sent letters to each of the addresses indicated on the registration forms as required by law.

“I simply find it unfortunate that it is a requirement because we know that we’re sending them to people that we have a strong belief to be nonexistent,” she said. “We should be working on credible, real registrations that we have in our county, as opposed to spending any time or resources—which is actually significant time and resources—on this type of activity.”

Pouquette added that after she noticed a pattern of fraudulent registration in 2016, she and her team began to work with the Arizona legislature to develop new laws to “define parameters for regulation of voter registration solicitation.” However, she said the efforts have been largely unsuccessful.

She and her team, through the Flinn-Brown Fellowship, put together provisions that Arizona Senate Republicans included in a bill introduced in February 2022, SB1629, which would hold third-party registration solicitors accountable.

“[The bill] required that third-party registration solicitors turn in the forms within five days so that there’s a timeframe on accountability and any fraudulent form be subjected to a class-6 felony,” Pouquette said. “And as you can imagine, it was very controversial.”

The bill would also require anyone collecting more than 25 voter registration forms to identify themselves with the Secretary of State’s office so that the recorder’s office would have the ability to contact them for any issues with the forms they had turned in. The bill failed the third reading in March and is currently in a Senate motion to reconsider the third reading.

“We don’t want to diminish the work that third-party groups go do to vote or to do read registration and solicit voter registration. I believe that that’s important. And we should have groups that are able to do that, I just simply feel that we should place accountability measures that … professionalize the process to provide that trust to the community,” Pouquette added.

“I simply felt that it was a step in the right direction for accountability,” Pouquette said.

“And I do believe that, again, the work that’s put in to make every single effort to not allow these [fradulent] registrations to turn into ballots is, is complicated, and time-consuming, very, very straining on resources. She added. “And these are the staff and Election Officials that should diligently be working on administering a secure election and not dealing with criminal activity like that.”

Pouquette hoped to clarify that not all third-party groups that register voters are disruptive to the election process.

“So even a few bad actors, as you can imagine, contribute such a negative light on the process overall, which affects my office and the public trust in the electoral process … the other third-party groups that are making significant efforts to engage with voters and assist in, you know, the democratic process.”

“I always tell people they should be very proud to vote in Arizona, regardless of the negativity swirling around elections, because we work really hard. So I invite people in to see the process here from their ground floor to really understand what we do to verify and over verify and verify third time and audit. Those are just regular practices happening on a daily basis during the cycle here,” Pouquette said.

“I just really feel that that gets overlooked; you know, how bold election officials are, how brave they are, and doing this kind of work every single day, despite the critical response.”