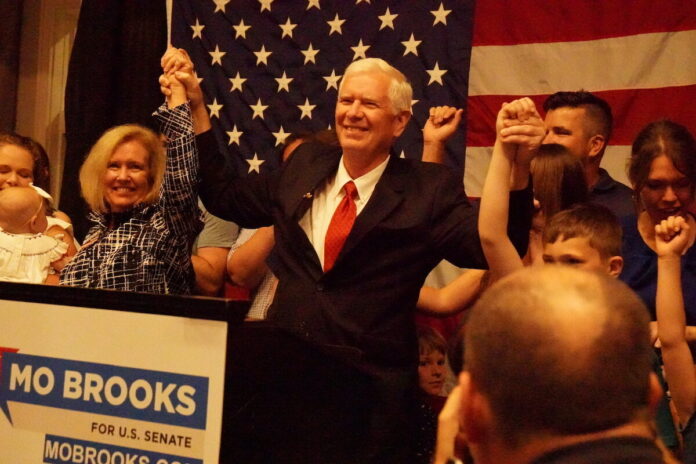 Even after missing another important endorsement, Rep. Mo Brooks (R-Ala.) has a chance in the race for Alabama’s Senate Republican primary against Katie Britt.

In the months before the Alabama primary, Brooks, Mike Durant, and Britt were in a three-way race for the open GOP primary seat. Although Britt consistently led, Durant and Brooks had fairly strong support.

Then, Brooks suffered a punishing blow to his campaign when former president Donald Trump withdrew his endorsement.

Brooks caused the withdrawal with a speech in which he asked voters to focus on the next election instead of continuing to debate about the 2020 election.

“Mo Brooks of Alabama made a horrible mistake recently when he went ‘woke’ and stated, referring to the 2020 Presidential Election Scam, ‘Put that behind you, put that behind you,’ despite the fact that the Election was rife with fraud and irregularities,” Trump said at the time.

In the aftermath of the withdrawal of Trump’s endorsement, Brooks’ poll numbers suffered. But the longtime Congressman was able to recover, eventually passing Durant and entering a run-off with Britt. But Brooks suffered another blow after Durant, who had signaled he would back Brooks, opted to endorse neither candidate.

Polls now suggest that Britt has the upper hand. Although she didn’t reach the 50 percent of the vote required to avoid a run-off, she did get 45 percent to Brooks’ 29 percent.

Britt’s performance so far is all the more impressive because this campaign is her first. So far, she has raised $7.4 million, according to Federal Election Commission figures.

Brooks has raised $3.1 million so far.

On the night of the primary election, one of Brooks’ first actions on receiving the results was to praise Durant, criticize Britt for running attack ads, and talk with Durant on the phone.

That night, it seemed like Brooks had a good chance of getting an endorsement from Durant.

Durant told local television that he would “absolutely” support Brooks against Britt.

But Durant has now announced that he won’t endorse either of the two candidates.

He said that Brooks has “been in the public office for 40 years,” and that Britt was both unethical and “really not qualified.”

“That’s what people have to decide. Unfortunately, it’s not a great option,” Durant said to the Associated Press.

Once again, Brooks lost what seemed like a guaranteed endorsement.

After this setback, Brooks has asked Trump for his endorsement again. Even after losing Trump’s endorsement, Brooks continued to use campaign slogans like “Make America Great Again.”