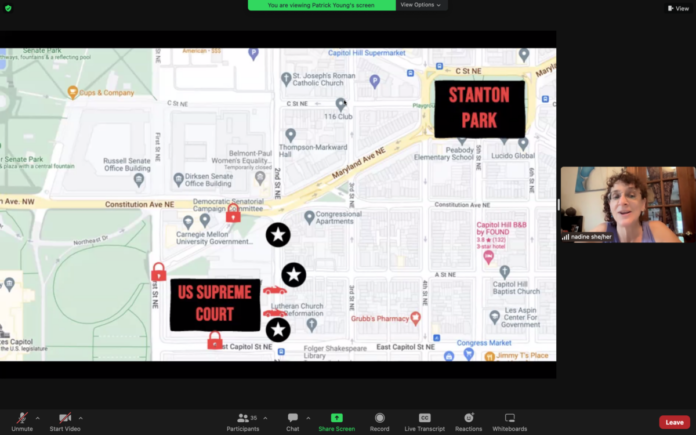 On June 10, about 34 activists attended a Zoom meeting meant to finalize plans. An earlier activist planning meeting had more than 60 people present.

The protest was a response to a leaked draft opinion that suggested the high court’s six conservative justices planned to overturn Roe v. Wade.

In Roe v. Wade, the Supreme Court ruled that abortion was a constitutional right and that legislators could only regulate it to a limited extent. But the Supreme Court’s leaked Dobbs v. Jackson draft decision would put decisions on abortion into the hands of state and national legislators.

Some of the activists had the belief that the court itself was illegitimate.

“We’re here because the Supreme Court, it is painfully clear, can no longer be allowed to make decisions for the majority of Americans,” said Hope Neyer.

“We think the Supreme Court is an illegitimate, undemocratic institution,” said Nadine, one of the group’s leading activists.

To prevent the court from making decisions, activists announced they will prevent justices from entering the building with a “blockade” of the vehicle entrances.

If the justices attempt to pass through the court’s security fence on foot, they said squads of activists will move to block the doors in the fence as well.

These actions could leave justices on foot in the street as verdicts go public on June 13.

Last week, a man who said he wanted to kill Supreme Court Justice Brett Kavanaugh was arrested near his home. He had an unloaded pistol locked in a case and a knife in his possession. The man called police for psychiatric help.

“We’ve also known for a lot of time that the court cannot represent us, because it does so many things that are harmful to our movements,” said Neyer.

Currently, the protest group plans to gather with a permit in a nearby square at 7 a.m., then march to the court’s vehicle entrances.

The protest was divided between activists who said they were willing to be arrested for forming a blockade and other activists who planned to “support” the ones who risked arrest.

Some activists expressed concern that police could stop a single column of marching protesters and questioned whether it would be better to fan out to reach their targets.

“Some people do have an issue with the single march plan, being that if police stopped the single march, all of the action groups would be in one place,” said Sadie, an activist with SCOTUS6.

But the protest’s leadership failed to resolve questions on how the “blockades” would work, how many people would be in each blockade, and other strategic considerations.

The meeting failed to discuss any of these topics.

Instead, the group spent nearly two hours simply agreeing on where and when to meet up before marching to the court.

At one point, someone bombed the call by streaming a pornographic video.

At another point, Sadie warned protesters to avoid a fellow protester who was “dangerous” because he planned to shut down highways to block the delivery of food, as well as “some things worse that we don’t want to affiliate with.”

Sadie said she rejected the radical’s plans because they came too early.

“We can’t afford it in this stage of the fight,” she said.

The entire time, Sadie was at a street protest while participating in the Zoom call. The shouting from people in the background disrupted the meeting.

But meeting members praised Sadie anyway and asked her to keep participating.

“We appreciate Sadie,” said activist Liz Butler. “Sadie, do you want to restate it? It was a little bit difficult to hear,” she continued, as the noise of shouting protesters drowned out Sadie’s comments to the group.

For about 30 minutes, six activist group leaders in a “spokes council” attempted to plan the protest while the other 28 people in the call did nothing.

But the planners never discussed specifics of how the group would blockade the court, divide to cover all three vehicle entrances, or respond if police stopped them.

Instead, they repeated things that had been said already and made confusing statements.

At the end of this attempted discussion, Butler asked if the group had any remaining disagreements. Leaders quickly agreed.

“I have no opinion,” another replied.

“We have consensus, folks,” Butler said.

But it wasn’t clear what the group had come to a consensus on.