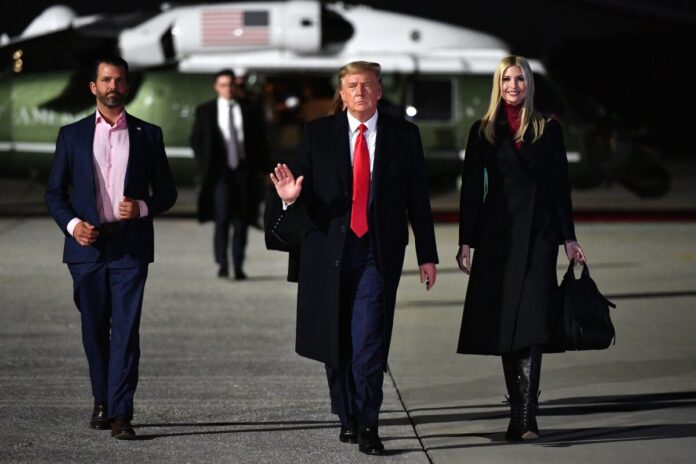 Former President Donald Trump said Ivanka Trump, his daughter and adviser, had “long since checked out” after the House Jan. 6 committee on Thursday showed a video of the younger Trump saying she accepted former Attorney General Bill Barr’s assessment of the 2020 election results.

“Ivanka Trump was not involved in looking at, or studying, Election results. She had long since checked out and was, in my opinion, only trying to be respectful to Bill Barr and his position as Attorney General (he sucked!),” Trump wrote on Friday morning on Truth Social, his social media platform.

In the clip released Thursday, Ivanka Trump was asked by the panel about her reaction when Barr claimed in 2020 that there was no significant fraud during the election.

“It affected my perspective,” Ivanka Trump said in the video. “I respect Attorney General Barr so I accepted what he was saying.”

Trump also criticized Barr for his remarks after the election, suggesting he did little to nothing when he was attorney general.

“Bill Barr was a weak and frightened Attorney General who was always being ‘played’ and threatened by the Democrats and was scared stiff of being Impeached,” the former commander-in-chief wrote on Truth Social.

Trump, meanwhile, maintained that the Jan. 6 Capitol breach was caused by election fraud and not by any remarks or statements made by him. During a rally on that day, Trump stated to his supporters: “I know that everyone here will soon be marching over to the Capitol building to peacefully and patriotically make your voices heard.”

In his second impeachment trial, Trump’s lawyers had argued that his words were not a call for violence or lawlessness.

“I NEVER said, or even thought of saying, ‘Hang Mike Pence.’ This is either a made-up story by somebody looking to become a star, or FAKE NEWS!” the former president said.

Members of the Jan. 6 House panel, which is led by Reps. Bennie Thompson (D-Miss.) and Liz Cheney (R-Wyo.), have alleged Trump was directly responsible for the breach.

“President Trump summoned the mob, assembled the mob and lit the flame of this attack,” Cheney alleged on Thursday night.

Meanwhile, some members of the Democrat-dominated House Jan. 6 panel have signaled that they are trying to generate interest in their investigation. In a recent comment, Rep. Jamie Raskin (D-Md.) said that he hopes the primetime TV airing of the committee’s claims “will tell a story that will really blow the roof off the House.”

Liz Harrington, Trump’s spokeswoman, said the committee presenting their findings on live TV is an example of how “disgustingly out of touch” members of Congress and media outlets are with everyday Americans.