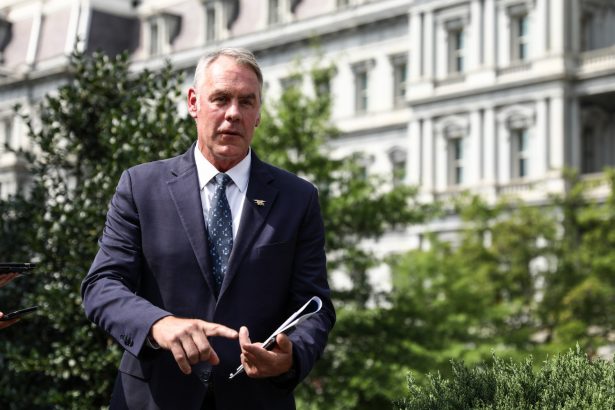 Ryan Zinke, a former Trump administration official, narrowly won the Republican primary for Montana’s 1st Congressional District on Thursday, according to results posted to the Montana secretary of state’s website.

According to the preliminary result numbers, Zinke defeated former state Senator and his closest Republican rival, Al “Doc” Olszewski by just over 1,608 votes out of 84, 543 cast in the race, with Olszewski receiving 33,633 votes and Zinke garnering 35,241.

As for the Democrat side, Missoula attorney Monica Tranel is the projected winner with 65 percent of the vote, or 36,829 votes cast, against Cora Neumann, a public health and lands advocate, with 27 percent, according to preliminary results on Montana secretary of state’s website.

Zinke, a former U.S. Navy Seal, has focused much of his campaign on fighting inflation, border security, healthy forests, and wildfire prevention and promoting public access to public lands, as well as supporting veterans, among other key issues.

He was one of five Republicans on the primary ballot for the open seat, and will now face Tranel in the Nov. 8 general election.

In a statement posted to Twitter, Zinke thanked Montanans for their “confidence that America can be fixed” and for “ignoring the political BS.”

“We have a great team and dedicated volunteers who believe in American values,” Zinke wrote. “I look forward to working with Congressman Rosendale on solving the hard issues that face America and the Great State of Montana. One State. Two US Representatives, one fight for freedom.”

Zinke represented Montana’s at-large congressional district from 2015 until 2017 before joining the Trump administration. However, he faced investigations of alleged ethics violations while participating in real estate negotiations that ultimately prompted his resignation as Trump’s interior secretary just a year later.

However, Zinke has also come under fire for allegedly using his position to undermine Montana’s environmental protections, while some opponents have called into question his military service in Iraq.

In a statement on Thursday, Olszewski conceded the race to Zinke and said he was “honored by the over 30,000 voters” who supported him through the election.

“We started as [a] big underdog and ran a race based on the conservative principles of our Republican Party. However it’s clear that we will not be victorious in this race,” the statement said. “I want to thank all my supporters and team for their help. Together we accomplished so much and I want to thank my family who was with me throughout it all.”

The results of the primary election are not yet official and will be certified by the Secretary of State Christi Jacobsen in July.