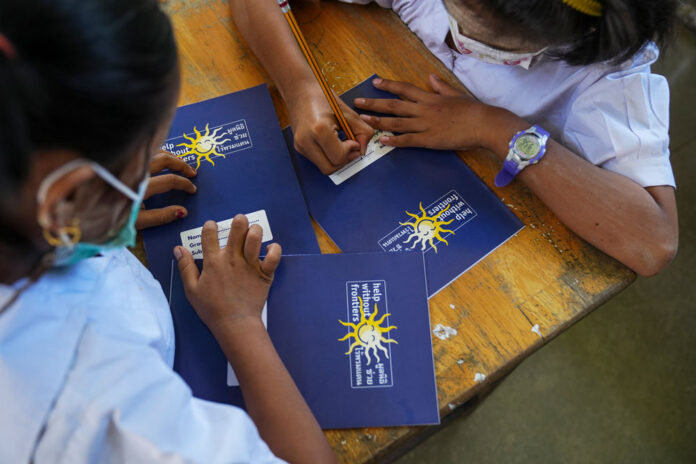 The Sukkahansa (Happy and Joy) Learning Center, located in Thailand’s Mae Sot district along the Myanmar border, welcomed Burmese children back as classes resumed on the first day of June after being shut down for more than two years because of the COVID-19 outbreak.

Many of the boys and girls had fled with their families from post-coup violence in their homeland by crossing the Moei River, which separates the two countries.

On June 1, nearly 100 students dressed in school uniforms, met with their teachers and friends at the school for the first time since the pandemic began.

The school is not part of Thailand’s formal schooling system, but provides students with instruction in Burmese and Thai. It is sponsored by the Help without Frontiers Foundation, a Thai NGO.

While Thailand for decades has harbored nearly 100,000 displaced people – largely ethnic Karen, as well as millions of migrant workers – the fighting between the Burmese junta forces and ethnic minority rebels after the February 2021 coup have worsened hardships for those who fled here from Myanmar.

About 2,000 of 12,000 students at what had been more than 70 learning centers located along the border with Myanmar have not returned to classes, said Siraporn Kaewsombat. The number of centers has shrunk to 66.

“The real problem for students at migrant learning centers is that they have no Thai citizenship so they cannot enter Thai state-run schools and have to depend on these NGO-sponsored schools,” Siraporn told BenarNews.