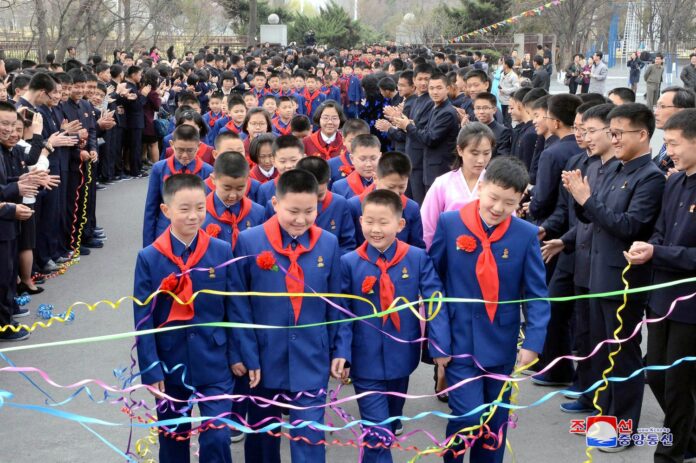 Some North Korean students will show up for school this summer decked out in high-quality uniforms made in a South Korean-built factory that has been shuttered in the wake of missile tests by Pyongyang.

Sources in the country told RFA that the company that supplies uniforms to schools in North Hwanghae province began making summer uniforms in the nearby Kaesong Industrial Complex, a joint-Korean manufacturing zone that was once a showcase of North-South cooperation.

The complex briefly closed in 2013 during a period of high tension between Seoul and Pyongyang.  In 2016 South Korea halted operations in the complex in response to a North Korean missile test, and operations remain suspended.

Though the uniforms made in Kaesong are superior, unilaterally starting up the South Korean factories could spark friction with Seoul, sources said.

“Last week, an official of the provincial Clothing Industry Management Bureau and I returned to North Hwanghae province with summer school uniforms that were able to pass product inspection. We brought them from a garment factory at the Kaesong Industrial Complex,” an official of the province, which lies just across the demilitarized zone from South Korea, told RFA’s Korean Service Tuesday on condition of anonymity for security reasons.

The bureau is responsible for making enough summer uniforms by the end of the month, after which they will be given to the province’s elementary, middle and high schools as gifts from the country’s leader Kim Jong Un, the source said.

“That’s why the bureau has been operating sewing and cutting machines in Kaesong since March, with permission from the Central Committee. They mobilized residents from Kaesong who previously worked at the industrial complex,” he said.

“Mobilization” is North Korean code for forced labor, in stark contrast to when the industrial complex was in operation and workers, at least in theory, earned several times more than their counterparts outside the complex.

North Korean use of the complex without South Korean permission might be frowned upon below the 38th parallel, but North Hwanghae is located just south of Pyongyang and is a strategic region for propaganda purposes. The students need to look their best.

“The Central Committee took special measures to use the facilities in the industrial complex… are partly because the other clothes factories in North Hwanghae are so old. But the main reason is because the Highest Dignity often visits the province to offer his guidance,” the official said, referring to Kim Jong Un’s well-documented visits to factories, farms, schools and areas hit by natural disasters, so he can be portrayed as a benevolent leader.

“It is an urgent priority to present the school uniforms to the students in a timely manner,” the source said.

Truck drivers are shipping imported fabric from Sinuiju, on the border with China, to Kaesong, for use in the factories, a source north of Pyongyang in South Pyongan province told RFA.

“I heard from a driver who brought the imported fabrics in a freight car that they are still producing clothes in the Kaesong Industrial Complex in the factories that were operated by South Korean companies,” he said, on condition of anonymity to speak freely.

“They are making winter clothes for officials.”

Since the complex closed in 2016, some of the equipment has been repurposed by companies as far away as North Pyongan province in the northwest, a source there told RFA.

“Prior to the pandemic, several of the currency earning clothing factories here moved the equipment from the garment factories in Kaesong without permission,” he said on condition of anonymity for safety reasons.

“Though clothing processing was suspended due to coronavirus lockdown measures, the industrial complex machinery here has been used to make school bags and uniforms for students in the province,” the third source said.

“Although there are homegrown garment production units… in Sinuiju, they are not as good as what was in the industrial complex. So they used it to make the school uniforms faster and with better quality.”

South Korea’s Ministry of Unification Thursday announced that it detected vehicle movement inside the Kaesong Industrial Complex, and that it was monitoring the area to determine if North Korea was operating facilities in the complex without permission.