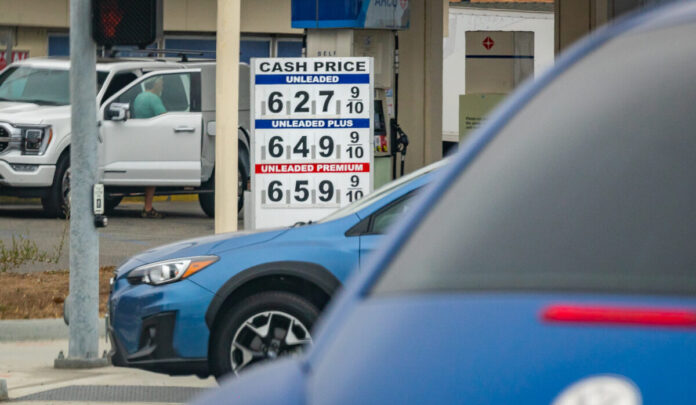 The average price for a gallon of regular gasoline reached $5, according to fuel analyst GasBuddy.

In a news release on Thursday, GasBuddy noted that it’s the “first time ever” that U.S.-wide gas prices hit $5 per gallon.

“Gas prices have surged in recent weeks as U.S. gasoline inventories have fallen over 25 million barrels, or over one billion gallons, since the start of March amidst a global decline in refining capacity,” said the firm, noting that demand for gasoline would increase this summer.

Data released by automotive group AAA also shows that the price for a gallon now stands at $4.99, and it shows that states such as New York, New Jersey, and Ohio recently eclipsed the $5 mark.

“In addition, U.S. refining capacity has fallen by some 1 million barrels per day over the last three years. All of these factors have created an environment ripe for a surge in gas prices, while Americans balk at prices but continue filling up as demand has seen little decline,” GasBuddy said.

Several White House officials this week noted that gas prices are likely to surge over the summer.

Commerce Secretary Gina Raimondo said that the Biden administration has fewer and fewer options to bring down gas prices.

“Unfortunately, that is the brutal reality,” Raimondo told CNN on Tuesday, blaming the price increase on Russian President Vladimir Putin and the Ukraine–Russia war. Gas prices and inflation had been steadily rising before the Ukraine invasion on Feb. 24.

“Since Putin moved troops to the border of Ukraine, gas prices have gone up over $1.40 a gallon. The president is asking for Congress and others for potential ideas. But as you say, the reality is that there isn’t very much more to be done,” she said.

During an appearance on CBS News a day later, Energy Secretary Jennifer Granholm was asked whether she has any reassurance to Americans suffering financial pain due to elevated gas prices.

“Yeah, this summer is going to be rough,” she told the news outlet. “I’ll just be honest with you. The Energy Information [Administration], which is the entity that projects forward the price of gas the price of oil, has said that by the fall, it should be down to $4.27 a gallon, and by late this year, early next year, it’ll be down to 4 maybe under 4, maybe high $3 a gallon.”

Granholm added: “So there will be some relief on the horizon, but during the summer driving season, it is going to be rough, no doubt about it because we have such a demand and supply mismatch on the global market for oil.”