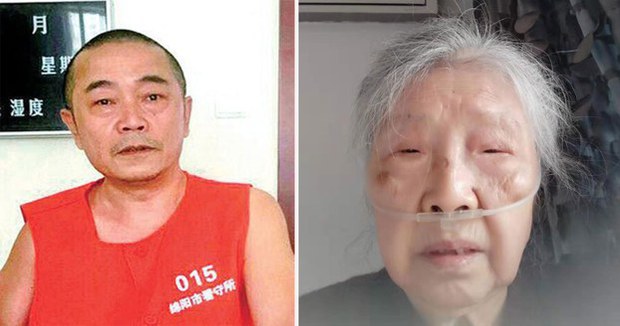 Pu Wenqing, the mother of jailed rights activist Huang Qi, says her cancer is spreading from her lungs to her liver, and has called on the ruling Chinese Communist Party (CCP) to allow her to visit her son in prison before she dies.

“Grandma Pu’s cancer has spread all over her body,” friend of Huang’s who asked not to be named told RFA. “The hospital told her to do chemo, but she was afraid she wouldn’t be able to take it, so she didn’t.”

“She is urgently asking to visit her son in prison,” the friend said, adding that Pu’s medical insurance doesn’t run to higher-quality cancer care at a hospital in the southwestern city of Chengdu, only in her hometown of Neijiang, Sichuan province.

“If she goes to Chengdu for treatment, her medical insurance will only reimburse 60 percent of the costs, and she cannot afford it,” the friend said.

Pu, who is a medical doctor, was able to speak briefly with RFA, confirming the friend’s report.

“I saw a doctor at the West China Hospital [at Sichuan University in Chengdu], and had a multi-slice CT scan,” she said. “I was diagnosed with lung cancer in … part of the right lower lobe, and there were lesions in other parts.”

“There were also changes in my ilium [and] in my liver,” she said.

Pu, 88, said she is currently living under surveillance by the state security police, who insist on escorting her to every medical visit.

She said the last time she was able to speak with Huang via video call was Sept. 17, 2020. A Jan. 28, 2022 meeting was abruptly cut off two minutes in, after she tried to discuss Huang’s defense lawyers with him.

“When the call started, there was no sound, but when it connected I could see Huang Qi arguing with the prison staff, quite fiercely,” Pu told RFA.

“Huang Qi asked me if I’d hired a lawyer for him, and I said yes,” she said. “I told him I had hired lawyer Song and another lawyer surnamed Zhang from Beijing.”

“No sooner had I finished speaking than the video call was cut off.”

The move came after Pu was told by prison authorities to make only small talk with her son.

“They told me that I wasn’t to discuss his case, and that I could only talk about daily household stuff and my illness,” she said.

Huang’s friend confirmed that two lawyers from Beijing had visited Pu recently, and sent an application to the authorities to meet with Huang Qi. It was unclear whether they had received a response.

Meanwhile, Pu said all she wants now is to see Huang one last time before she dies.

“They can’t cure it, and they can’t alleviate the symptoms, which are going to get worse,” she said. “I want to leave this world, but I still want to see my son Huang Qi for the last time.”

A court in the southwestern province of Sichuan handed down a 12-year jail term to Huang, a veteran rights activist and founder of the Tianwang rights website, on July 29, 2019.

Huang was sentenced by the Mianyang Intermediate People’s Court to 12 years’ imprisonment, after it found him guilty of “leaking state secrets overseas.”

Huang’s lawyers and Pu have said all along that the case against Huang was a miscarriage of justice, even allowing for the traditionally harsh treatment of dissidents in China.

Huang, 57, has been identified by Paris-based press freedom group Reporters Without Borders (RSF) as one of 10 citizen journalists in danger of dying in detention.

He has repeatedly denied the charges made against him and has refused to “confess.”

Huang’s Tianwang website had a strong track record of highlighting petitions and complaints against official wrongdoing, and injustices meted out to the most vulnerable in society, including forced evictees, parents of children who died in the devastating 2008 Sichuan earthquake, and other peaceful critics of the ruling Chinese Communist Party.

Until her illness progressed, Pu had been a vocal campaigner for Huang’s release on urgent medical grounds, and says the charges against him are politically motivated, with no evidence to back them up.