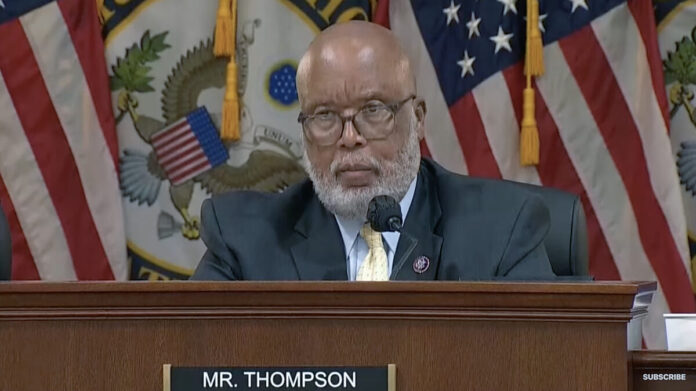 The Jan. 6 select committee launched a full-frontal assault on former President Donald J. Trump and his “riotous mob” of supporters on June 9, claiming Trump orchestrated the violence at the Capitol in early 2021 as part of a “coup” to remain in power and nullify the 2020 election results.

The two top officials on the nine-member panel described Trump as so unstable after Jan. 6 that staff openly discussed the possibility of him being removed from office using the 25th Amendment.

In the first of a series of public hearings to detail findings from its nearly year-long investigation, the committee issued blistering statements and accusations that sounded like the foundation for possible criminal charges against the 45th president of the United States.

“Jan. 6 was the culmination of an attempted coup,” said Rep. Bennie Thompson (D-Miss.), chairman of the committee, during a livestream broadcast from Washington D.C. “A brazen attempt … to overthrow the government. Violence was no accident.”

The first 60 minutes of the hearing was everything expected: hyper-partisan, with strong anti-Trump rhetoric, accented by video clips that were short on context and long on emotion. A Capitol police officer and a filmmaker testified in the second hour of the hearing.

If anyone expected a detached, academic review of alleged evidence to support what appears to be the committee’s foregone conclusion, they were left in shock.

Anyone who looked for acknowledgment of the killing of Ashli Babbitt by Capitol Police, the police beating and death of Rosanne Boyland, or any of the myriad examples of excessive force by police, was sorely disappointed.

There was no balance on this night.

Testimony from Capitol Police officer Caroline Edwards gave the appearance of linking the Jan. 7 death of police officer Brian Sicknick to her colleague being sprayed with mace at the Capitol on Jan. 6.

The D.C. Office of the Chief Medical Examiner ruled Sicknick’s death was from natural causes, caused by a stroke. Sicknick was hospitalized the night of Jan. 6 after witnesses at the Capitol noticed him exhibiting possible signs of a stroke.

Thompson reinforced the point after a break in testimony, saying the audience included “some of the family members, friends, and widows of the officers who lost their lives as the result of the attack.”

Four people died at the Capitol on Jan. 6. All were Trump supporters. Babbitt, 35, an Air Force veteran, was shot to death by Lt. Michael Byrd. Boyland, 34, was crushed in a stampede after police unleashed gas in the Lower West Terrace tunnel.

Kevin Greeson, 55, died of a heart attack, although a witness said he was struck by a projectile when a police grenade or other munition exploded near him. Benjamin Phillips, 50, had a stroke. None of those names was mentioned at the hearing.

The Democrat-heavy committee wrapped its work in patriotic language and spoke of its support for the Constitution against the domestic enemies of America.

Comments from Thompson and Rep. Liz Cheney (R-Wyo.) ridiculed the notion of fraud in the 2020 presidential election. They quoted former Republican Attorney Gen. William Barr, who called the idea “[expletive].”

Thompson referred to the nation as a “shining city on a hill,” borrowing language and sentiments from former Republican President Ronald Reagan’s 1988 State of the Union address.

It was not the America that came to Washington to protest on Jan. 6 that was being spoken of, but the nation that is prosecuting those whom they claim tried to overthrow the government and quash the 2020 election results.

“It was domestic enemies of the Constitution who stormed the Capitol and occupied the Capitol,” Thompson declared.

The hearing made clear the committee lays blame for the alleged “insurrection” at the feet of the Proud Boys and Oath Keepers, two pro-Trump groups charged by federal prosecutors with seditious conspiracy to obstruct the counting of Electoral College votes by a joint session of Congress. Thompson referred to the groups as racist, anti-government militias—terms the groups reject.

“This was like in the Soviet Union: show me the man and I’ll show you the crime,” Oath Keepers founder Elmer Stewart Rhodes told The Epoch Times from the Virginia City Jail, where he is being held without bond. “Now they’re going to gather what they think is going to be damning evidence.”

Rhodes said the “big tell” from the hearing came when they showed a still image of him with former Proud Boys leader Enrique Tarrio in a D.C. parking garage on Jan. 5, 2021. The inference was that the men were having a meeting. “That’s an absolute lie,” Rhodes said.

The committee presentation did not include full video evidence showing that the “meeting” lasted fewer than 10 seconds and consisted of a handshake and brief pleasantries.

Video distributed by criminal defense attorneys shows that Rhodes made no reference to the Capitol or events happening in Washington. Chairman Thompson referred to a Department of Justice claim that “someone” in the parking garage made reference to the word “Capitol.” Whomever that was, it was not spoken between Rhodes and Tarrio, the video shows.

The committee showed a video clip of a group of Oath Keepers walking in a military-style “stack formation” up the east steps of the Capitol on Jan. 6. Prosecutors have said one of the Oath Keepers’s goals was to search for House Speaker Nancy Pelosi (D-Cali.). Oath Keepers have said that is not true.

What was not shown is how the Oath Keepers a short time later intervened in a volatile standoff between a Capitol Police officer armed with a rifle and angry protesters in the Small House Rotunda.

According to several Oath Keepers and video evidence from journalist Stephen Horn and other sources, the group got in between the potential combatants and calmed the situation. Rhodes said one of the Oath Keepers on scene told him the situation was about to go critical, given the officer’s demeanor.

Meanwhile, Cheney said the upcoming committee hearings will detail a “sophisticated seven-part plan” that Trump devised to keep himself in power. Part of the effort involved a “massive effort to spread false information” about the 2020 election.

She said that a post Trump made on Twitter asking people to come to Washington for a rally that’s “gonna be wild” was the catalyst for the Proud Boys to allegedly plan an “invasion of the Capitol.”

One of the hearings will feature former White House aides, one of whom resigned due to Trump refusing to tell the mob to leave the Capitol, Cheney said. The White House chief counsel threatened to quit several times, she said.

After lashing out at Trump for most of her speech, Cheney warned her colleagues of lasting damage to those who supported the 45th president.

“There will come a day when Donald Trump is gone, but your dishonor will remain,” she said.

Rhodes has predicted for months that the Jan. 6 committee’s top goal is to keep Trump off the ballot in 2024 by criminalizing free speech, concocting alleged conspiracies, and tying him to everything bad that happened that day.

“They’re just strapping all of it together as though Trump planned it from the very beginning,” Rhodes said.

Anyone wanting to understand the effort to oust Trump from the public square should read Rep. Thompson’s February 2021 federal civil lawsuit against Trump, his attorney, Rudy Giuliani, the Proud Boys, and the Oath Keepers, Rhodes said. It contains the blueprint for the actions and strategy that the Jan. 6 Select Committee is now using against Trump and his supporters, he said.