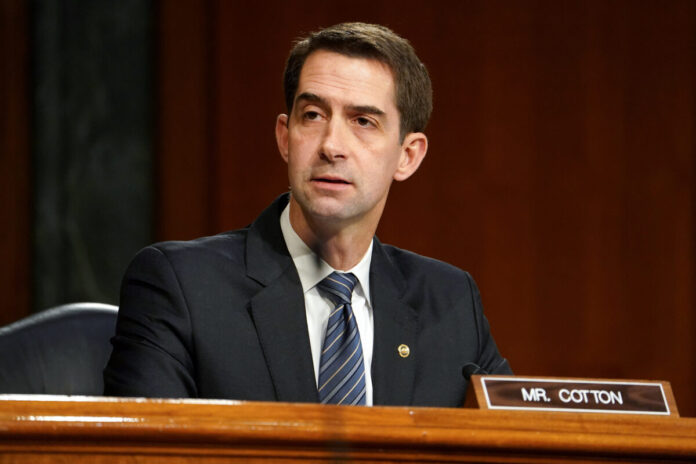 Cotton appeared for an interview on Fox News Thursday after the incident where an armed man, later identified as Nicholas John Roske, of California, was arrested on June 8 near the Maryland home of Supreme Court Justice Brett Kavanaugh.

“This is the shocking culmination of the Democratic left’s war against the Supreme Court and really against our Constitution in America,” said Cotton. “Chuck Schumer, a couple of years ago, went to the Supreme Court steps, and by name, attacked Brett Kavanaugh and said he would ‘pay the price, he wouldn’t know what hit him,’ and yesterday, a Democratic hitman showed up at Brett Kavanaugh’s house to try to murder him and presumably his wife and his children.”

Roske carried a gun and a knife with him as he exited a taxi outside Kavanaugh’s home. He was arrested after calling 911 on himself, said the charging documents.

Garland, a Biden appointee, told reporters at the Justice Department that “this kind of behavior is obviously behavior that we will not tolerate.”

Threats have escalated recently after the leaking of a Supreme Court draft opinion that could overturn the landmark 1973 decision on abortion. This includes vandalizing faith-based pregnancy centers, and firebombing a pro-life organization in Madison, Wisconsin.

Federal authorities have resisted charging protestors who legal experts say are in violation of 18 U.S.C. § 1507, which prohibits picketing or parading near a judge’s residence “with the intent of influencing” the judge.

Garland has ordered around-the-clock security for all nine justices’ homes.

Roske has been charged with violating a different law, 18 U.S.C. § 115, which bars attempting to kidnap or murder, or threatening to assault, kidnap, or murder federal judges.

Meanwhile, Senate Majority Leader Chuck Schumer (D-N.Y.) is under pressure to retract his past comments regarding Kavanaugh that some say could have contributed to provoking Roske to issue the threat.

Schumer said in March 2020 that Kavanaugh and Justice Neil Gorsuch, both Trump appointees, “have released the whirlwind and you will pay the price.”

Cotton added, “That very same night, just hours after a Democratic hitman tried to kill Brett Kavanaugh, you had left-wing street militias announcing on the internet, in public, in advance, that they’re going to violate federal law by protesting in front of the justice’s home.

“There’s an explicit federal law against protesting in front of the homes of judges or jurors. Yet again, the feckless and hapless Attorney General Merrick Garland did nothing, even though he had advanced knowledge. He should resign in disgrace. And if he won’t resign in disgrace, then we should start impeachment proceedings against him in January when we are in control of Congress. Because the rule of law in this country must be enforced evenly, irrespective of one’s political parties and views.”

The Department of Justice did not reply to The Epoch Times’ request for comment by press time.