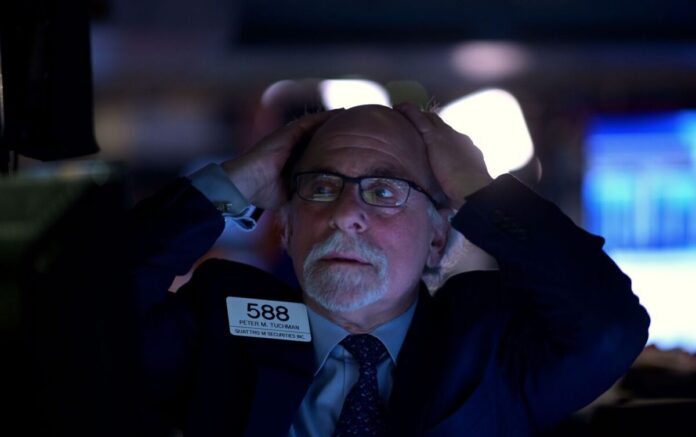 Stocks on Wall Street took a massive tumble across the board on June 10, after a highly anticipated inflation report and consumer sentiment survey produced disappointing results.

The May Consumer Price Index (CPI) report by the U.S Bureau of Labor Statistics surprised experts with a rapid rise in prices due to inflation, and bad news from the preliminary reading of the University of Michigan’s Consumer Sentiment Index (CSI) for June saw consumer sentiment hitting a record low.

The May consumer price index rose 8.6 percent year-over-year to its highest level since 1981, which is 6 percent if excluding food and energy prices, and well above the forecasted 8.3 percent increase for the main index and 5.9 percent for the core index.

Federal Reserve policymakers, however, have historically looked to the Personal Consumption Expenditures over the CPI report as their preferred inflation measure.

A massive sell-off took place on Wall Street at the end of the week for the second time in a row, with nearly every listing on the Dow witnessing losses, as falling stocks outnumber rising ones roughly nine to one.

Tech stocks are facing pressure due to higher interest rates and increasing fears of a potential recession by 2023, with shares of Netflix dropping 5.1 percent, Apple losing 3.86 percent, and Microsoft falling more than 4.46 percent.

Facing similar worries, shares of banks such as Wells Fargo and Goldman Sachs lost more than 6.07 and 5.65 percent respectively.

“We have been under the assumption that the worst of the market’s declines had been established due to chart and breadth improvements combined with high investor fear and lower valuation,” said Guy Ortmann, an analyst at Real Money.

“That assumption is now under threat given the CPI numbers and the market’s reaction. To maintain our outlook, we believe the S&P 500 and Nasdaq Composite need to close above 3,950 and 11,428, respectively,” said Ortmann.

Concerns are being raised by the decline in consumer sentiment by 14 percent since the end of May, with the CSI survey showing its lowest recorded level since the early 1980s recession.

Optimism on current economic conditions saw a drop of 12.5 percent, while consumer confidence in personal financial situations dropped by about 20 percent.

The survey also saw a steep decline in the outlook for business conditions in the year ahead, down 24 percent from May.

“The increase was broad-based, with the indexes for shelter, gasoline, and food being the largest contributors,” said the CPI report.

The energy index rose 3.9 percent in May after declining the previous month, with the gasoline index rising 4.1 percent and other major component indexes increasing.

The report showed the food index rising 1.2 percent, while the food at home index increased by 1.4 percent.

Investors are preparing for a more aggressive Federal Reserve response to the surge in prices, as the Fed is expected to announce another 50-basis-point hike next week.

The price pressures may force central bank officials to push rates even higher than expected, while many are concerned that any quick increase to the interest rate by the Fed could slow the economy to a crawl.

The 2-year Treasury yield, which is very sensitive to Fed rate hikes, jumped above 3 percent on Friday, hitting its highest level since 2008.