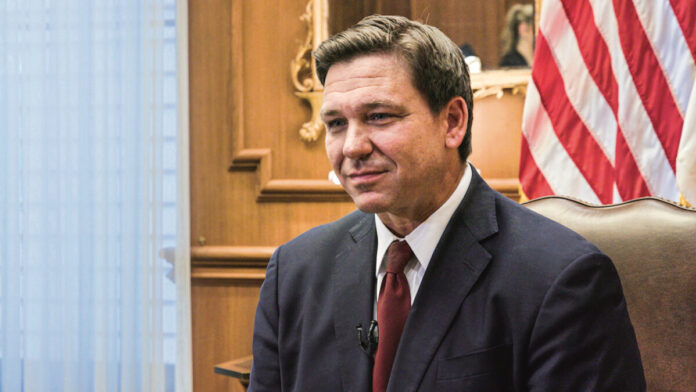 Gov. Ron DeSantis signed six bills that will aid the almost 1.5 million active and past military members and their families living in Florida, he said at a press conference in Fort Walton Beach on June 9.

“Florida is the most military-friendly state in the nation, and I am proud to continue that commitment to our military members and their families by signing these pieces of legislation,” DeSantis said.

“Providing military families with the resources they need to receive a high-quality education and find good jobs is the best way that we as a state can show our appreciation for the sacrifices that they make.”

The six bills were signed on June 9 in Fort Walton Beach where Eglin Air Force Base is located.

The new initiatives will be available to Florida residents who are both active and retired military. HB 45 will allow disabled veterans to access up to 100 percent awards of tuition and education fees.

A provision for children of military families is made through SB 430 where assistance will be available for children transferring into schools when their families are relocated.

Through SB 896 veterans will be able to apply their past service experience towards obtaining accreditation to work as teachers.

The Adjutant General of Florida Maj. Gen. Jim Eifert was standing alongside the governor and said the bills were needed and he was appreciative that the governor and the legislature recognized these need areas for veterans and their families.

“These bills will go a long way to help our citizen soldiers and their spouses have opportunities for meaningful employment,” Eifert said.

“Solid career opportunities lead to a well-rounded and ready force, and a stable home environment prepares our guardsmen and their families for deployments, to include disaster response.”

Nate Vannater, owner of Props Brewery and Grill was in attendance at the press conference and recalled he enlisted in the Air Force at 18 and utilized the “GI Bill and an ROTC scholarship to get a commission.”

“Ten years after that commission, my partners and I used a VA/SBA loan to start our business right here in Fort Walton Beach,” he told the crowd.

“I thank the governor for his support of these veterans bills. As these men and women depart the armed forces and go into the next phase of their life, these bills are really going to mean something.”

The other three bills, SB 514, SB 562 and SB 438 update the state’s definition of “Uniformed Service” to include the most recent branch of the military—the U.S. Space Force.

It will allow those who serve in that branch to have access to the same opportunities and benefits as other members of the armed forces.

In May, the governor announced the “Hometown Heroes’ Program” that launched on June 1 where he allocated $100 million to assist veterans and active military in buying their first homes in Florida. The funds will help with down payments.

The program was announced as part of DeSantis’ Freedom First Budget totaling $109.9 billion for the 2022-2023 budget year that starts on July 1.

The governor said he is sensitive to the needs of veterans and active military because he is an Iraq veteran and served in the U.S. Navy as the senior legal adviser to the SEAL Commander of Special Operations Task Force-West in Fallujah in 2007.

Jannis Falkenstern is an Epoch Times reporter who covers the state of Florida.