Democrats Failed to Extend Assault Weapons Ban in 2004. They Regret It. 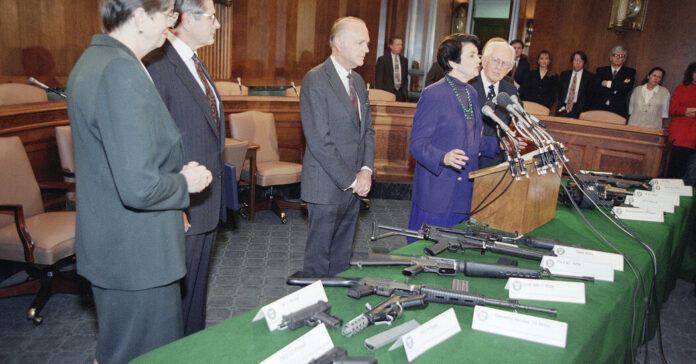 “It was hard to get the band back together,” said Adam Eisgrau, a Feinstein staff aide who helped draft the ban.

“One of the things we were able to do in ’94 was to create consensus against the Rambo-ification of what would otherwise be a standard hunting gun,” he said. “At the time, law enforcement was feeling totally outgunned. And we let people know that we didn’t think all guns were evil or that people who use guns are evil. But by 2004, things had changed, positions had hardened.”

In the end, Ms. Feinstein’s attempts to ram through a bill to reauthorize the ban failed. Over the next four years, the senator and several other legislators, including Representative Carolyn McCarthy, a New York Democrat whose son and husband were shot on a commuter train, introduced similar measures. None got out of committee.

Democratic candidates, like President Barack Obama, Hillary Clinton and Mr. Biden, have put renewing the ban on their presidential to-do lists. But Democrats, even when they controlled the White House, the Senate and the House from 2009 to 2011, did not act.

The sense of urgency that impelled action in 1994 began to intensify in 2012 with the increasing frequency and human toll of mass shootings facilitated, in most cases, by weapons that were once banned — Sandy Hook, Aurora, Orlando, Sutherland Springs, Las Vegas, Pittsburgh, Parkland, El Paso, Boulder, Buffalo, Uvalde and many others that have attracted less media attention.

“A few years ago, the family of the inventor of the AR-15 said he would have been horrified to know that its design was being used to slaughter children and other innocent lives instead of being used as a military weapon on the battlefields,” Mr. Biden said last week during a prime-time address on gun violence, proposing a new ban.

A few days later, Senator John Cornyn, a Texas Republican responsible for negotiating new gun measures for his party, rejected a renewal of the ban in any form.