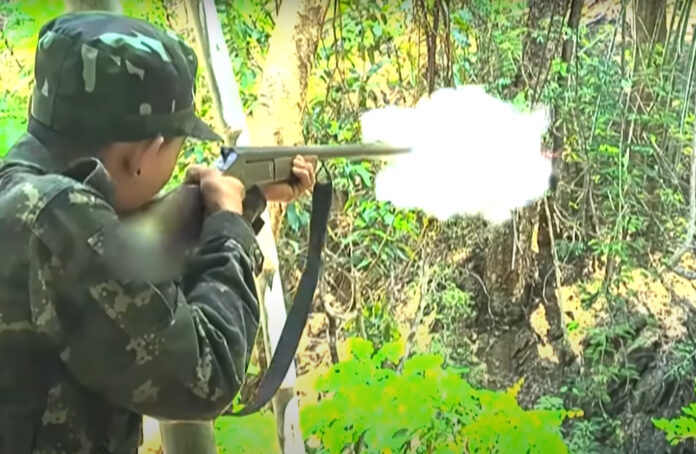 A group of ex-military servicemen in Myanmar who are assisting prodemocracy paramilitaries say skills they acquired during their past training helped them produce four types of combat weapons to battle junta troops.

Analysts told RFA Burmese that the arms manufactured by the People’s Soldier Production Team (PSPT) — a group of defectors that include graduates of the Defense Service Academy and military officials from the Directorate of Artilleries — represent a first in self-produced weapons by insurgent forces in Myanmar, although they were mixed on what effect they might have on the fight for control of the country.

Capt. Nyi Thuta, the leader of the PSPT, told RFA Burmese that the group had selected four types of guns and other weapons for production from eight it had experimented with recent months. The new weapons are already being used in military campaigns.

“We are manufacturing single-shot firearms. We also produce automatic submachine guns. They can fire single shots or empty an entire magazine,” he said.

“We are also manufacturing land mines as well as bombs that can be dropped using drones. We have plans to produce many other weapons, but we can’t disclose that information right now.”

Nyi Thuta said that PSPT weapons are of “standard quality and effectiveness,” but the group is only able to produce one-eighth of what normal manufacturers can because of limited access to equipment.

Min Zaw Oo, executive director of the Myanmar Institute for Peace and Security (MIPS), said the PSPT is the first group of defectors in Myanmar to manufacture weapons to fight the military that trained them.

“After 1988, there were also defectors from the military, but they were not able to manufacture guns because of technology limitations and lack of raw materials,” he said.

“The military troops [this resistance is] fighting has larger armory. That’s why they began to explore innovative ways to produce the weapons they need to fight. This is unprecedented.”

Minh Zaw Oo said MIPS’s research suggests that among the weapons produced by the PSPT, land mines would likely have the most devastating effect on the military.

The PSPT told RFA that its weapons workshops are based in territories controlled by ethnic armed groups and the anti-junta People’s Defense Force (PDF) paramilitary group in embattled Sagaing region but declined to provide information about the number of facilities they operate or their exact locations.

The group added that it mostly relies on raw materials available on the black market to produce its weapons, although some materials must be clandestinely imported.

Thein Tun Oo, executive director of the pro-military Thaenaga Institute for Strategic Studies think tank, said any weapons produced outside of factory settings would be largely useless against Myanmar’s military.

“The technology needed to build military weapons requires far more precision than what can be found in civilian industry. The accuracy required is on the microscale level, so I question whether that can be achieved in a regular workshop,” he said.

“Secondly, it would be nearly impossible for them to maintain consistent quality on a mass-production scale, given the lack of raw materials. … These challenges are crucial to overcome if they are hoping to win a revolution.”

However, Naing Htoo Aung, permanent secretary of the shadow National Unity Government (NUG), rejected Thein Tun Oo’s views, suggesting that with help from the NUG in securing funding and raw materials, the PSPT’s weaponry could turn the tide for the resistance.

“In this situation, improving self-production facilities, both in terms of quality and quantity, is the most helpful way to contribute to the revolution,” he said.

In a report on its achievements to mark the one-year anniversary of its founding, the NUG said that it had spent around U.S. $30 million in funding on the resistance movement, although the shadow government’s defense ministry acknowledged that it would be unable to supply the PDF with enough weaponry to meet its needs.

The NUG Defense Ministry said it is working to address the weapons shortage by improving the capacity of PSPT teams and sharing PSPT technology so that the PDF can set up duplicate production facilities.

RFA has received reports about injuries and deaths resulting from informal weapon production, which sources have attributed to a lack of experience and quality materials. The NUG had yet to respond to a request for more information on the incidents as of Thursday.

Meanwhile, the junta is using state revenue to purchase weapons from China, Russia and other nations that are being used to suppress the people of Myanmar.

On Feb. 22, former U.S. Rep. Tom Andrews, who serves as U.N. special rapporteur on human rights in Myanmar, said in a report to the U.N. Security Council that countries should stop selling arms to the junta, citing its brutal crackdown on civilians since the takeover.

The report called out permanent Security Council members China and Russia, as well as India, Belarus, Ukraine, Israel, Serbia, Pakistan and South Korea, for selling the weapons, which Andrews said are almost certainly being used by the military to kill innocent people.

According to Thai rights groups the Assistance Association for Political Prisoners, security forces have killed at least 1,929 civilians since the military’s Feb. 1, 2021, coup, mostly during peaceful anti-junta demonstrations.