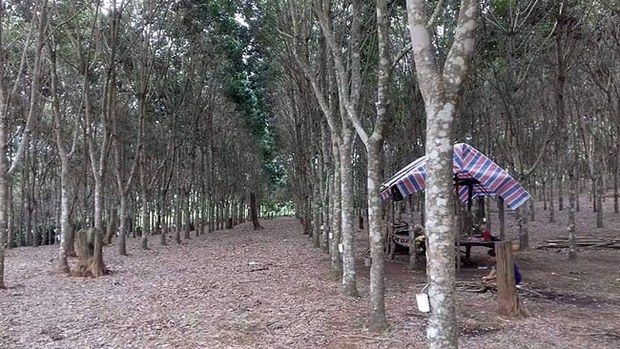 Employees of a Chinese-owned rubber company in rural Laos illegally stopped a local rubber tree farmer trying to sell his harvest to another buyer for a higher price, sources in the Southeast Asian country told RFA.

Zhongtian Luye operates a rubber processing factory in Khua district in the northern province of Phongsaly along the border with China. The company created a contract farming system with rubber tree farmers in the area to maintain supply.

It pays farmers U.S. $0.56 per kilogram ($0.25 per pound) of natural rubber. Though it has contracts with local farmers for certain quantities of their yield, nothing is stopping them from selling the rest of their crop in nearby Oudomxay province, where prices are around 25% higher.

Employees of the rubber company blocked a road to prevent a car packed with raw rubber from leaving town, a villager told RFA’s Lao Service on condition of anonymity for security reasons.

“They thought that the driver was shipping his output to sell in Oudomxay province [in breach of contract.] They also thought that he was trying to buy output from other villagers who have contracts with the company,” the villager said.

“That is why they stopped his car and took it to their camp area. Normally if a car is stopped and there is any kind of wrongdoing, it should be taken to the district police station,” he said.

Police showed up at the work camp to investigate, later ordering the company to release the driver. Zhongtian Luye did not have a contract with the man who was stopped, and the rubber was all from his own farm, the villager said.

Police fined the employees for blocking the road without permission.

A second villager said the company may feel justified in buying rubber at below market prices from local farmers because of the money it has invested in the area, including for road construction and to help farmers start producing rubber.

There also have been cases where the farmers broke their agreements with Zhongtian Luye to try to make more money elsewhere, the second villager said.

“They already signed agreements, but some farmers are not satisfied with the price set by the Chinese company,” the second source said.

“The company has a concession and the right to buy from the farmers as stated in the memorandum of understanding. However, when the trees are mature for harvesting, some farmers don’t want to sell for so low.”

A woman who used to do business with Zhongtian Luye told RFA that the company feels entitled to all the rubber produced in the area, even from farmers who are not under contract.

“They want them to sell it to their company only, even though they can get a higher price in Oudomxay,” she said.

Under the most common contract farming system in Laos, referred to as “3+2 contract farming,” companies provide funding, training and marketing services to producers, in addition to buying the product, while farmers provide land and labor. The central or local government is usually responsible for ensuring that neither party is taken advantage of.

An official from the Phongsaly province’s Department of Agriculture and Forests told RFA that Zhongtian Luye, the province and the farmers have signed production agreements. The company can decide to block roads to prevent the farmers from selling elsewhere, the official said.

“It is to up the provincial and district level authorities to consider how to solve this kind of problem and the district deputy governor will hold a meeting to find a solution,” the official said.

“But the agreement states that the rubber farmers who signed a contract-farming agreement cannot sell to other companies, but only this company,” he said, without explaining why the company has a right to prevent the farmers not under contract from selling elsewhere.

The official said the company does not tell his department the prices it pays, but said the department would meet with the company to double check that the contracts are fair.

Zhongtian Luye has been operating in Khua district since 2006. It is unknown how many farmers have contracts to produce rubber for the company.

According to the report from the Phongsaly province People’s Assembly, there are two Chinese rubber companies in the district.