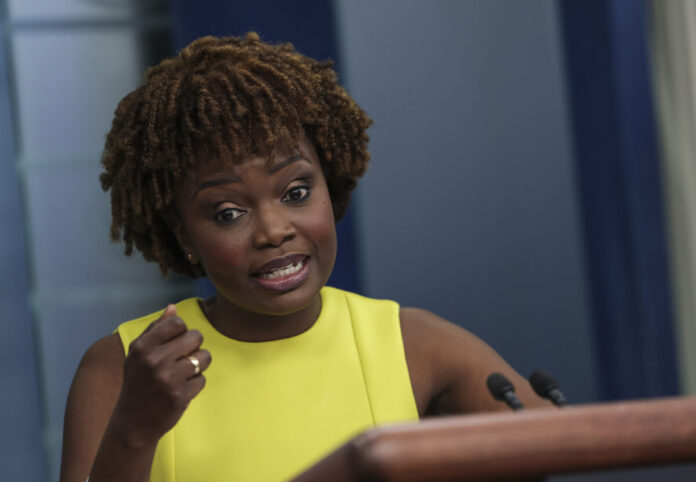 The White House has responded after a man was arrested for allegedly attempting to kill Supreme Court Justice Brett Kavanaugh on June 8.

“The president condemns the actions of this individual in the strongest terms and is grateful to law enforcement for quickly taking him into custody,” White House press secretary Karine Jean-Pierre told reporters on Air Force One en route to California.

“As the President has consistently made clear, public officials, including judges, must be able to do their jobs without concern for their personal safety or that of their families. And any threats of violence or attempts to intimidate justices have no place in our society,” she added.

Nicholas Roske, 26, of Simi Valley, California, was arrested in the early hours of Wednesday near Kavanaugh’s home in Chevy Chase. Authorities said he had a gun, a knife, and various other items, such as duct tape, and planned to break into Kavanaugh’s house and kill the justice.

Roske said in federal court in Greenbelt during his initial appearance that he “wouldn’t say I’m thinking clearly.” He said he had taken medication prescribed to him by a doctor.

According to charging documents, Roske hatched the plan because he was upset about the recent Supreme Court draft decision that was leaked. The decision indicated the court is poised to overturn Roe v. Wade, giving authority to regulate abortion back to states. Roske also expressed concern that Kavanaugh “would side with Second Amendment decisions that would loosen gun control laws.”

It wasn’t clear whether Kavanaugh, who has a wife and two daughters and was appointed by former President Donald Trump, was home when Roske was arrested.

Before boarding Air Force One in Maryland, Biden didn’t address the arrest. Some lawmakers had called on the president to personally condemn violent threats and actions against justices.

Around the same time, Attorney General Merrick Garland, a Biden appointee, told reporters at the Department of Justice that “this kind of behavior is obviously behavior that we will not tolerate” and that prosecutors would work to hold the man who was arrested accountable.

Federal authorities have neglected thus far to charge the protesters who have gathered outside the homes of Kavanaugh and others since the draft opinion was leaked with crimes, despite legal experts saying they are in violation of 18 U.S.C. § 1507, which prohibits picketing or parading near a judge’s residence “with the intent of influencing” the judge.

Protesters are seeking to convince the four justices who reportedly signed onto Justice Samuel Alito’s opinion against Roe v. Wade to shift positions.

Garland did order around-the-clock security for all nine justices’ homes, and two deputy U.S. Marshals were said to have locked eyes with Roske when he arrived outside Kavanaugh’s abode before he walked down the street and called 911 on himself.

Roske was charged with violating a different law, 18 U.S.C. § 115, which bars attempting to kidnap or murder, or threatening to assault, kidnap, or murder federal judges.

Former White House press secretary Jen Psaki told reporters in May that the White House encouraged peaceful protests outside of judges’ homes, while avoiding questions of the apparent violations of federal law.

On Wednesday, Jean-Pierre said that the Department of Homeland Security is working with partners in the government and private sector “to share timely information and intelligence to prevent all forms of violence and to support law enforcement efforts to keep our communities safe.” She also said that the president supports legislation that would fund increased security for the Supreme Court and the justices. The bill was passed by the Senate in May but remains stalled in the House of Representatives over efforts to extend protection to clerks.