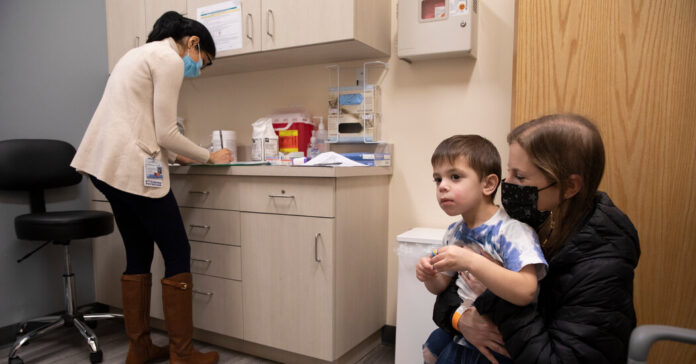 The White House has outlined the early stages of its plan for making coronavirus vaccines available this month to roughly 18 million children under 5, the last group of Americans yet to be eligible for the shots.

The Biden administration has made 10 million doses available to states and health providers; half were made available for order last week, the other half this week. It is offering equal numbers of Pfizer-BioNTech and Moderna vaccines.

Orders from states have been somewhat tepid so far, according to data that senior administration officials provided to reporters in a briefing on Wednesday evening. Of the five million doses offered last week, 58 percent of those made by Pfizer-BioNTech, have been ordered, as have roughly a third of those made by Moderna.

The officials, who spoke on the condition of anonymity to preview a formal announcement on Thursday, said the initial orders were typical of Covid-19 vaccination campaigns thus far, as states typically increase their orders over time. Still, uptake of the vaccine among children 5 to 11 has been plodding, a trend that health experts have worried could continue with the youngest group.

A Kaiser Family Foundation survey conducted in April found that just 18 percent of parents with children under 5 said they would get them vaccinated right away, while 38 percent said they would wait and see. Their hesitation could be at least partly due to the fact that the virus is typically less risky for young children.

Federal officials said on Wednesday that they expected many children under 5 to be vaccinated by pediatricians and primary care physicians. But they said they had organized a network of other locations that would work to get shots to families, including pharmacies and children’s hospitals.

To reach smaller pediatric offices and rural providers, the officials said, doses are being packaged by the hundred.

Government programs such as Medicaid, the Children’s Health Insurance Program, and the Women, Infants and Children Program will work with families to encourage vaccination, the officials said. Other groups, including the American Academy of Pediatrics, the Association of Children’s Museums and the National Diaper Bank Network, will provide educational materials.

Delivery of the vaccines is contingent on the Food and Drug Administration authorizing pediatric doses — a step that could take place as soon as next week — and the Centers for Disease Control and Prevention recommending them, which would formally initiate the campaign. The F.D.A. and its outside panel of vaccine advisers are set to meet next Wednesday to discuss the shots for young children; the C.D.C.’s own expert committee is scheduled to meet days later.

Dr. Rochelle P. Walensky, the C.D.C. director, would be the last to sign off.

Officials said that they expected vaccinations to begin in earnest the following week, perhaps starting June 21, and that all parents seeking the vaccine for their children could find doses within weeks after that.

Moderna is seeking authorization of its two-dose shot for children under 6, while Pfizer is asking regulators to clear its three-dose vaccine for those under 5.

Federal officials have said that they are not pre-empting regulatory actions by announcing distribution plans for the vaccine before it is authorized. Instead, they have said, they are working to prepare families and physicians for the possible rollout. Last year, the White House was criticized for subverting the regulatory review that usually precedes vaccination campaigns when it announced a broad booster shot campaign before F.D.A. officials or their outside advisers had weighed in, a decision that proved divisive.

The deliberations over the vaccine for the youngest children are not expected to provoke the same the kind of dissent. Parents have long clamored for the option, and were briefly given hope over the winter when F.D.A. officials worked to make an initial two doses of Pfizer-BioNTech’s shot available to children as they studied a third dose. That plan backfired when data showed that two doses did not provide significant protection against the Omicron variant.

White House officials are set to brief reporters on the distribution plans again on Thursday at 11 a.m.