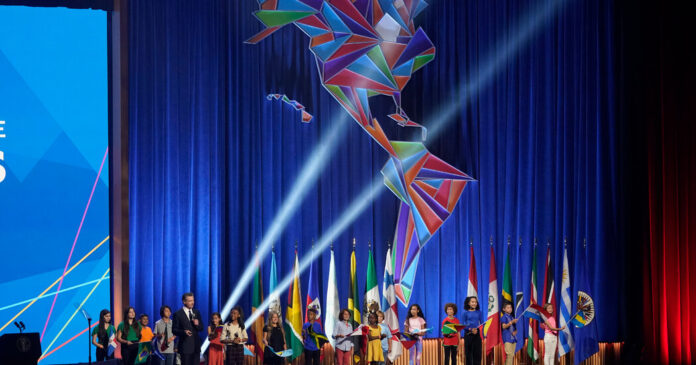 Los Angeles has transformed into a major geopolitical stage this week as President Biden and dozens of other world leaders convene here for the ninth Summit of the Americas.

If you aren’t already familiar, the Summit of the Americas happens about every three years and brings together representatives from countries in the Western Hemisphere to tackle issues such as immigration, trade and poverty.

The U.S. hasn’t hosted since the very first one in 1994, which President Bill Clinton oversaw in Miami. The Biden administration chose Los Angeles this year because of its “deep and robust ties throughout our hemisphere,” including being home to the largest Latino community in the nation, according to the administration.

City residents speak more than 224 languages, hail from 140 countries and show “our hemisphere and the world the best of American society,” the administration said.

Speaking on Wednesday evening at the event’s opening ceremony, Gov. Gavin Newsom told the audience that 27 percent of Californians are foreign-born and half of the state’s children have at least one parent who is born elsewhere.

California is also a key player on climate change, immigration and Covid-19 policy, topics that leaders are expected to discuss over the next few days. The official theme of this year’s summit, which will take place largely at the Los Angeles Convention Center, is “Building a Sustainable, Resilient and Equitable Future.”

“California is a place where ambitions and dreams become reality, and so we all gather in L.A. this week for the Summit of the Americas with big ambitions,” Vice President Kamala Harris said at the event, after calling herself “a proud daughter of California.” Harris also has been responsible for working on Central America migration issues for the administration.

Despite the hopeful tone, the event has gotten off to a rocky start. The Biden administration insisted that the leaders of Cuba, Nicaragua and Venezuela not attend the summit, which prompted a number of other Latin American leaders, including the president of Mexico, to boycott the event.

That’s a particular blow to Los Angeles, which is home to more immigrants from Mexico and the rest of Central America than anywhere else in the nation, according to the Migration Policy Institute.

“I don’t think this summit was well timed or is destined for great things,” Andrés Rozental, who was the deputy foreign minister of Mexico for six years, told my colleague Michael D. Shear. “I don’t hold an enormous amount of hope for any major breakthroughs. People will be skeptical, and then they’ll have to wait and see if anything comes out of it.”

Meanwhile, a caravan of thousands of migrants is making its way north through Mexico in the hopes of crossing into California while Biden is here, a reminder of the problems at the border that have plagued his presidency.

Today’s tip comes from William Hildebrand, who recommends the Lost Coast in Humboldt and Mendocino Counties:

“It’s called the Lost Coast for a reason. It was so inaccessible the coast highway had to be run to the east. You won’t find crowds or luxury. Getting there, staying there and exploring the area require some work. The best places always do.

The reward is nothing short of spiritual: to bask in the silence of deep forest, feeling the timeless presence of towering redwoods lining crystalline rivers. Hiking the shoreline, the sheer power of nature is on full display — the tectonic forces of the three plates colliding just off shore, the ever-present wind and pounding surf. The blend of beauty and danger is intoxicating, one feels fragile, awed and humbled.”

Frida Kahlo was in her early 20s when she and Diego Rivera first arrived in San Francisco, a place that the young artist had dreamed about for years.

During the couple’s journey to San Francisco in 1930, Kahlo doodled a portrait of herself set against a backdrop of how she imagined the city to be.

“When they get to San Francisco, she shows it to Diego and he just marvels at how much it looks like what they’re seeing before them, kind of like she already knew what it was going to look like even though she’d never been,” Celia Stahr, a University of San Francisco professor, told KQED. “So there’s a sense of destiny that she was supposed to come here.”

Read more about how Kahlo’s time in San Francisco shaped her career as an artist.

Thanks for reading. I’ll be back tomorrow. — Soumya

Mariel Wamsley contributed to California Today. You can reach the team at CAtoday@nytimes.com.