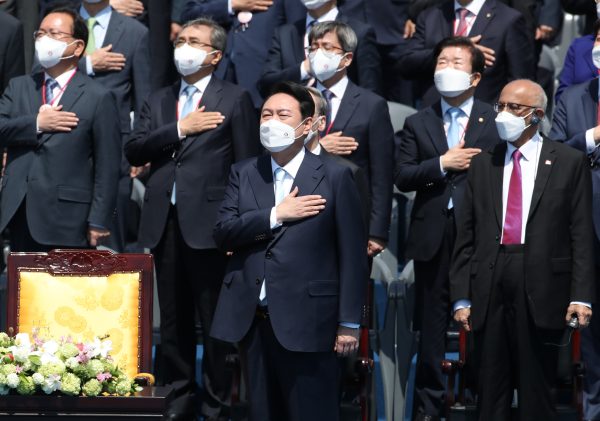 President Yoon’s determination to do away with gender quotas in his Cabinet and elsewhere could have a devastating impact on South Korea.

After narrowly winning a deeply contentious race, South Korean President Yoon Suk Yeol appears to be backtracking on a campaign pledge to abolish the Ministry of Gender Equality and Family (MOGEF). While this is a positive development, it is certainly not an about-face from the new conservative administration, which has repeatedly expressed skepticism about the existence of persistent and structural discrimination against women in South Korea.

Of particular note is that the new president has dropped his liberal predecessor’s explicit commitment to appoint women to a share of presidential cabinet posts and is likely to roll back similar quotas from other parts of the public sector. Reversing course on this precedent could have a devastating impact on a country that already has very low numbers of women in political leadership positions and make it increasingly difficult to address gender-based disparities in wellbeing.

Yoon’s predecessor, President Moon Jae-in, faced heightened scrutiny during his tenure (2017-2022) for adopting a quota system to ensure female representation in public positions. While Moon fell short of his initial promise to fill 30 percent of cabinet posts with women (and farther short of standards observed in other advanced democracies), 27.8 percent of appointees in the administration were female. In addition, the Ministry of Education announced in 2020 that national universities must increase the proportion of women professors from the current 16 percent to 25 percent by 2030.

Through these persistent efforts, the proportion of women in high-ranking government positions reached 10 percent for the first time in 2021. This is particularly significant as OECD surveys show that reduced female representation in positions of authority diminishes the influence of women in all spheres of life.

Enforcement of a gender quota helps overcome the entrenched prejudices and structural barriers that prevent women from attaining public positions. Studies indicate that female politicians face greater scrutiny around their political experience and background vis-à-vis their male counterparts. This means that ministerial appointments are likely to skew toward men even when there are equally capable female candidates if the government is not consciously mindful of structural gender biases.

While some Korean pundits and politicians criticized the gender quota as reverse discrimination, the increase in female personnel in the Moon administration corresponded with some improvements in several quality of life indicators. Child support payments were expanded, and subsidies for single parents more than doubled between 2017 and 2019.

Improvements in the public sector approach to these social issues accompanied wider changes in the private sector. The share of parental leave taken by fathers increased from 1.4 percent to 21.2 percent between 2009 and 2019. Correspondingly, South Korea’s notorious gender wage gap also closed slightly during the course of the Moon administration, falling from 34.6 percent in 2017 to 31.5 percent in 2021. In a 2020 survey, 43.2 percent of respondents also reported a reduction in gender discrimination during traditional holidays when women typically take on a disproportionate share of household and emotional labor.

These achievements notwithstanding, South Korea still has a lot of ground to cover to achieve gender parity. According to the Ministry of Employment and Labor in 2020, an average salaried female employee still earned only 67.7 percent of what her male counterpart received. This disparity only worsens as women age. According to the National Statistical Office, the average monthly wage for women in their 50s can fall to around 56 percent that of men in the same age category. This inequity worsens further yet when one takes into account that women disproportionately make up subcontractors and other irregular positions in the labor market that are both paid less and have fewer opportunities for wage growth than salaried employees.

In this context, the new Yoon administration’s decision to abandon the gender quota among policymakers and practitioners renders the long-term attainment of equality more uncertain. After being criticized for initially appointing only three women to the top 19 cabinet positions, Yoon named three more female nominees. While this move temporarily places the gender ratio of his cabinet on par with that of the Moon administration, without an explicit gender quota future ministerial appointments and personnel decisions in the rest of the government will defer to men. This creates risks that the government will ignore or sideline women’s interests and issues in public policy, further entrenching existing inequalities.

South Korea under the Moon administration represented one of many governments around the world testing different policy initiatives to secure greater gender parity. Japan under Prime Minister Shinzo Abe placed emphasis on expanding female labor participation; however, this has so far fallen short of achieving meaningful equality as most increases occurred with women joining the workforce as part-time or lower-level employees. Meanwhile, Italy adopted legislation to ensure female representation in corporate supervisory boards. This effort too has shown mixed results as successful expansion of women on boards of large companies has not yet led to significant increases in the female share of top-earners in the private sector.

The Moon administration’s approach sought to replicate what Sweden has already achieved – 12 of 23 current government ministers in the country, including the prime minister, are women. Similarly, nearly 50 percent of the Swedish parliament are women (vs. 19 percent in South Korea). While women’s average monthly salary in the country is still 90.2 percent of that of men, this disparity is a far cry from one suffered by South Korean women (67.7 percent). Moreover, Sweden ranks among the top nations in multiple surveys on “best countries for women.” These achievements can be partly attributed to an equal share of female voices in policymaking and the presence of the Swedish Gender Equality Agency to consciously integrate a gender perspective in all public sector operations.

Despite successes demonstrated in Sweden, Yoon’s South Korea will be embarking on a natural experiment on whether a country can achieve greater wellbeing for women, or even maintain recent gains, without consciously tackling gender bias within its own government. This too may become a valuable, albeit painful case study, for South Korea and the rest of the world.