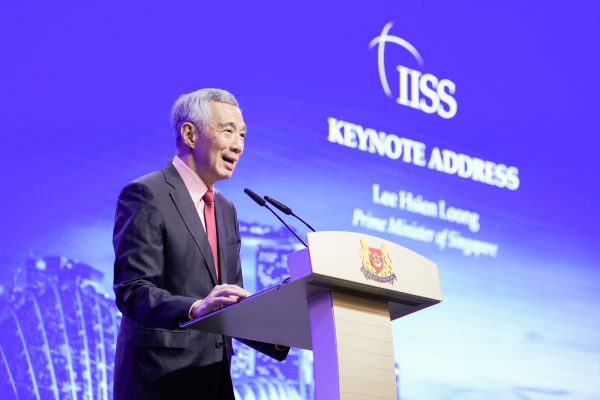 Taiwan, Ukraine, and growing U.S.-China competition are all expected to figure during the three-day conference. 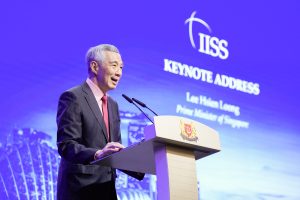 Singaporean Prime Minister Lee Hsien Loong delivers the keynote address at the 18th Shangri-La Dialogue in Singapore, on May 31, 2019.

After a two year pandemic-enforced break, Asia’s premier security dialogue returns tomorrow, and is expected to see China and the United States spar over a range of issues, from Taiwanese sovereignty to the ongoing war in Ukraine.

The IISS Shangri-La Dialogue, which is organized by the London-based International Institute for Strategic Studies, will take place June 10-12 in Singapore, during which military officials and diplomats from more than 30 countries will converge on the city-state for discussions on a range of pressing regional and international topics. Above all, the dialogue will mark a welcome return to face-to-face diplomacy after two years of key meetings being carried out via the stultifying medium of Zoom.

Among the 30-odd confirmed speakers is Japanese Prime Minister Kishida Fumio, who is booked to deliver the Dialogue’s keynote address tomorrow, the first by a Japanese leader since an address by then Prime Minister Abe Shinzo in 2014.

Much attention will also be on the speeches by U.S. Defense Secretary Lloyd Austin, who will address the conference on Saturday, and Chinese Defense Minister Gen. Wei Fenghe, who will follow him on Sunday. The latter two speeches are expected to see Austin and Wei outline their respective nations’ visions for the Asian region, as well as lobbing the occasional barbed remarks in the other’s direction.

The Shangri-La Dialogue, which was first held in 2002, comes at a time of increasing global geopolitical turbulence. In recent months, Washington and Beijing have clashed over a range of issues, including the future trajectory of Taiwan, Chinese actions in the South China Sea, and China’s recent attempt to expand its influence in the South Pacific, while the U.S. has unveiled the Indo-Pacific Economic Framework (IPEF), designed to push back against Beijing’s expanding footprint in the region.

While the Dialogue is usually focused on Asia, the war in Ukraine is set to dominate the three-day agenda, as Russian President Vladimir Putin’s armies continue to grind away at Ukrainian resistance in the Donbas. Ukrainian President Volodymyr Zelenskyy will address the conference via video-link, and the U.S. delegation will seek to convince Asian nations to step up their support for the embattled Ukrainian government, while reassuring Asian allies and partners that despite its massive commitment of arms to Ukraine, it remains committed to the region. China’s aim is somewhat the reverse:  to reassure its neighbors, if it can, that it does not intend to dominate its region by force.

As well as being a venue for civilized public sparring, the dialogue’s value lies in the fact that it also permits officials from rival states to mingle and exchange frank views in sideline meetings. In this vein, Wei and Austin are expected to hold a face-to-face meeting on the sidelines of the dialogue, their first since President Joe Biden took office more than two years ago. “We expect, from our perspective, the substance of that meeting to be focused on managing competition in regional and global issues,” a senior U.S. official told Reuters. Wei and then acting U.S. Secretary of Defense Patrick Shanahan did the same during the last Shangri-La Dialogue in 2019.

Back then, Singapore’s Prime Minister Lee Hsien Loong delivered a much-discussed keynote speech in which he criticized both the U.S. and China and warned that their tensions were ushering in “a more divided and troubled world” – words that would well stand as the tagline for this year’s dialogue.