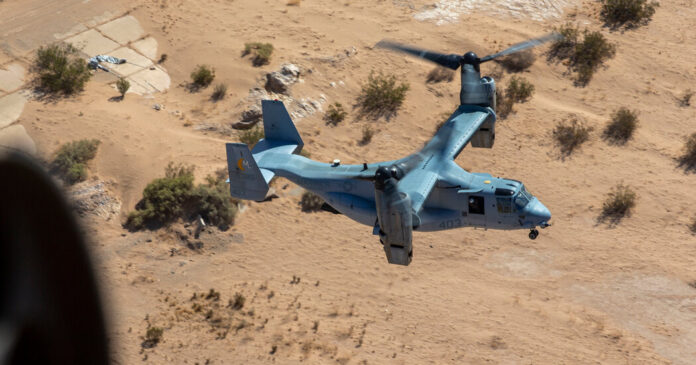 A military aircraft carrying five U.S. Marines crashed in Southern California on Wednesday, according to a spokesman for the U.S. Marine Corps.

It was not immediately clear how many survived the crash, the spokesman, First Lt. Duane Kampa, said.

The aircraft, an MV-22B Osprey that belonged to the 3rd Marine Aircraft Wing, crashed about 1 p.m. in a remote area near Highway 78 and Coachella Canal Road, which is near the Naval Air Facility in El Centro, Calif., about 100 miles east of San Diego, the authorities said.

The cause of the crash was under investigation.

The Naval Air Facility in El Centro said that “contrary to initial reports, there was no nuclear material on board the aircraft.”

The crash came almost three months after four Marines were killed in Norway during a NATO training exercise while using the same type of aircraft, an MV-22B, which can be operated as a helicopter or a turboprop aircraft, according to the U.S. Navy.

The aircraft’s main use for the U.S. Marine Corps is the “transportation of troops, equipment and supplies from ships and land bases for combat assault and assault support,” according to the U.S. Navy.

In late March, a small U.S. Navy plane crashed along Virginia’s Eastern Shore, killing one crew member and injuring two others. That plane was an E-2D Hawkeye.