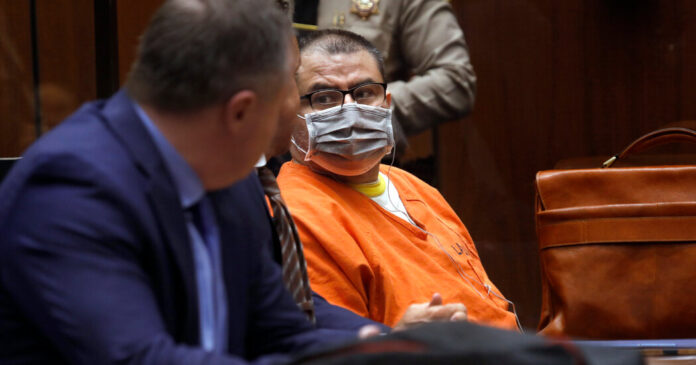 LOS ANGELES — The leader of La Luz del Mundo, a Mexico-based church that claims to have more than one million followers worldwide, was sentenced on Wednesday to more than 16 years in prison for sexually abusing three minors.

The head of the church, Naasón Joaquín García, 53, was sentenced in Superior Court in Los Angeles after reaching a plea deal with prosecutors last Friday before a trial that was set to begin this week.

He pleaded guilty to two counts of forcible oral copulation involving minors and one count of a lewd act upon a child who was 15 years old, California’s attorney general, Rob Bonta, said in a statement last week. Mr. García will be required to register as a sex offender for life.

During Wednesday’s hearing, survivors gave accounts of how Mr. García had harmed them, including one who said that Mr. García had told her it was a “blessing” to be with him.

“As he raped me, he would command me to seal my lips to preserve the blessing he was granting me, and I did,” the woman said, according to video footage from the hearing published by The Associated Press.

The sentencing judge, Ronald Coen, told the survivors, “The world has heard you.”

The sentencing came after a yearslong investigation led by the California Department of Justice of Mr. García and some of the members of La Luz del Mundo who they say enabled his abuse of children.

Mr. García is considered by the church, which has locations in the Los Angeles area, to be an apostle of Jesus Christ.

He was arrested at the Los Angeles airport in June 2019 and was charged with more than a dozen sex crimes, including allegations that he forced children to have sex and made them pose naked for photos, the authorities said at the time.

The crimes occurred from 2015 until 2018 in Los Angeles County, the authorities said.

In the initial complaint, filed in June 2019, prosecutors said there were four victims, three of whom were children. According to the complaint, one child and a woman were raped. Mr. García was also accused of human trafficking and forcing children to perform oral sex. Children were told to perform “flirty” dances for Mr. García wearing “as little clothing as possible,” according to the complaint.

Mr. Bonta, the attorney general, said in a statement that while Mr. García’s 16-year, eight-month prison sentence could never “undo the harm and trauma” he had caused, it sent a message that abusers would be held accountable. The sentence, he said, was a “critical step forward for justice.”

Others, however, said they were disappointed by the outcome.

“It’s a travesty of justice,” said Deborah S. Mallgrave, a lawyer who represents another woman who says in a separate civil matter that Mr. García had abused her.

Ms. Mallgrave said she was horrified that, given the victims’ testimony, Mr. García had been able to reach a plea deal instead of serving life in prison.

“He should be locked away, and someone should throw away the key,” Ms. Mallgrave said, adding that abuse within La Luz del Mundo was generational and systemic. “It should be nothing short of a lifetime sentence.”

In a statement posted to Twitter on Wednesday, La Luz del Mundo, which translates to “The Light of the World” in English, said that its confidence in Mr. García “remains intact” and that he would continue ministering the church.

Mr. García accepted the plea deal in order to “spare the church and his family from weeks of unfounded public accusations,” the church said.

In 2019, two other people affiliated with the La Luz del Mundo, Susana Medina Oaxaca and Alondra Ocampo, were also arrested. On Friday, Ms. Oaxaca pleaded guilty to a charge of assault likely to cause great bodily injury, the attorney general’s office said.

In 2020, Mr. Ocampo pleaded guilty to three felony counts of contact with a minor for the purposes of committing a sexual offense, and one count of forcible sexual penetration, the attorney general’s office said. He remains in custody and is awaiting sentencing.

The authorities have identified a fourth person affiliated with the church who is being sought as part of the investigation. That person, Azalea Rangel Melendez, remains at large, the attorney general’s office said.