Jan. 6 Committee Is Used to ‘Abolish Electoral College’ and as a ‘Cover Up’ for Pelosi: House Republicans 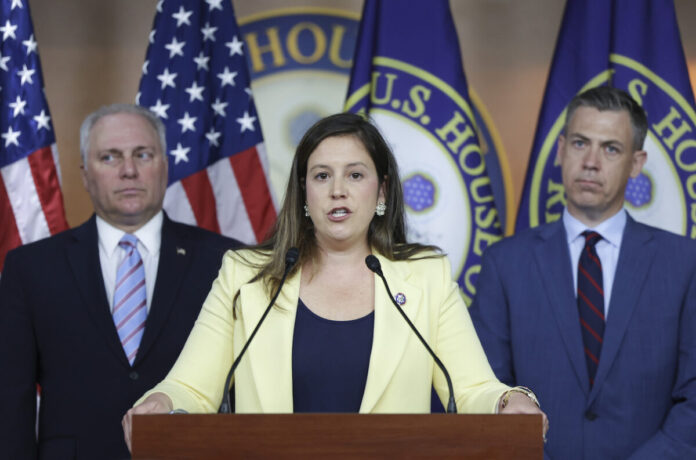 House Republicans on Wednesday spoke out against the Jan. 6 Committee, accusing the entire effort of being a “partisan witch hunt” used by Democrats to abolish the Electoral College as well as to help cover up what House Speaker Nancy Pelosi (D-Calif.) does not want the public to know about matters surrounding the events of Jan. 6, 2021.

“This committee is not about seeking the truth. It is a smear campaign against President Donald Trump, against Republican members of Congress, and against Trump voters across this country,” Rep. Elise Stefanik (R-N.Y.), the House Republican Conference chair, said at a press conference—the first of several events pushing back against the Jan. 6 Committee’s public hearings that are set to begin Thursday.

“It does not serve any true legislative or oversight purpose. And it is not about finding out why Nancy Pelosi left the Capitol so ill-prepared that day … and it will not prevent another January 6 from happening,” she added. Stefanik had previously accused the Jan. 6 panel of being a political weapon “used to cover up for Nancy Pelosi’s failures.”

Stefanik also accused Democrats and the Biden administration of “scrambling to change the headlines, praying that the nation will focus on their partisan witch hunt instead of [Americans’] pocketbooks,” noting how Americans are currently facing soaring gas prices, high inflation, and a shortage of baby formula.

Rep. Jim Jordan (R-Ohio) told reporters on Wednesday, “Regarding January 6, I think the goal is been stated. Mr. Raskin stated that their goal is to end the Electoral College and the goal is to stop President Trump from running in 2024, plain and simple.”

Rep. Jim Banks (R-Ind.) said that “based on reports over the weekend, that the committee is being used to advance the radical Democrat agenda that includes abolishing the electoral college.”

The two Republicans’ remarks come after Axios reported on June 6, citing anonymous sources, that Rep. Jamie Raskin (D-Md.) “has argued that the Electoral College should be abolished”—a stance reportedly concurred by Rep. Adam Schiff (D-Calif.) but opposed by Rep. Liz Cheney (R-Wyo.), per the outlet. The Epoch Times cannot independently verify the details reported by Axios.

The Jan. 6 panel, which has nine members, has been criticized for its apparent partisanship, in part because the only two Republicans on the panel—Rep. Adam Kinzinger (R-Ill.) and Cheney—are both known for their strong opposition to Trump.

“This [Jan. 6] committee is unconstitutional. It is illegitimate. It was not put together according to the rules of the House,” Stefanik said, in reference to how Pelosi had selected Kinzinger and Cheney after refusing to seat Jordan and Banks on the committee.

The two were selected to be on the panel by House Minority Leader Kevin McCarthy (R-Calif.), but Pelosi rejected them, saying at the time: “As legislation allows, I didn’t accept [Jordan and Banks] as they had made statements and taken actions that I think would impact the integrity of the commission of the committee.”

Banks said on Wednesday that the Jan. 6 Committee is not just a “partisan witch hunt” or a potential attempt to abolish the Electoral College, but “also a cover up.”

“Speaker Pelosi blocked us because she’s afraid of what a real investigation would uncover,” Banks said while Jordan stood behind him. “She doesn’t want Americans to find out what really happened on January 6, and leading up to it. And she doesn’t want anyone asking questions about her role and her responsibilities and securing the United States Capitol.”

Banks said that the committee is “refusing to answer basic questions about January 6, in fact blocking these questions from even being asked questions that must be answered to keep the capital safe, and to prevent another riot or incident like January 6, from ever happening again in the future.” He listed some of the questions at the press conference.

“First of all, Capitol police officers we now know were half-staffed on January 6, ‘because of COVID.’ How is that?” Banks asked.

Banks asked about why some Capitol police officers were under-equipped, with some officers having had to use expired helmets or no helmets at all while they faced some rioters. He also asked why the U.S. Capitol police “never trained to deal with riots after all of the riots that were going on in the summer of 2020.”

“Did Speaker Pelosi communicate with the house sergeant at arms on January 6, or in the days leading up to the riot?” he asked in a fourth question.

Maj. Gen. William Walker, who was then the commanding general of the D.C. National Guard, said in March 2021 that deployment of guardsmen was delayed on Jan. 6, 2021, after the breach of the U.S. Capitol building, because of a memo issued a day prior that barred the use of the Guard’s “Quick Reaction Force” without approval. The memo was issued by then-Army Secretary Ryan McCarthy. Walker, who is now the House sergeant-at-arms, had said that if the memo wasn’t issued, he would have immediately sent troops to the Capitol following the breach. Instead, it took him over three hours to get the approval from Pentagon officials to deploy that day.

Banks had three more questions he relayed to reporters on Wednesday.

“Six—why didn’t the Capitol Police intelligence unit raise the alarm about potential violence when they had evidence and intelligence for weeks leading up to January 6 that something violent could happen at the Capitol that day?

“Seven—why did the FBI deploy commandos to Quantico on January 3, with shoot-to-kill authority, but failed to send the U.S. Capitol Police a single threat assessment or intelligence bulletin?

“Eight—why did the House Sergeant-at-Arms refuse to cooperate with the Senate Homeland Security’s bipartisan January 6, investigation?”

Banks said that he and Jordan were prepared to ask the above questions if they had not been blocked from the Jan. 6 Committee by Pelosi. “Pelosi blocked us because she knows that those questions leave a trail of breadcrumbs right back to [her] office.”

“The American people are sick and tired of what they’re getting out of this … they’re tired of the theatrics. They want their congressmen and women to focus on the issues that matter most to them. But instead, this is what we’re left up to. It’s a shame. And I believe that will backfire big time on these Democrats as we near the election to come.”

The Epoch Times has reached out to the offices of Pelosi and Jan. 6 Committee Chairman Bennie Thompson (D-Miss.) for comment.