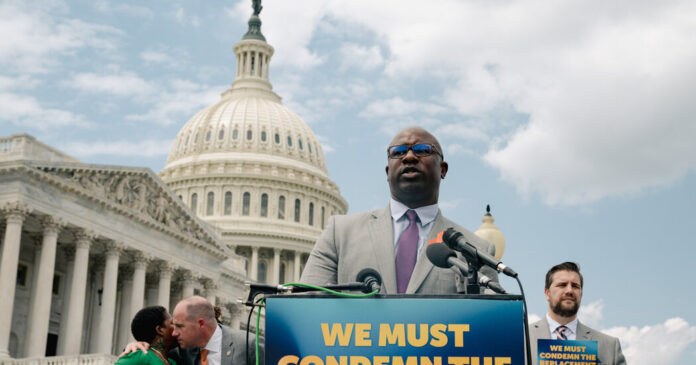 WASHINGTON — House Republicans voted en masse on Wednesday against a resolution condemning a white supremacist conspiracy theory, after Democrats tacked it onto a procedural measure to advance gun control legislation, effectively daring the G.O.P. to oppose it.

The resolution condemned the so-called great replacement theory, the belief that Western elites want to “replace” and marginalize white Americans, which apparently motivated the gunman who slaughtered 10 Black people at a supermarket in Buffalo last month. The measure, which also opened an hourslong debate on legislation to prohibit the sale of semiautomatic weapons to people under the age of 21 and ban the sale of magazines that hold more than 15 rounds of ammunition, passed 218 to 205, with Republicans uniformly opposed.

Republicans are also all but unanimous in their opposition to Democrats’ gun control package, and it is exceedingly unusual for members of the minority party to vote in favor of the majority’s procedural measures in any case. By including the resolution on replacement theory, Democrats were seeking to put Republicans on the spot on the issue.

The resolution, sponsored by Representative Jamaal Bowman, Democrat of New York, honored the Buffalo shooting victims and denounced the ideology that appears to have motivated their killer, calling it “a white supremacist conspiracy theory that has been used to falsely justify racially motivated, violent acts of terrorism domestically and internationally.”

“We cannot continue to carry on as if this hatred is an undeniable part of American culture and cannot change,” Mr. Bowman said. “We must combat white supremacy. I refuse to be complicit in this hatred because we have failed to take a stand as a nation.”

Democrats have criticized Republicans for failing to condemn replacement theory, noting that some of them have voiced similar themes with nativist language about immigrants, such as calling them invaders and suggesting they are being sent into the United States to dilute the votes of native-born Americans.

“Many individuals in positions of power and media institutions with widely viewed public platforms have contributed to the normalization and legitimization of the underlying principles of the great replacement theory,” the resolution asserted.

The theory has become an engine of racist terror, helping inspire a wave of mass shootings in recent years. And in Republican politics, it has slowly migrated from the far-right fringes of discourse to the center.

“For many Americans, what seems to be happening or what they believe right now is happening is, what appears to them is, we’re replacing national-born American — native-born Americans to permanently transform the landscape of this very nation,” Representative Scott Perry, Republican of Pennsylvania, said earlier this year at a hearing on immigration.

Some Republicans, including Senator John Thune of South Dakota, the No. 2 Republican, have condemned the theory. But many have ducked questions about it and resisted calls to break with the politics of nativism and fear that animate their core supporters.

“Notably absent is the condemnation of our leaders on the right,” said Representative Mark Takano, Democrat of California, “who refuse to speak out against this senseless violence and call for what it is: hate speech meant to divide us.”

In addition to every Republican, two Democrats, Representatives Elissa Slotkin of Michigan and Jared Golden of Maine, also voted no. Mr. Golden previously opposed gun control legislation passed by the House, and a spokesman for Ms. Slotkin said her vote was to protest the way Democratic leadership had lumped the gun control measures together in one package.