Galapagos Tortoise From Species Thought Extinct For 100 Years Is Found 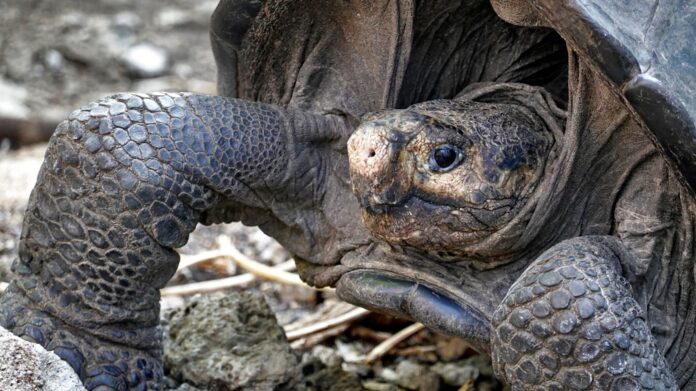 Researchers confirmed Thursday that a lone giant tortoise found wandering on an active volcano in the Galapagos is actually the only known member of a species thought to have become extinct more than 100 years ago.

Scientists first found a female giant tortoise on the Galapagos’ Fernandina Island, which consists of a largely unexplored volcano, in 2019 in a clump of vegetation amid extensive lava fields. Though researchers had hoped to find a member of the species Chelonoidis phantasticus, also known as the fantastic giant tortoise, they expected the tortoise was actually a different species that may have been moved or carried to the island by a hurricane, rather than a native creature.

They dubbed her Fernanda.

To help uncover the mystery of Fernanda’s origin, researchers at Princeton and Yale fully sequenced Fernanda’s genome as well as the genome from the only other specimen of Chelonoidis phantasticus known to science, collected in 1906, and compared the data to every other living Galapagos giant tortoise species.

“We saw — honestly, to my surprise — that Fernanda was very similar to the one that they found on that island more than 100 years ago, and both of those were very different from all of the other islands’ tortoises,” Stephen Gaughran, a co-author of a paper published Thursday in the journal Communications Biology.

A tortoise from a Galápagos species long believed extinct has been found alive and now confirmed by #PrincetonU researchers to be a living member of the species.

The tortoise, named Fernanda, is the first of her species identified in more than a century. https://t.co/ldRmyMNun5

The “fantastic” element refers to the shape of the males’ shells, which feature “extreme flaring along the outer edge and conspicuous saddlebacking at the front.” Fernanda is thought to be “well over” 50 years old, but the researchers said the island’s limited vegetation may have stunted her growth.

They said scat and tracks show there may be two or three other tortoises on the island, raising hopes that Fernanda’s line could continue. She now lives at the Galapagos National Park Tortoise Center, a breeding and rescue facility.

“The finding of one alive specimen gives hope and also opens up new questions, as many mysteries still remain,” Adalgisa Caccone, a research scientists at Yale and an author of the study, said in a statement. “Are there more tortoises on Fernandina that can be brought back into captivity to start a breeding program? How did tortoises colonize Fernandina, and what is their evolutionary relationship to the other giant Galápagos tortoises?”

All 14 species of Galapagos tortoises are listed in the International Union for Conservation of Nature’s Red List of threatened species as either vulnerable, endangered, critically endangered or extinct. Populations were decimated by European explorers who hunted them for food, taking the tortoises aboard their ships, since they could survive with little effort and serve as a source of fresh meat for sailors.