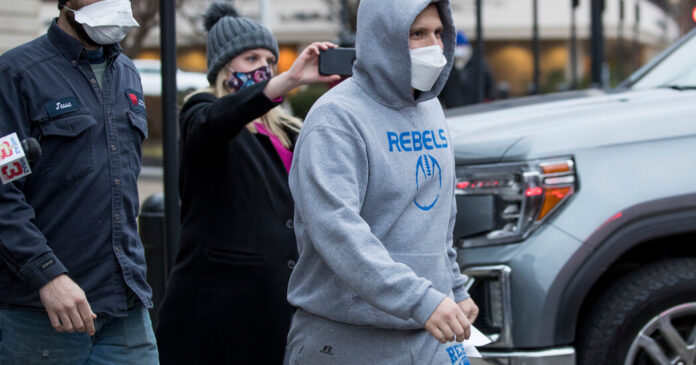 But it’s unlikely you heard much about what happened next.

The ensuing story of these characters in that day’s dark drama is, in many ways, the story of the Republican Party in its awkward not-so-post-Trump phase: a rightward scramble for the former president’s favor, with many viewing their involvement in Jan. 6 as a ticket to greater power, and others as a moment they would rather forget.

More than a quarter of the 21 are seeking either federal or statewide office, and several State House members are running for State Senate seats, an upgrade in political status.

Only two members of the group responded to a request for comment, including one state senator, Mike Azinger of West Virginia. Azinger said in a telephone interview that he was “glad I went,” adding, “I hope President Trump calls us back just to stick it in the eye to the left who are just trying to destroy him and in my opinion, destroy the republic.”

A few have faced legal and professional consequences, but only one has publicly expressed remorse for his actions: Derrick Evans, who was a newly elected delegate to the West Virginia Legislature when he live-streamed his entry to the Capitol.

Evans spent about 10 minutes inside the building, but he was arrested two days later and charged with obstructing a federal proceeding. He immediately expressed “full responsibility for my actions” and resigned his seat. Evans recently signed a plea agreement acknowledging his guilt, but he faces up to five years in prison and a fine of as much as $250,000. A sentencing hearing is scheduled for June 22.

The best-known example of a state lawmaker who has parlayed his involvement in Jan. 6 into electoral success is Doug Mastriano, a state senator in Pennsylvania who is now the Republican nominee for governor. Another oft-covered figure is Mark Finchem, an Arizona state representative and Oath Keepers militia member who is running for secretary of state on a platform of reversing the 2020 results.

Here are three others who have gotten far less attention, but whose rise offers some sobering lessons about the current state of American politics.

Hanks, a member of the Colorado State House who marched with the Ellipse crowd toward the Capitol on Jan. 6, is running for U.S. Senate, hoping to unseat Michael Bennet, the Democratic incumbent. Democrats have mischievously run ads trying to help Hanks in the Republican primary against Joe O’Dea, a construction executive who has taken more moderate positions. The primary will be held on June 28.

Last year, Hanks published a letter describing his experience in Washington on Jan. 6, suggesting that the rioters were antifa “agitators” rather than Trump supporters.

“The last element of hope to rectify the election fraud,” Hanks wrote, “is an intelligence drop of irrefutable information” from foreign intelligence agencies proving “the collusion of foreign and domestic entities to swing the election to Biden.”

In January, during a speech on the floor of the Colorado legislature, Hanks invoked his military experience as he alleged that China was sending “weaponized bio-agents” to the United States and was attacking American democracy by controlling voting machines made by Dominion Voting Systems, an election-equipment company based in Denver.

Hanks has raised just $57,473 for his Senate campaign, according to federal campaign finance reports. But in April, he was the top choice of Republican delegates to the statewide party convention, securing 39 percent of the vote as he muscled several other candidates off the ballot. As he took the stage at the arena in Colorado Springs, Hanks said, “I fully expected Donald Trump to win in 2020” — to roaring applause.

Internal polling commissioned by the O’Dea campaign and shared with The Times shows Hanks trailing by 20 percentage points, with many voters undecided.

Hanks lacks the resources to run television ads. But in a two-minute video promoting his candidacy, he holds a military-style rifle and shoots at what appears to be a photocopier, labeled “Dominion Voting Machine.” As he squeezes the trigger, Hanks says, “As our next senator, I will fight for our conservative values, and I’ll start by targeting our broken election system.”

A self-described “Trump in heels,” Chase has been a volatile force in Virginia politics since winning a State Senate seat in 2015. She has carried a loaded handgun on the chamber floor and led a gun rights rally while holding an AR-15-style rifle. When she declined to wear a mask during a legislative session, citing a medical condition, she was made to sit in a three-sided plexiglass box. After the 2020 election, she called on Trump to reject the results and impose martial law.

Chase spoke at Trump’s Jan. 6 rally on the Ellipse, but says she didn’t march to the Capitol.

Which is not to say she was against what happened: She later praised the rioters as “patriots.” Her colleagues then censured her and removed her from committee assignments.

Vying for the nomination for governor at the state Republican convention in May 2021, she came in third place among seven. In October, at an unofficial rally for Glenn Youngkin, the Republican nominee, she pledged allegiance to a flag that was supposedly at the Capitol that day.

In November, she announced a bid for a congressional seat currently held by Representative Abigail Spanberger, a Democrat, but dropped out when the district boundaries changed. Chase has acknowledged she has her eye on federal office. But for now, she has to contend with a primary for her State Senate seat.

Maddock, a longtime bail bondsman, is a state representative who forms one-half of a pro-Trump power couple in Michigan, along with his wife, Meshawn, who is now a co-chair of the state Republican Party.

Matthew Maddock was into storming capitols before most others. He cheered on the entry of armed protesters to the Michigan State Capitol in April 2020, telling reporters at the time: “I like being around people with guns.” He was also part of a group of Republicans who tried to enter the Michigan Capitol on Dec. 14, 2020, to cast an alternate slate of electoral votes.

Democrats have called for various punishments: censure, stripping his committee assignments, booting him from the Legislature entirely. In April, his fellow Republicans, who control both chambers, ejected him from their caucus without explanation.

Maddock had been running for speaker of the Michigan State House, with Trump’s enthusiastic endorsement, though political strategists in the state said his chances of victory were low.

The Maddocks helped organize buses to Washington for the Jan. 6 protests, though Meshawn Maddock later condemned the violence and said she was back in her hotel room by the time the riot began.

Matthew Maddock seemed to have had an inkling of what was coming. In November 2020, as anger on the right over the election results was boiling over, he warned on a conservative talk show that the outcome could lead to domestic strife.

“They lost faith in the election because there was inadequate elections going on, and the next step was the Civil War,” he said, offering a novel interpretation of the motivations of 19th-century voters. “We’re treading on very, very thin ice.”

The New York Times has reported extensively on the events of Jan. 6. Here’s a short primer on what you should read and watch ahead of tonight’s first public hearing: