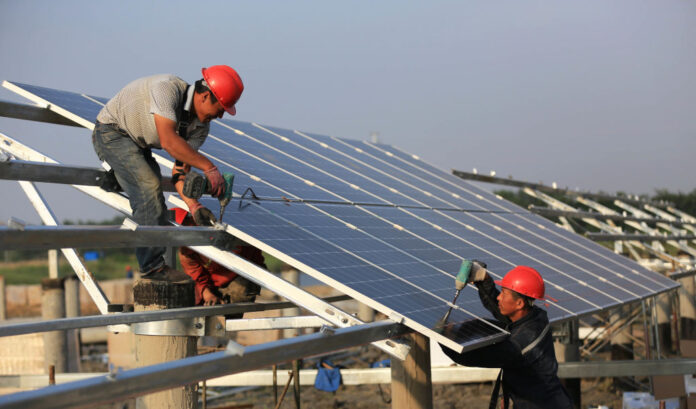 The White House described it as a “bridge” to temporarily permit cheap foreign solar panels to enter the U.S. market while simultaneously supporting the domestic solar manufacturing sector.

Press secretary Karine Jean-Pierre defended the declaration, telling reporters during a news conference that “the emergency is a threat to the availability of sufficient electricity generation capacity to meet expected customer demand.”

But there is a concern that the Biden administration is diminishing the severity of the Commerce Department’s investigation into potential Chinese trade violations.

In March, the U.S. government announced a probe to determine if China had been using solar panel parts companies in Cambodia, Malaysia, Thailand, and Vietnam to circumvent tariffs. Washington had imposed anti-dumping duties to penalize Beijing for subsidizing and installing predatory pricing strategies.

The White House insists that its emergency actions are separate from the present trade investigation.

“I remain committed to upholding our trade laws and ensuring American workers have a chance to compete on a level playing field,” she said in a statement, adding that tariffs would remain in place on solar products produced in China and Taiwan.

“The President’s emergency declaration ensures America’s families have access to reliable and clean electricity while also ensuring we have the ability to hold our trading partners accountable to their commitments.”

About 80 percent of solar panels consumed by U.S. firms are imported from the four overseas markets.

Auxin Solar Inc. CEO Mamun Rashid had initially filed the complaint earlier this year. He slammed the president’s measure, accusing the administration of “open[ing] the door wide for Chinese-funded special interests to defeat the fair application of U.S. trade law.”

But Harrison Rogers, the founder and CEO of HJR Global, a venture capital firm, called it a “bad policy” that will not improve market conditions for the U.S. renewables sector.

“Lifting tariffs on roughly $335 billion in Chinese goods is not an America First strategy,” Rogers told The Epoch Times. “In fact, it’s quite the opposite. It will harm American workers and provide little to no benefit in the effort to fight runaway inflation.”

When they were first introduced under the previous administration, the tariffs were meant to level the playing field with China, says Rogers.

This might be another step in the administration’s quest to reduce former President Donald Trump’s influence on U.S. trade policy, which is what officials have stated is in the process of happening.

Speaking in front of a House Ways and Means Committee hearing on Wednesday, Treasury Secretary Janet Yellen told lawmakers that the White House is attempting to “reconfigure” the Trump-era tariffs applied on approximately $300 billion worth of Chinese goods.

According to Yellen, the administration wants to make these levies more “strategic.”

“This administration inherited a set of 301 tariffs imposed by the Trump administration that I think really weren’t designed to serve our strategic interests,” she told Congress.

Last month, Biden confirmed to reporters during a news conference with Japanese Prime Minister Fumio Kishida that he is weighing cutting tariffs on Chinese goods to ease rampant price inflation.

“I am considering it. We did not impose any of those tariffs. They were imposed by the last administration and they’re under consideration,” Biden said.

Secretary Raimondo told CNN on Sunday that lifting some tariffs on a broad array of products, from household goods to bicycles, “may make sense.”

“We are looking at it. In fact, the president has asked us on his team to analyze that. And so we are in the process of doing that for him and he will have to make that decision,” she told the cable news network.

Although Yellen conceded that Chinese tariffs have added to inflationary pressures, she does not “think tariff policy is a panacea with respect to inflation.”

According to the Peterson Institute for International Economics (PIIE), removing tariffs on imports from China could trim the consumer price index (CPI) by 0.26 percentage points.

If the administration were interested in cutting tariffs to fight inflation, PIIE asserts that officials need to “think more broadly about trade liberalization and consider reducing duties beyond those placed on China.” The group estimates that a 2 percentage point tariff-equivalent decrease on a wide range of goods entering the U.S. market would offer a one-time 1.3 percentage points reduction in CPI inflation.

Labor unions have been pressuring the administration to keep the tariffs intact, writing in an official comment to the Office of the U.S. Trade Representative that doing so would “undermine competitive and national security interests.”

“Our government must act in the national interest to strengthen our economy for the future,” stated Thomas Conway, the president of the United Steel Workers, in a comment filed on behalf of the Labor Advisory Committee for Trade Negotiations and Trade Policy.

“Too many U.S. companies have failed to take needed actions to address the threat posed by CCP [Chinese Communist Party] policies. Many continue to outsource production and research and development, undermining U.S. competitiveness and national security interests.”

The U.S. annual inflation rate for May will be released. Economists are expecting a headline reading of 8.3 percent, unchanged from April.