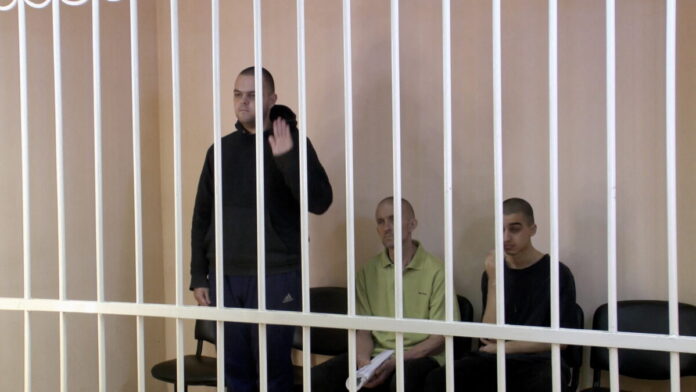 Two British nationals and one Moroccan who were captured by Russian forces in Ukraine were sentenced to death on Thursday, Russian news agencies reported.

British and Ukrainian national Aiden Aslin, 28, British national Shaun Pinner, 48, and Saadoun Brahima, a young Moroccan national, were all sentenced to death after pleading guilty to the charges, according to Russian state news agency RIA Novosti.

RIA Novosti said the three convicted will be shot. It also said the head of the judicial board said that the convicted can appeal their sentences within a month.

The report referred to the three as “mercenaries,” and said they pleaded guilty to actions aimed at seizing power by force on Wednesday. It also said Aslin pleaded guilty to “training in order to carry out terrorist activities.”

According to previous family statements, Aslin and Pinner both moved to Ukraine in 2018 and joined the Ukrainian military long before the recent Russian invasion of the country. They are both married to Ukrainian wives, and Aslin also holds Ukrainian citizenship.

Brahima reportedly studied at the Faculty of Aerodynamic and Space Technologies at the Kyiv Polytechnic Institute before joining the Ukrainian resistance.

The closed-door trial was held at the Supreme Court of the separatist Donetsk People’s Republic.

Following the sentence, British Foreign Secretary Liz Truss said she “utterly condemn[s]” the sentencing of the two Britons, calling it “a sham judgment with absolutely no legitimacy.”

“I utterly condemn the sentencing of Aiden Aslin and Shaun Pinner held by Russian proxies in eastern Ukraine,” the foreign secretary wrote on Twitter.

“They are prisoners of war. This is a sham judgment with absolutely no legitimacy.”

Truss added that her thoughts are with the families, adding, “We continue to do everything we can to support them.”

Decrying what he called a “disgusting Soviet-era style show trial,” Jenrick warned that Russia “cannot treat British citizens like this and get away with it.”

“Contrary to the Kremlin’s propaganda, Aiden Aslin is not a mercenary. He has been living in Ukraine and serving in its armed forces before Russia’s illegal invasion and as a prisoner of war is entitled to protection under the Geneva Convention,” Jenrick wrote.

“The Russian Ambassador should be summoned to the Foreign Office to account for this most egregious breach of the Geneva Convention. Aiden must be released as soon as practicable.”

Aslin, originally from Newark-on-Trent, Nottinghamshire, north England, and Pinner, originally from Bedfordshire, east England, were captured by Russian forces in April after their unit had to surrender after 48 days of defending Mariupol as they were “running out of ammunition.”

They later appeared on Russian state TV, asking British Prime Minister Boris Johnson to help exchange them with Viktor Medvedchuk, a pro-Russian Ukrainian politician who was arrested by the Ukrainian secret services on April 12.