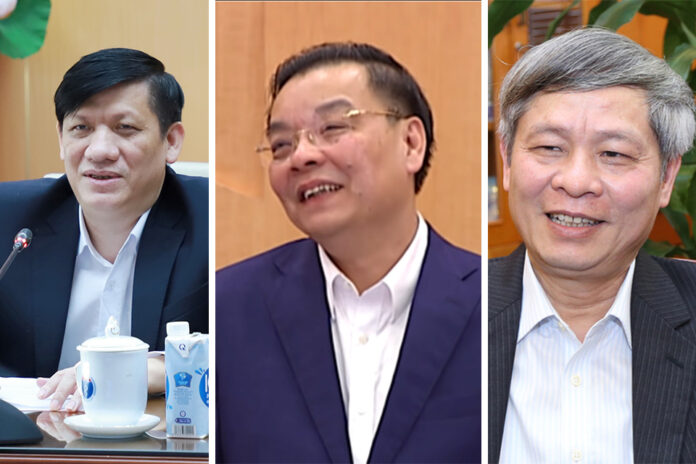 Police at the Ministry of Public Security arrested former Minister of Health Nguyen Thanh Long, former Hanoi Mayor Chu Ngoc Anh and former Deputy Minister of Science and Technology Pham Cong Tac, all of whom were expelled from the Communist Party and removed from their positions Monday.

The three were implicated in a U.S. $172 million scandal in which the Viet A Technologies Company bribed officials to get its test kits made and distributed nationwide at inflated prices.

They are the latest casualties of the one-party state’s years-long crackdown on corruption, referred to as “furnace burning” by its architect, Secretary General Nguyen Phu Trong.

The crackdown, intended to restore public confidence in the Communist Party, has seen several high-profile arrests of government and private sector officials over the past few months. But it has drawn mixed reviews among observers of the government.

Le Hoa, a lawyer based in Hanoi, praised the effort in an interview with RFA’s Vietnamese Service.

“This is a very positive signal giving ordinary people more faith in the Communist Party of Vietnam’s fight against corruption,” he said. “The fight, led by General Secretary Nguyen Phu Trong, is on the right track and is bearing fruit. Those are my thoughts, and I believe many others would have the same view.”

Hoa said that he hoped authorities don’t declare this the end of the Viet A scandal. He said that if police investigate further and bring in even higher ranking party officials, it would show that the party is serious about its tough stance on corruption.

Throwing mud in a pond

Justice is happening too slowly, Pham Dinh Long, a former officer in Vietnam’s military who cancelled his membership in the Communist Party in 2009, told RFA via text message.

“If the law is really strict and transparent and for the sake of justice, they should have been arrested right at the beginning of the Viet A scandal,” said Long, who lives in the central highland province of Lam Dong.

“It’s not only too late, but it is a disregard for justice that these two ringleaders weren’t arrested until this stage,” he said.

He said that a democratic regime that respects for the rule of law would have been quicker to act and that the furnace burning campaign was largely a public relations effort to boost confidence in government and downplayed the campaign’s effectiveness.

“Some praise this anti-corruption furnace, but I despise it. It can’t undo the rottening nature of this country’s system,” he said. “Arresting a thousand guys then replacing them with a thousand of the same kind of guys is just throwing stones, throwing mud to the pond.”

A Hanoi lawyer, who spoke with RFA under condition of annonymity for security reasons, wondered whether the replacements to the three arrested officials would be any better. The lawyer also noted that party leaders, including Nguyen Phu Trong, supported the re-election of Long and Anh to the Central Committee at last year’s 13th Party Congress.

Uncovering corruption can be a tool for those hoping to discredit political rivals, but Vo Van Tao, a journalist from the coastal city of Nha Trang, told RFA that he doubted the arrests were political infighting. He expects further arrests.

“There are a lot of rumors on social media, saying that [Long and Anh] might not be the last catch. Perhaps even higher ranking leaders [could be arrested],” he said.

Vietnam’s agreements to buy Chinese vaccines at a higher price than Pfizer’s during the height of the pandemic last September looked suspicious, he said.

“As you may recall, the first batch consisted of 20 million doses of Pfizer vaccine and each dose cost 127,000 dong [U.S. $5.50]. However, just more than 10 days later, the prime minister agreed to the Ministry of Health’s proposal to import 20 million doses of Chinese Verocell vaccine and the price for each dose was 160,000 dong (around $7). I think something’s abnormal here.”

As part of the same scandal, police in the northwestern province of Son La arrested Lo Van Chien, the head of the Son La General Hospital’s Pharmaceutical Department, for accepting bribes from the Viet A Technologies Company, state media reported.

According to the police investigation, Chien received kickbacks from Viet A when the hospital signed contracts worth 1.05 billion dong (about $45,000) to buy COVID-19 test kits.

Son La General bought each test kit for between 185,000 and 200,000 dong (around $8-9), considerably higher than similar test kits sold for about 140,000 dong ($6) to hospitals and medical facilities in other provinces and Ho Chi Minh City.

The State Audit of Vietnam recently announced that among the 32 provinces and cities it audited, 30 had purchased Viet A’s test kits. Vietnam has 63 provinces and centrally administered cities.

The 30 audited provinces and cities that bought Viet A test kits spent well over 2.1 trillion dong ($91.3 million) in total.

In early January this year, Lt. Gen. To An Xo, the spokesperson of the Ministry of Public Security, said that Viet A Director Phan Quoc Viet had admitted to inflating the price of a COVID-19 test kit by 45% and sending almost 800 billion dong ($35.2 million) in kickbacks to the company’s partners.

Translated by Anna Vu. Written in English by Eugene Whong.