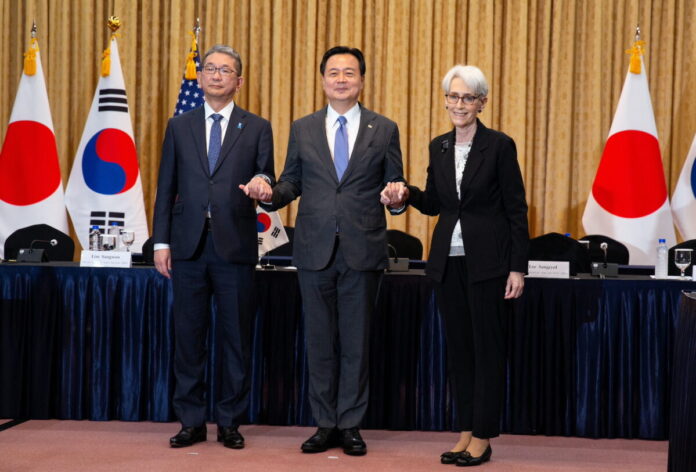 U.S. Deputy Secretary of State Wendy Sherman took part in the three-way meeting with the No. 2 diplomats of South Korea and Japan in Seoul Wednesday, local time.

The trilateral meetings came days after North Korea conducted its latest missile tests and as the authoritarian country appears to prepare for what would be its first nuclear test since 2017.

They urged Pyongyang to abide by international sanctions and immediately cease actions that “escalate tensions or destabilise the region,” a joint statement said.

They also urged the Democratic People’s Republic of Korea (DPRK) to return to negotiations, stressing that “a path to serious and sustained dialogue remains open,” the statement said, referring to North Korea by its official name. They also renewed offers of international assistance to fight against COVID-19.

The three-way meeting of the countries’ No. 2 diplomats was the first of such meetings since South Korea’s President Yoon Suk-yeol took office in May.

It was also the first time a Japanese vice-minister officially visited South Korea since late 2017, amid strained bilateral ties over issues including Japan’s occupation of the Korean peninsula and war-time labor.

In addition to the trilateral meetings, Sherman met with South Korea Prime Minister Han Duck-soo to discuss economic cooperation in the Indo-Pacific and promoting resilient supply chains in semiconductors and other key products, according to State Department spokesperson Ned Price.

They also discussed a joint commitment by the two countries to address “global health security and the COVID-19 pandemic, as well as ensuring our countries are taking concrete steps to meet our commitments to combat climate change.”

Sherman took to Twitter to say she met with South Korean officials and addressed the “denuclearization of the Korean Peninsula” and North Korea’s “unlawful ballistic missile launches and the need for Pyongyang to engage in dialogue.”

Productive meetings with ROK Unification Minister Kwon and Vice Minister Kim about our shared commitment to the complete denuclearization of the Korean Peninsula. We discussed the DPRK’s unlawful ballistic missile launches and the need for Pyongyang to engage in dialogue. pic.twitter.com/53aWosYU5b