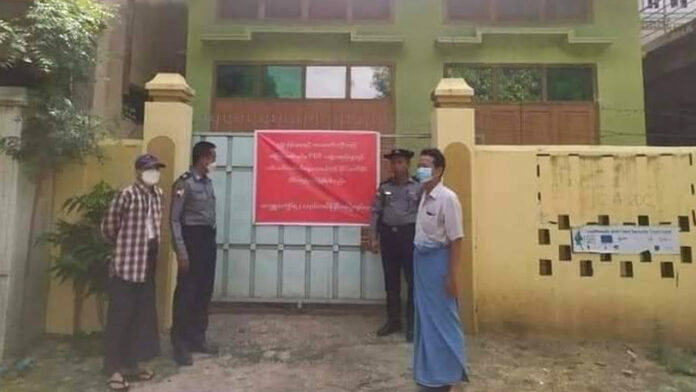 Myanmar’s junta has confiscated nearly 600 homes and other buildings owned by people it claims are members or supporters of the armed resistance, according to a report by independent research group the Institute for Strategy and Policy (ISP Myanmar).

The report found that, between the military’s Feb. 1, 2021, coup and May 20 this year, authorities seized 586 properties, mostly from people who have alleged ties to the shadow National Unity Government (NUG), Pyidaungsu Hluttaw Committee of Representatives (CRPH), and anti-junta People’s Defense Force (PDF) paramilitary group — all of which the regime considers “terrorist organizations.”

Several other confiscated properties belonged to people the military regime said had a role in bombings of junta targets, anti-coup protests, and the nationwide anti-junta Civil Disobedience Movement (CDM).

Among the seizures were the homes of NUG acting President Duwa Lashi La and Prime Minister Mahn Winn Khaing Thann, the report said. The largest number of properties, 159, were confiscated from owners in embattled Sagaing region, where the military has faced some of the strongest resistance to date.

“These confiscations are entirely arbitrary, according to the law,” the former MP, whose home was among those confiscated, told RFA’s Burmese Service.

“The junta is a terrorist organization that has violated all the ethics of how soldiers should act and how civilians should be treated. I know they will never abide by the laws, and I don’t expect anything different.”

According to ISP Myanmar’s findings, 373 properties, or nearly two-thirds of those seized, belonged to civilians. Another 147 properties belonged to lawmakers, while 66 were owned by the NLD or its members.

Kyaw Htet Aung, senior researcher at ISP Myanmar, said the confiscations had taken an emotional, social and economic toll on the victims.

“Especially, the family members and victims of home confiscations have had their lives disrupted and ruined,” he said.

“When someone loses their home, they can live with relatives or shelter at a camp for internally displaced people,” he added. “But often it becomes difficult to maintain one’s regular social, economic, educational and medical activities after a home is lost. Owning a home is central part of one’s life.”

“The military regime is jealous of the NLD party for achieving landslide victories in every free and fair election. They know they cannot achieve a monopoly on power while the NLD is around, and that’s why they are targeting the party,” he said.

“They destroyed the party headquarters, sealed party member’s homes, and arrested the party members. They even arrest and intimidate the family members of NLD members and supporters. They are taking away the rights of the people.”

The junta says voter fraud led to the NLD’s landslide victory in the country’s November 2020 election but has yet to provide evidence for its claims. It has instead violently suppressed nationwide protests calling for a return to civilian rule, killing 1,909 people and arresting 14,046 in the 16 months since, according to the Bangkok-based Assistance Association for Political Prisoners.

Most detainees from the NLD were charged for alleged crimes that carry heavy sentences, including rebellion, corruption, unlawful association and incitement.

The NLD said in January that more than three-quarters of its members arrested by the junta remained in detention more than 11 months after the military seized power. Since the Feb. 1 coup, junta security forces have arrested hundreds of NLD members, including leader Aung San Suu Kyi and former President Win Myint.

Political Analyst Than Soe Naing said the junta is using every means at its disposal to crush the resistance movement and drive away its supporters.

“They intend to make NLD supporters and proponents of the NUG suffer and become homeless,” he said.

“There are no laws or constitutional provisions that support such actions. The junta is now using unprecedented and inhumane tactics to suppress the resistance and its supporters.”