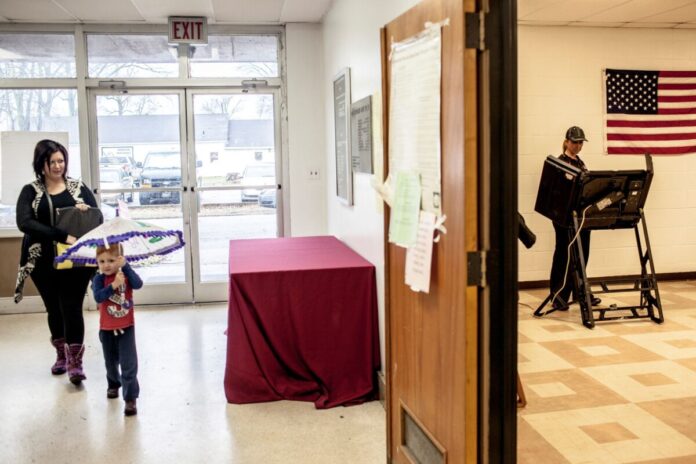 In Arkansas, a solidly red state where pro-life and pro-gun values reign, the Republican primary candidates compete based on how conservative they are or how supportive they are of former President Donald Trump.

Sarah Sanders, former White House press secretary for Trump, holds a firm lead in the gubernatorial Republican primary, with a massive 72.5 percent of likely votes, according to a recent survey conducted by local media Talk Business & Politics and Hendrix College.

Sanders campaigns heavily on her supportive role in the Trump administration, promising to protect conservative Arkansas from the radical agenda pushed by liberal lawmakers in Washington. She obtained Trump’s endorsement shortly after announcing her bid early last year.

So far, Sanders has raised a whopping $12 million for the primary race, dwarfing any other Republican or Democrat gubernatorial candidate, according to financial disclosures published by the Arkansas Secretary of State’s Office.

Hutchinson cannot run again this year because of Arkansas’ two-term limit for governors. About eight other states have a similar gubernatorial term limit.

The second-runner in the Republican gubernatorial primary, Francis Washburn, got 16.5 percent of likely votes based on the survey.

Neither Boozman nor Hill fully supported Trump following the Jan. 6 incident at the Capitol, and Sanders’ endorsing both concerns him, Washburn told several local media.

After the incident, Boozman issued a statement saying that Trump bore some responsibility for the violence. Last May, Hill voted to establish a commission to probe the incident.

Trump, however, has looked past Boozman’s statement and endorsed him for reelection to the U.S. Senate.

On Boozman’s campaign page, Trump’s endorsement is front and center, accompanied by a note describing how Boozman worked with the former president to lower taxes, secure the border, protect the second amendment, and protect life.

According to the latest Federal Election Commission data, Boozman has raised more than $4 million for his reelection bid. He is followed by Jake Bequette, who raised about $1 million, and Jan Morgan, who has raised about $554,000.

Bequette, a former NFL player and Army officer, positions himself as more conservative than Boozman. This is the first time that Bequette is running for an elected office.

Uihlein owns Wisconsin-based Uline, a shipping and business supplies company. He has a record of supporting ultra-conservative candidates that run against established Republicans.

Jan Morgan, a gun rights advocate and investigative journalist, runs on a platform of protecting second amendment rights. She has also criticized Boozman for not challenging the 2020 election results as a U.S. senator. According to an official statement, Boozman decided to accept the 2020 outcome because doing otherwise is unconstitutional.

According to a May survey conducted by Talk Business & Politics and Hendrix College, Boozman leads the Republican primary pack for the Senate with 45 percent of likely votes, followed by Bequette, at 19 percent, and Jan Morgan, at 16.5 percent.

If Boozman fails to capture the majority on primary election day, May 24, he must face a runoff election against the runner-up on June 21.

For the four congressional seats in Arkansas, incumbent Republicans have far outraised and outspent compared to their Republican challengers.

In the Democratic primaries, Chris Jones has 59.5 percent of likely votes for his gubernatorial bid.