Anti-Americanism in Pakistan – The Diplomat 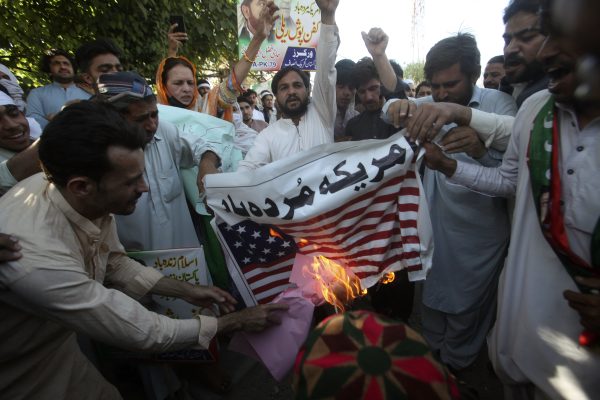 The most challenging problem the United States faces in executing its foreign policy goals in Pakistan is anti-Americanism. The ouster of former Prime Minister Imran Khan following a vote of no confidence reinvigorates this perennial challenge.

Khan is rallying his supporters over a new slogan, “Imported Government Na Manzoor” (translation: rejected), after alleging that the United States spearheaded a conspiracy to remove him from office. His accusation of regime change has been refuted by Pakistan’s National Security Committee (NSC), the country’s highest bipartisan civil-military forum. The NSC stated that a U.S. official’s “undiplomatic language” at a lunch amounted to “blatant interference” but concluded that “there has been no conspiracy.”

Yet, in an era where alternative facts are as good as true, this does not matter to Imran Khan or his supporters. His narrative is merely a symptom and not a cause of anti-Americanism in Pakistan. There may be a temptation to dismiss conspiracy claims as resurgences of repeated tropes in Pakistani politics. However, this avoids confronting why Khan can effortlessly tap into anti-American sentiments and dynamics that in turn impact Pakistani politics and its foreign policy.

The United States and Pakistan have well-known laundry lists of foreign policy grievances. When Pakistan airs these grievances, Washington’s establishment often dismisses them as “familiar tropes.” Whether or not Washington wants to believe these grievances are legitimate, its passivity increases anti-American sentiment in Pakistan. This, in turn, makes it increasingly difficult for the U.S. to achieve its foreign policy objectives. While the relationship has been historically predicated on security asks, moving toward non-traditional security collaboration may be the only structural approach to mitigate anti-Americanism in Pakistan.

Anti-Americanism is not exclusive to Pakistan but takes a unique form in the country. Radical anti-Americanism, anti-capitalism, and poor people-to-people relations are not the major factors.

Radical anti-Americanism has erupted in minuscule pockets in Pakistan but remains an anomaly in the 75-year relationship. There is also no mainstream fiscal ideological debate in Pakistan, which keeps Islamabad tied to the Washington Consensus. While new leftist parties have added invaluable dimensions to socioeconomic debate, they still have a long way to go before uprooting centrist groupthink and historic economic alignments.

Instead, liberal and sovereign-nationalist critiques remain salient because of the United States’ securitized engagement with Pakistan and its foreign policy goals. Liberal anti-Americanism critiques relate to Washington upholding values for domestic audiences but dismissing them abroad. Sovereign-nationalist critiques concern the impingement of sovereignty – both directly, such as military intervention, and indirectly, through coercive diplomacy.

Imran Khan is the latest in a long line of politicians to exploit anti-Americanism for political survival. WikiLeaks revealed that Pakistan’s civilian leadership (some of whom are now back in office) privately supported U.S. drone strikes in Pakistan (2008-2018) but lied about their stance publicly. This created an impression that the United States was playing a double game in Pakistan. In addition to fueling the fire, Khan has added another dimension to the phenomenon. During the initial no-confidence vote, the deputy speaker of Parliament, a Khan loyalist, justified dismissing the vote by declaring all opposition members disloyal under Article 6 of the constitution for allegedly working with the United States.

The term “traitor” has provided unending currency in Pakistan. While military officials seem to remain immune, when applied to critical politicians, journalists, and civilians, the “diagnosis” is a cue to begin “self-treatment” through self-censorship. Not doing so can have severe consequences. Today, advocates for maintaining or improving Pakistan-U.S. relations represent a collective group at risk of being sent to “Traitorville,” whose proverbial boundaries expand as Khan’s false narrative gathers steam. This is hampering a meaningful debate in Pakistan about its relationship with all superpowers. Washington’s relative non-engagement with Pakistan’s civilian government and society has not helped either.

Pakistan and the United States have a state-to-state relationship predicated on two primary issues: war and terrorism. In that context, the United States has directly engaged with the military and not civilian governments to achieve its security objectives. This has undermined Pakistan’s post-colonial democratic institutionalization and represents a structural faultline in the relationship.

The United States has taken advantage of indigenous military coups by perpetuating dictatorships that have lasted almost half of Pakistan’s political life. None of the four U.S.-supported dictators would have survived for as long as they did without the United States’ backing. Washington’s modus operandi has not changed following Pakistan’s transition to procedural democracy in 2008.

The Pakistan Army’s top brass has been the primary benefactor in this equation, receiving military hardware, technology, and economic support in return for counterterrorism operations and helping fight two wars in Afghanistan. These were wars which the Pakistani people had nothing to do with. Recognizing this nuance is critical for Washington to achieve its foreign policy goals in Pakistan, even if the will to do so remains elusive.

Over 220 million Pakistanis, of whom two-thirds are under 30, have lived through the most vociferous waves of anti-Americanism, sparked by the Pressler sanctions (1990-2001) and the War on Terror (2001-?). Pakistanis have had to reconcile Washington’s military-centric engagement with their changed lives. It is unfortunate that Pakistan’s ongoing sacrifices in the War on Terror – 80,000 killed on the street, at weddings, in their houses, in school, at checkpoints, on their way to work, and in places of worship, not to mention economic losses – fall on deaf ears in Washington. By choosing to fixate on the United States’ engagement with the military’s top brass, Washington overlooks the consequences of its approach to Pakistanis’ lived experience. This active choice increases anti-Americanism in Pakistan.

I grew up during the War on Terror. Like many Pakistanis, I heard Washington’s calls for Pakistan to “do more” to fight terrorism. This was puzzling to me as a student since most Pakistanis I know were directly or indirectly impacted by terrorism. In just one of many examples, after the school massacre in Peshawar in 2014 – when the Pakistani Taliban killed 132 students and 17 staff members – the government permanently increased security measures across educational institutions, which inadvertently made kindergartens, schools, and colleges a vessel for policing and fear.

My schoolmates and I were rigorously searched as we entered our newly erected, prison-length school walls topped with layers of barbed wire. Instead of going to class, we rendezvoused at the school ground for daily morning terror prevention drills. Watching four government-mandated snipers slowly patrolling roof corners as we completed the drill, I thought I had a clear idea of who the enemy was – as I imagine the snipers did too. But when told we weren’t doing enough against terrorism, I began questioning who the enemy might be.

Washington’s “do more” ask may have been geared toward Rawalpindi and not even related to the Pakistani Taliban. Still, the public drumming at every seeming opportunity felt like a ploy to humiliate Pakistanis for something they had no control over – and indeed suffered from daily. I felt that empathy was lacking.

Imran Khan taps into some of these dynamics as he galvanizes his supporters on trumped-up charges of regime change. On the one hand, he functionalizes simmering sentiments stemming from a lack of historical reckoning. On the other hand, his narrative successfully distracts voters from domestic structural fault lines and veils the factor of his questionable decision-making as a cause for his ousting.

Pakistani anti-Americanism structurally stems from a military-first, people-second engagement approach. However, this prism remains less relevant for the future. The United States has placed India’s strategic interests above Pakistan’s because of a newfound common adversary. Washington ignored Pakistan’s decade-long cautionary advice on Afghanistan, which is now home to the worst humanitarian crisis in the world. There is a real chance that the United States will see Pakistan through red-tinted glasses as it gears up for great power competition with China.

Instead of fighting these changing dynamics and Pakistan’s changed geostrategic alignments, the Pakistan-U.S. relationship should move away from military-centrism and instead focus on new opportunities to tackle non-traditional security threats, such as climate change and geoeconomics. The COVID-19 pandemic may have also provided a litmus test for this thesis. As of April 28, 2022, the United States had donated the most vaccines to Pakistan through its global distribution program. It is bemusing how few Pakistanis know about this. There is no replacement for on-ground engagement in civil society and public diplomacy. Other countries have demonstrated the benefits of direct engagement after stepping outside embassy walls or hushed military conference rooms.

Moving from traditional security to non-traditional security collaboration will also make it more conducive for the United States to meaningfully work with democratic governments instead of direct engagement with the military. It would reflect at least a surface-level appearance that the United States still considers democracy in Pakistan as something worth enabling rather than undermining. Doing so will create space for civilian leaders—who have mics and pulpits that military officials do not—to debate Pakistan’s relationship with all superpowers.

Upholding the business-as-normal approach will not only perpetuate anti-Americanism but could give rise to different forms of the phenomenon not substantively seen in Pakistan to date, with dangerous downstream consequences. Engaging with Pakistan’s democratic institutions, changing prisms of cooperation, and reckoning with Pakistanis’ fundamentally altered lived experience after the War on Terror represent perhaps the only opportunities to mitigate anti-Americanism in Pakistan.