UK to Provide Ukraine With £1.3 Billion in Further Military Support 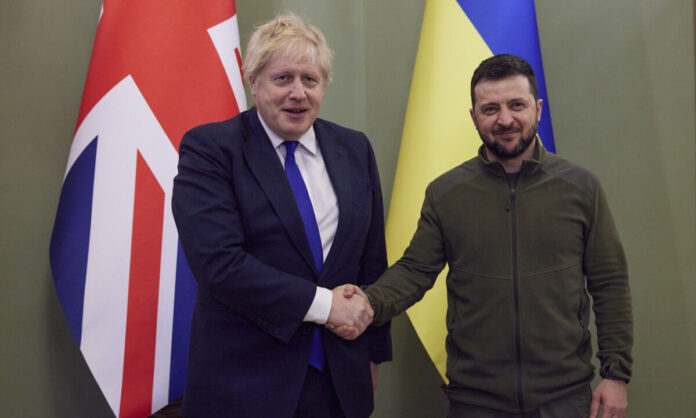 The UK government has pledged £1.3 billion ($1.6 billion) worth of further military support to Ukraine to sustain the country’s continuing resistance to the Russian invasion.

In a statement, Johnson said the “brutal attack” launched by Russian President Vladimir Putin on Feb. 24 is “not only causing untold devastation in Ukraine,” but also “threatening peace and security across Europe.”

He noted that the UK was “the first country to recognise the scale of the threat and send arms to help the Ukrainians defend themselves.”

“We will stand by that endeavour, working with our allies to ensure Ukraine can continue to push back the Russian invasion, and survive as a free and democratic country,” he said.

“In the process, we are bolstering our own security and economy, turbocharging the development and production of cutting-edge defence equipment here in the UK,” he added.

Johnson will host a meeting of arms companies later this month to discuss increasing production in response to the extra demand for weapons caused by the conflict in Ukraine.

The funding comes on top of earlier commitments worth about £1.5 billion ($1.8 billion), which included some £400 million ($494 million) in humanitarian aid and loan guarantees for £700 million ($864 million) in additional World Bank lending.

Rishi Sunak, the chancellor of the exchequer, said: “We are unwavering in our support for the people of Ukraine and this extra £1.3 billion will ensure we continue to provide the necessary military and operational support they need to defend themselves against Putin.

“The UK is at the forefront providing economic, humanitarian, and defensive support to Ukraine and we are working tirelessly to bring an end to this conflict.”

Meanwhile, the UK Ministry of Defence (MoD) said that Russia’s ability to fight with modern equipment was being damaged by losses in Ukraine and the impact of sanctions.

In its intelligence update on May 7, the MoD said: “The conflict in Ukraine is taking a heavy toll on some of Russia’s most capable units and most advanced capabilities. It will take considerable time and expense for Russia to reconstitute its armed forces following this conflict.

“It will be particularly challenging to replace modernised and advanced equipment due to sanctions restricting Russia’s access to critical microelectronic components.”