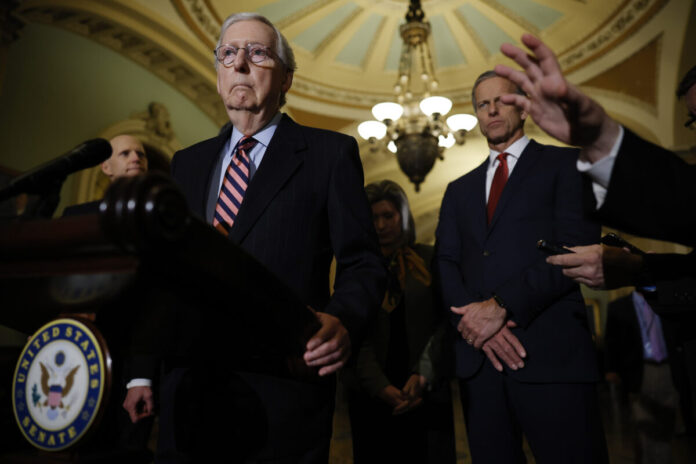 Senate Minority Leader Mitch McConnell (R-Ky.) said that a nationwide ban on abortion is a possibility if the Supreme Court overturns Roe v. Wade, as was suggested after a draft opinion that signaled the high court would rule against the landmark 1973 decision.

“If the leaked opinion became the final opinion, legislative bodies—not only at the state level but at the federal level—certainly could legislate in that area,” ​the Kentucky Republican said in a recent interview.

“And if this were the final decision, that was the point that it should be resolved one way or another in the legislative process. So yeah, it’s possible,” ​McConnell told USA Today Saturday when asked if a nationwide abortion ban is worthy of debate.

His remark comes days after a draft opinion authored by Justice Samuel Alito was leaked to Politico suggesting that Roe v. Wade, which argued that a woman has a constitutional right to obtain an abortion, would be overturned sometime this year. Alito argued that the court’s arguments in coming up with the Roe v. Wade decision were flawed, and he stressed that states should decide on whether to restrict abortions.

Following the draft leak, Supreme Court Chief Justice John Roberts said he called an investigation to determine how the document was leaked to the press, later telling a conference of judges and lawyers that such a move was “absolutely appalling.” Roberts and Justice Clarence Thomas both suggested that they believe the leak was an attempt to pressure the Supreme Court to render a decision in a certain way and said the institution will not be coerced.

Many of McConnell’s colleagues, meanwhile, have criticized the unprecedented leak itself. Democrats and left-wing activists have called on their supporters to vote for politicians who will support abortion laws, while protesters and agitators were seen outside the Washington, D.C.-area homes of several of the justices on Saturday and Sunday.

On May 3, Senate Majority Leader Chuck Schumer (D-N.Y.) announced he would force a vote to codify Roe v. Wade, although it’s nearly guaranteed to fall short of the 60 votes needed to advance in the upper chamber.

“A vote on this legislation is not an abstract exercise. This is as urgent and real as it gets. We’ll vote to protect a women’s right to choose,” Schumer said in a likely preview of Democrats’ rhetoric ahead of the 2022 midterm elections.