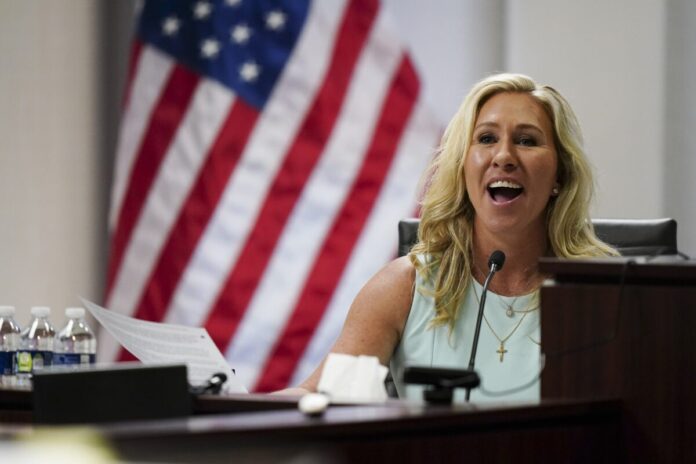 Rep. Marjorie Taylor Greene (R-Ga.) is qualified to be a candidate for U.S. Congress and will remain on the ballot for the upcoming election, Georgia’s top election official said on May 6.

“In this case, challengers assert that Representative Greene’s political statements and actions disqualify her from office,” Raffensperger said. “That is rightfully a question for the voters of Georgia’s 14th Congressional District. Therefore, Administrative Law Judge Charles R. Beaudrot’s Initial Decision, Findings of Fact, and Conclusion of Law are hereby AFFIRMED.”

The case was filed by a group led by left-wing activists, which argued that Greene helped facilitate the Jan. 6, 2021, breach of the U.S. Capitol.

“Specifically, the evidence shows that she either helped to plan the attack on January 6, or alternatively helped to plan the pre-attack demonstration and/or march on the Capitol with knowledge that it was substantially likely to lead to the attack, and otherwise voluntarily aided the insurrection,” Free Speech For People, the group, said in filing the case.

But Beaudrot said the group offered “no persuasive evidence” backing their claims, adding that there is also no evidence that Greene—a member of Congress in the Capitol already when it was breached—participated in the breach.

“Challengers make a valiant effort to support inferences that Rep. Greene was an insurrectionist, but the evidence is lacking, and the court is not persuaded,” the ruling stated.

In his 2-page decision, Raffensperger said Greene is qualified to be a candidate for office.

The decision came just weeks before voters head to the polls to cast votes in the primaries, with the general election scheduled for November.

Greene won office for the first time in 2020 with 75 percent of the vote.

In a message to voters after Beaudrot’s ruling, Greene said that “Democrats have seen how hard I fight for America First values with Republicans in the minority, so they are absolutely terrified to see me with the power of the majority.”

“That’s why a [George] Soros-style dark money group launched an unprecedented attack on free speech, on our elections, and on you, the voter,” she added.

Free Speech For People decried the rejection of its challenge, claiming it “gives a pass to political violence as a tool for disrupting and overturning free and fair elections.” The group said it would appeal.