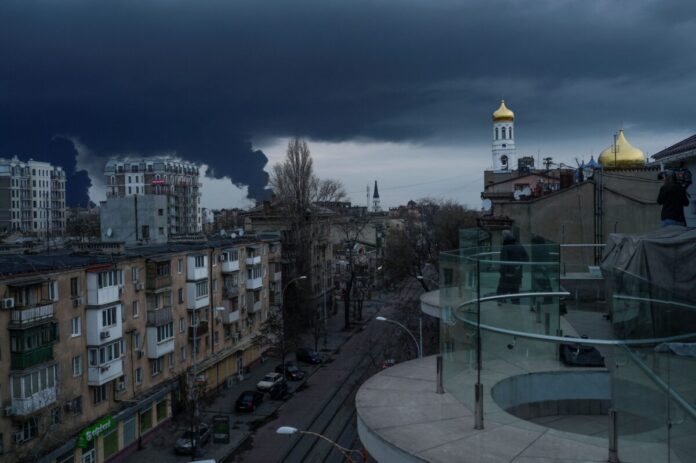 The latest on the Russia–Ukraine crisis, May 7. Click here for updates from May 6.

Bratchuk said the strikes hit the city after targets in the surrounding Odesa region had been hit by four missiles earlier in the day.

He did not give further detail about the new strikes, saying that the facts were still being established.

Reuters was not able to immediately confirm details of the report.

Pro-Russian forces said 50 more people were evacuated on Saturday from the besieged Azovstal steelworks in Mariupol, where scores of civilians have been trapped for weeks alongside Ukrainian fighters holed up in the Soviet-era plant.

The territorial defence headquarters of the self-declared Donetsk People’s Republic (DPR) said on Telegram that a total of 176 civilians had now been evacuated from the steelworks.

Reuters could not immediately verify the report.

About 50 civilians had been moved on Friday from the sprawling, bombed-out plant to a reception center in nearby Bezimenne, in the separatist DPR, whose forces are fighting alongside Russian troops to expand their control of large parts of eastern Ukraine. Dozens of civilians were also evacuated last weekend.

Russia’s most senior lawmaker on Saturday accused Washington of coordinating military operations in Ukraine, which he said amounted to direct U.S. involvement in military action against Russia.

Washington and European members of the transatlantic NATO alliance have supplied Kyiv with heavy weapons to help it resist a Russian offensive that has resulted in the occupation of parts of eastern and southern Ukraine but failed to take Kyiv.

However, the United States and its NATO allies have repeatedly said they will not take part in fighting themselves, in order to avoid becoming parties to the conflict.

U.S. officials have said the United States has provided intelligence to Ukraine to help counter the Russian assault, but have denied that this intelligence includes precise targeting data.

A Fiji court has ruled that the $300 million yacht allegedly owned by Russian oligarch Suleiman Kerimov and seized by the United States must remain in Fiji for now.

The Fiji Court of Appeal has ruled that the luxury yacht Amadea can not be moved out of the South Pacific island nation until an appeal against the seizure is heard, defense lawyer Feizal Haniff, who is acting for the Amadea’s registered owner Millemarin Investment Ltd, confirmed in an email.

The U.S. embassy in Suva did not immediately respond to a request for comment on the latest court ruling.

A Fiji court had ruled that the United States could seize the Russian-owned superyacht, weeks after it arrived and it was seized by the local police and FBI agents on Thursday.

Authorities in various countries have seized luxury vessels and villas owned by Russian billionaires in response to sanctions imposed on Russia over its invasion of Ukraine, which the Kremlin calls a special military operation.

Biden: US Sending Another $150 Million in Assistance

President Joe Biden on Friday authorized the shipment of another $150 million in military assistance to Ukraine for artillery rounds and radar systems in its fight against Russia’s invading forces.

Biden said the latest spending means his administration has “nearly exhausted” what Congress authorized for Ukraine in March and called on lawmakers to swiftly approve a more than $33 billion spending package that will last through the end of September.

“We are sending the weapons and equipment that Congress has authorized directly to the front lines of freedom in Ukraine,” Biden said in a statement. “U.S. support, together with the contributions of our Allies and partners, has been critical in helping Ukraine win the battle of Kyiv and hinder Putin’s war aims in Ukraine.”

In a statement, the Russian Interdepartmental Humanitarian Response Center says the 50 civilians include 11 children.

Ukraine’s deputy prime minister, Iryna Vereshchuk, also said 50 civilians left the plant without giving a breakdown of how many were children.

Both Vereshchuk and the Russian body said the evacuation of civilians from Azovstal will continue Saturday.

Ukrainian fighters holed up at the sprawling complex are making their last stand to prevent Moscow’s complete takeover of the strategic port city.