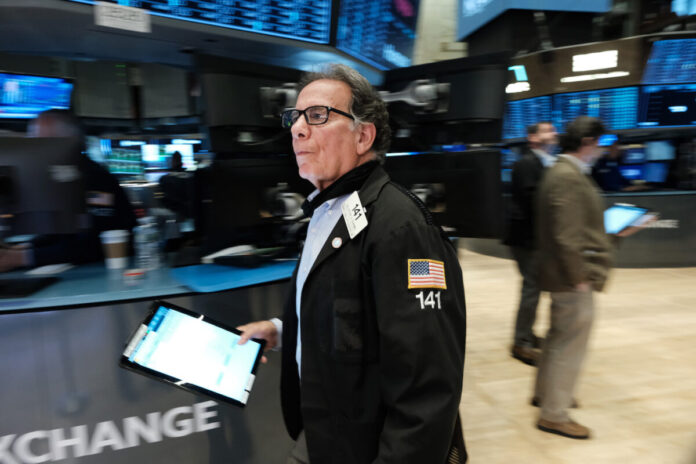 Sentiment among Wall Street investors weakened in April, following a slump bump in February and March, according to a new Goldman Sachs poll.

Investors are also worried about a recession, the survey revealed. Two-thirds of investors anticipated a recession before the end of 2023, up from 56 percent in April. They believe that an economic downturn is necessary to help inflation normalize.

The one sector that institutional investors are most bearish in is tech. Sixty-two percent think the industry could tumble by another 10 percent.

This week, the tech-heavy Nasdaq Composite Index slipped into a bear market, plunging about 22 year-to-date.

So far this year, the Dow Jones Industrial Average has slumped 9 percent, and the S&P 500 has tumbled nearly 13 percent.

Still, there is some suggestion that a market could transition into a rally because of investor positioning, notes Oscar Ostlund, head of content for Marquee, the digital platform for the Global Markets Division.

A separate investment sentiment reading from the American Association of Individual Investors (AAII) found that 53 percent of respondents think the market is heading in a bearish direction during the next six months.

The survey conducted before this week’s Federal Open Market Committee (FOMC) policy meeting also learned that 54 percent believe other investors are too bearish. But many are still concerned about a recession, driven by inflation and the military conflict in Eastern Europe.

Moreover, an Allianz Life Insurance Company first-quarter market perceptions poll reported that more than half (56 percent) of participants are fearful of a market crash.

“People don’t like uncertainty when it comes to finances and that is exactly what we have experienced in the markets thus far in 2022,” said Kelly LaVigne, VP of Consumer Insights, Allianz Lifem, in a news release.

“Unfortunately, we’re seeing that the vast majority of Americans expect volatility to stick around this year and it is adding yet another layer of risk to manage within their financial portfolios.”

Investors worldwide are worried about the stock market and the global economy, according to a new quarterly Investor Sentiment survey from UBS, the world’s leading global wealth manager.

In the United States, short-term investor optimism is quite strong, rising to 58 percent. However, only 33 percent plan to invest in the next six months, with the war in Ukraine and inflation as their chief concerns.

“Investors globally are clearly concerned about the personal and economic impacts of one of the largest humanitarian crises in decades,” said Iqbal Khan, president of UBS Europe, Middle East, and Africa and co-president of UBS Global Wealth Management, in the report.

“The long-term economic implications of the war in Ukraine are difficult to assess, but most investors remain optimistic on their outlook for the stock market and are confident in their well-diversified investment portfolio.”

Earnings season has also been a disappointment, notes Ken Mahoney, the CEO and president of Mahoney Asset Management.

“When we come into earnings season limping, we sometimes see companies’ earnings as a potential catalyst to move higher if they beat expectations and raise guidance, but this has not been the case so far,” Mahoney told The Epoch Times, pointing to Amazon as a good example of this.

Year-to-date, Amazon shares are down more than 30 percent.

In a recent outlook for global markets, Capital Economics projected additional pain amid the rise in global government bond yields.

“We think the rises in global government bond yields—and falls in equity prices— have not run their course yet,” the report stated.

“Yields have typically peaked only shortly before the ends of central bank tightening cycles and we doubt this one will be different. We expect this, as well as the threat of slowing growth, to keep risky assets, such as equities and corporate bonds, under pressure until around the middle of next year.”

However, “financial markets could eventually bottom out once the monetary tightening cycles reach their conclusions,” Capital Economics purported.

The U.S. Treasury market has surged this year, with the benchmark 10-year yield topping 3.1 percent on Friday.

Waning market optimism is understandable when inflation surges, growth slows down, and interest rates climb higher across the globe, says Brunello Rosa, the CEO and head of research at Rosa & Roubini, a consultancy firm.

“Now it’s time for a reappreciation of the economic fundamentals around the world in terms of growth,” he told CNBC on Friday.

“It’s clear that all of them [central banks] are talking tough at this stage. But the reality is that lots of tightening will eventually lead to economic contraction. In the eurozone and in the U.S. they are nowhere near realizing that actually there will be some form of contraction of economic activity.”

Market expectations for stagflation or recession have accelerated in recent weeks amid the first-quarter economic contraction of 1.4 percent and mixed economic data.

Stagflation is when the economy stagnates, inflation soars, and joblessness grows. A technical recession is two consecutive quarters of negative GDP growth.

But there is debate if the Federal Reserve can achieve a soft landing—facilitate economic growth, curb inflation, and maintain low unemployment—in the economy as the institution raises interest rates and trims the $9 trillion balance sheet.

“The degree to which the economy can digest higher interest rates without falling into a recession will be bourn in the economic data over the coming months,” Morning Consult said in a report last month.

“The extent to which growth in hiring, investment and spending among other indicators slow will reveal how well the Federal Reserve has managed to engineer a soft landing.”

Early forecasts suggest that the economy could rebound in the second quarter.

ING expects annualized growth of between 2 percent and 2.5 percent. The Atlanta Fed Bank’s GDPNow model shows a 2.2 percent expansion in the April-to-July period.