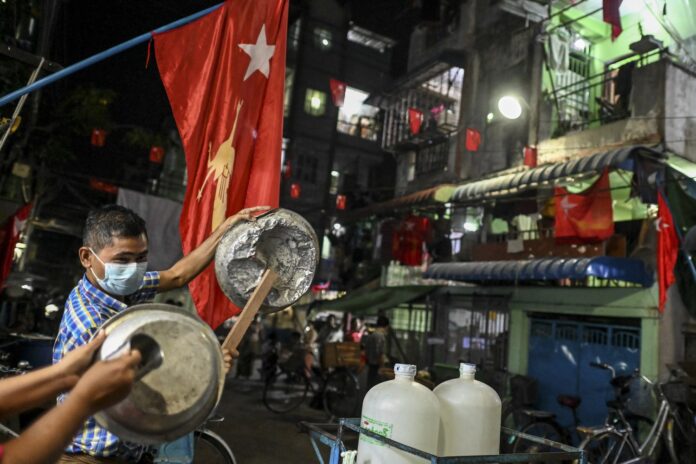 An announced plan to auction off the homes of anti-coup activists is the military regime’s bid for revenge after Myanmar’s shadow government began selling shares of assets appropriated by Snr. Gen. Min Aung Hlaing and other junta officials, according to analysts.

On April 27, junta deputy information minister, Maj. Gen. Zaw Min Tun, told reporters at a press conference in the capital Naypyidaw that the sealed-off homes of detained activists had been “presented to the court” and would be sold at auction sometime in the future.

When asked for clarification on Thursday, Zaw Min Tun told RFA’s Myanmar Service that the junta had obtained court permission to proceed with the sales.

“You must present evidence according to court procedure,” he said. “Once the court has ruled on the evidence, there are certain procedures to follow. Right now, we have presented the evidence as needed.”

The deputy minister provided no other details on the homes in question, including who they had belonged to or what the former owners are being charged with.

Last week’s announcement came six days after National Unity Government (NUG) Minister for Finance and Investment Tin Tun Naing told RFA of plans to sell a number of properties he said were identified by the shadow government as having been illegally occupied by senior junta officials when the military seized power in a Feb. 1, 2021, coup.

Among the properties is the former guesthouse of Myanmar’s military and accompanying two-acre plot of land at No. 14 Inya Road in Yangon, which now serves as Min Aung Hlaing’s home. Tin Tun Naing said the NUG plans to sell the estate for U.S. $10 million — about one-third of the property’s current value — in 100,000 shares of U.S. $100 each.

On Thursday, Tin Tun Naing provided additional details of the sale, which he said involves 100,000 shares of the estate priced at U.S. $100 apiece.

“Once we identified it as state property, we started to sell it to facilitate the end of the dictatorship and to raise funds needed for the success of the Spring Revolution, in the interest of the people,” Tin Tun Naing said.

“As soon as it was announced that it would go on sale, there were several purchases. One single person has already bought shares worth U.S. $100,000.”

The NUG’s Ministry of Finance and Investment said the sale will involve around 400 acres of land occupied by junta officials in Yangon, Mandalay, and Naypyidaw, which will be “confiscated and made available to the public in May on a pre-purchase basis.” The sale assumes that the NUG will claim control of the country from the junta, at which point it would deliver on the promised asset.

Proceeds from the sale will be donated to the opposition movement and used to compensate victims of junta arrest and torture, rehabilitate members of the Civil Disobedience Movement who left state jobs in protest of the coup, and assist people whose homes have been burned in arson attacks by junta forces, the ministry said.

The NUG said that its plan to seize junta assets “is to discourage likely dictators who want to abuse power from illegally taking over state-owned land and properties in the future.”

‘No legal right to confiscate’

Lawyers and political analysts told RFA that while the sale of the former military guesthouse involved returning public property to the people, the military has no legal right to confiscate and sell private assets.

A spokesman for the Thailand-based Assistance Association for Political Prisoners (AAPP) called the junta’s announcement a form of “retaliation” against democracy and human rights activists, adding that many of the homes belong to people whose trials have not been ruled on by the courts.

“The law does not allow for the confiscation of properties of innocent people,” they said, speaking on condition of anonymity.

“Some of the houses they sealed off were not even owned by the person they arrested. Now we are seeing family-owned properties being confiscated too. It’s a form of revenge.”

High Court lawyer Kyee Myint, who assists with human rights cases, told RFA that the junta plan to sell private property is in violation of the law.

“I am very pleased that the NUG has said it will auction off the former military guesthouse on Inya Road, now taken over by Min Aung Hlaing. But how can it be legal for them to retaliate against us,” he asked.

“They are robbers. The courts are now under their control. The chief justice is a military officer. The judiciary in our country has been destroyed for a long time. It is a violation of the law to seize properties of ordinary politicians.”

Well-known singer Chan Chan, who has a warrant out for her arrest on charges of incitement, said in a May 1 post to her Facebook page that she heard the junta is preparing to sell her house in the port city of Thanlyin near Yangon and urged fans to protest.

Other properties seized by the junta are owned by artists, anti-junta activists, members of the deposed National League for Democracy and paramilitaries with the prodemocracy People’s Defense Force.

On May 3, authorities sealed off the family home of Myint Zaw Oo, an NLD member of Parliament in Sagaing region’s Kanbalu township.

“They have no rules or laws. They just act blindly,” he said.

“They think we may be demoralized if they do these things. It is seen as a kind of psychological warfare. But we have already thought of the consequences of our actions, so it doesn’t matter whether they seize our property or even burn it.”

According to the AAPP, authorities have killed 1,825 civilians and arrested some 10,545 since February last year, mostly during peaceful anti-junta protests. The group said the junta has confiscated more than 570 homes and buildings since the coup.