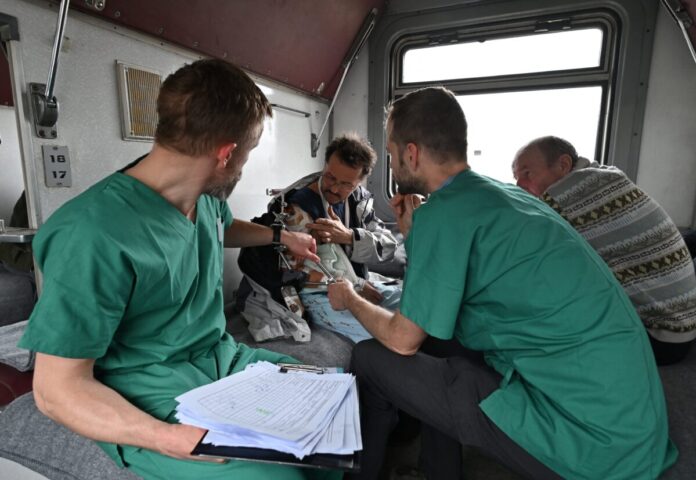 The latest on the Russia–Ukraine crisis, May 6. Click here for updates from May 5.

Russia‘s invasion of Ukraine has devastated hundreds of hospitals and other medical institutions and left doctors without drugs to tackle cancer or the ability to perform surgery, President Volodymyr Zelenskyy said.

Zelenskiy said many places lacked even basic antibiotics in eastern and southern Ukraine, the main battlefields.

“If you consider just medical infrastructure, as of today Russian troops have destroyed or damaged nearly 400 healthcare institutions: hospitals, maternity wards, outpatient clinics,” Zelenskyy said in a video address to a medical charity group on Thursday.

In areas occupied by Russian forces the situation was catastrophic, he said.

“This amounts to a complete lack of medication for cancer patients. It means extreme difficulties or a complete lack of insulin for diabetes. It is impossible to carry out surgery. It even means, quite simply, a lack of antibiotics.”

In one of the most widely denounced acts of the war, a maternity hospital was all but destroyed on March 9 in the besieged port city of Mariupol. Russia alleged pictures of the attack were staged and said the site had been used by armed Ukrainian groups.

The Kremlin says it targets only military or strategic sites and does not target civilians. Ukraine daily reports civilian casualties from Russian shelling and fighting, and accuses Russia of war crimes. Russia denies the allegations.

The Pentagon says the majority of Russian forces that had been around the port city of Mariupol have left and headed north, leaving roughly the equivalent of two battalion tactical groups there, or about 2,000 troops.

Pentagon spokesman John Kirby said Thursday that even as Russian airstrikes continue to bombard Mariupol, Moscow’s forces are still making only “plodding” and incremental progress as the main fight presses on in the eastern Donbas region.

He said he has seen no change in Russian behavior or momentum as May 9 draws near.

Russia celebrates Victory Day on May 9, the anniversary of the Soviet Union’s defeat of Nazi Germany in World War II. There have been suggestions that Russian President Vladimir Putin wants to tout a major victory in Ukraine when he makes his address during the traditional military parade on Red Square.

Kirby said the U.S. still assesses that Russia is behind schedule and not making the progress in the Donbas that it expected.

A court in Spain on Thursday ordered the provisional release of Anatoly Shariy, a Ukrainian politician and blogger who was arrested after being accused of treason in his home country.

Shariy was arrested on Wednesday near the coastal city of Tarragona under an international arrest warrant issued by Ukraine, according to Spain’s National Court. Court documents said Shariy is accused of “high treason and incitement of hatred.”

Citing the “circumstances of the case” and Shariy’s connections to Spain, the judge declined to keep him in custody. Instead Shariy was ordered to surrender his passport, report regularly to authorities and remain in Spain, where he has reportedly lived since 2019.

The court said the measures would remain in place for 40 days in order to allow Ukraine to formally request Shariy’s extradition.

His arrest in Spain was announced by Ukraine’s security services on Thursday, who said there was reason to believe Shariy “was acting on behalf of foreign entities.”

Shariy, the founder of a political party considered by many in Ukraine to be pro-Russian, has been a vocal critic of Ukraine’s government. As recently as Tuesday he tweeted that he had been warned that Ukrainian intelligence was trying to track him down.

Ukrainian media reported that a member of Shariy’s political party said in February, prior to the start of Russia’s invasion of Ukraine, that Shariy had been granted asylum in the European Union. It was not immediately possible to confirm that report.