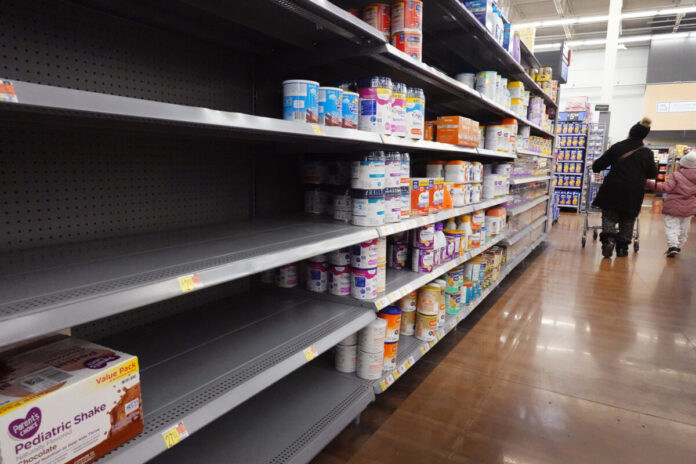 A nationwide shortage in baby formula is worsening, according to a new analysis, as parents have expressed alarm over the worrying trend.

At retail locations across the United States, about 40 percent of the top-selling infant formula products were not in stock for the week ending April 24, said Datasembly. The company said that it tracked baby formula stock at more than 11,000 stores nationwide.

“This is a shocking number that you don’t see for other categories,” Ben Reich, CEO of Datasembly, told CBS News. “We’ve been tracking it over time and it’s going up dramatically. We see this category is being affected by economic conditions more dramatically than others,” Reich added.

Previously, drugstore chains like Walgreens and CVS have announced they would limit how many baby formula products each shopper can purchase at a given time.

In a statement, Reich cited inflation, product recalls, and supply chain shortages as why there is “an unprecedented amount of volatility for baby formula.” And he believes that the shortages will continue in the near future.

“We expect to continue to see the baby formula category being dramatically affected by these conditions,” Reich said. “Baby formula stock, which has been one of the more affected categories so far in 2022, and one that will continue to demonstrate higher than average out-of-stock levels.”

Meanwhile, some parents have expressed alarm on social media about the apparent lack of infant formula on shelves.

“If the [mainstream media] can talk about the toilet paper shortage ever [sic] hour, they should be talking about the baby formula shortage at least,” Danielle Miller, a mother, wrote on Twitter last week. “We ended [up] finding the Amazon brand online but not everyone is so lucky to be able to feed that. Please share. This is every store!”

“The baby formula shortage is unreal!” GET THESE BABIES SOME FOOD!” another mother wrote on Twitter along with a photo of empty shelves, adding that “it’s a crisis all over.”

In February, a major baby formula producer, Abbott Nutrition, recalled numerous lots of its products following reports of bacterial illnesses in infants. Last week, the U.S. Food and Drug Administration issued a notice to consumers telling them not to consume any products manufactured at Abbott’s facility in Sturgis, Michigan, over concerns of contamination.