With Roe Under Threat, Biden Is an Unlikely Abortion Rights Champion 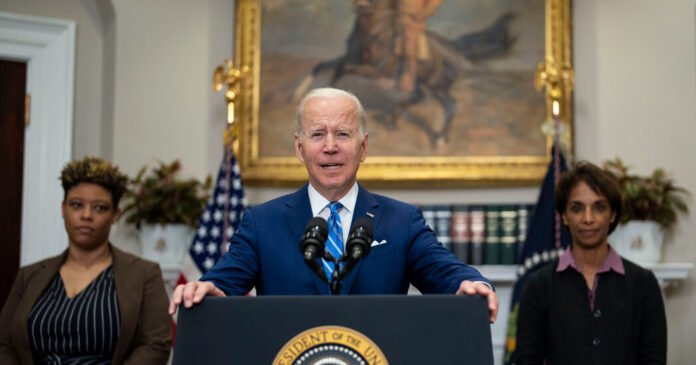 WASHINGTON — When abortion rights supporters protested outside the Supreme Court this week after the leak of a draft decision overturning Roe v. Wade, they turned their ire at one point toward the same president who just hours earlier denounced the possible ruling just as they were doing.

For President Biden, the threat to the landmark Roe decision represents a singular challenge as he attempts to put aside a long history of evident discomfort with the issue of abortion to transform himself into a champion of the constitutional right that may soon be erased from the law books.

Over the course of a half-century in national politics, Mr. Biden has rarely been the full-throated backer of abortion rights that activists have sought, evolving from an outright critic of Roe early in his career to a seemingly reluctant and largely quiet supporter. While he has used the word “abortion” in written statements as president, he had never spoken the word out loud since taking office until this week when the draft ruling leaked.

“If he won’t even talk about abortion (no votes or budget needed) or give us a plan he’s won’t go bold to protect us,” Ms. Bracey Sherman, the founder and executive director of We Testify, an organization representing women who have had abortions, wrote on Twitter on Wednesday.

“He could be out making speeches,” she added. “He could be using his executive order powers. He could deputize abortion providers to make them immune from prosecution. He could be doing anything. He could be trying. But he’s silent. And he won’t meet with us to discuss plans.”

To some extent, Mr. Biden’s reticence has reflected a broader unease among many Democratic leaders in recent years to highlight abortion rights nationally, focusing instead on specific states and districts where they are a stronger political selling point. While polls show a strong majority favor preserving Roe, they also show ambivalence about unlimited abortion rights.

White House officials insisted that Mr. Biden would use his office to do whatever he could to counter any ruling by the Supreme Court overturning Roe, but there are limits to his authority and aides outlined no specific ideas under consideration. Even in his comments in recent days, Mr. Biden has not dwelled on abortion but rather quickly shifted the discussion to a broader range of privacy rights that he argued would be imperiled by the opinion drafted by Justice Samuel A. Alito Jr.

“This is about a lot more than abortion,” Mr. Biden told reporters on Wednesday, citing gay rights and birth control. “What are the next things that are going to be attacked? Because this MAGA crowd is really the most extreme political organization that’s existed in American history — in recent American history.”

To the extent that he has discussed abortion this week, he used phrasing that was far from the preferred language of his own side. On Tuesday, he referred to “the judgment to choose to abort a child,” a wording that seemed to accept the anti-abortion argument that it is a child, not merely a fetus, that is aborted.

Instead, it fell to Vice President Kamala Harris to offer the administration’s most robust response to the court’s possible ruling.

“Those Republican leaders who are trying to weaponize the use of the law against women — well, we say, ‘How dare they!’” she thundered on Tuesday night at the annual conference of Emily’s List, a group that helps elect Democratic women supporting abortion rights. “How dare they tell a woman what she can do and cannot do with her own body. How dare they! How dare they try to stop her from determining her own future! How dare they try to deny women their rights and their freedoms!”

Longtime advisers said that Mr. Biden’s position on the issue was clear and that he preferred to use words like “privacy” rather than “abortion” because it appealed to a wider swath of the public. At her briefing on Wednesday, Jen Psaki, the White House press secretary, brushed off questions about why he referred to aborting “a child” and said quibbles about terminology do not undermine his fundamental stance.

That was not where he started, however. Mr. Biden, a practicing Roman Catholic, has struggled with the issue over the years. A former aide said Mr. Biden would personally never have considered abortion if it came up in his own family but always made women’s rights a priority, citing his success in enacting the Violence Against Women Act.

Mr. Biden was first sworn into the Senate in January 1973, just 17 days before the Supreme Court issued Roe. and at the time he accused the justices of going “too far.” In an interview a year later, he said a woman should not have “the sole right to say what should happen to her body.”

In 1982, Mr. Biden voted for a constitutional amendment pushed by President Ronald Reagan allowing individual states to overturn Roe. He called it “the single most difficult vote I’ve cast as a U.S. senator” but explained it in the context of his faith. “I’m probably a victim, or a product, however you want to phrase it, of my background,” he said. He reversed himself and voted against the amendment a year later.

For years, he voted for the so-called Hyde Amendment barring the use of federal Medicaid funds for abortion and proposed an amendment of his own to prohibit foreign aid for biomedical research related to abortion. He voted for legislation outlawing a rare late-term abortion procedure. But as he noted repeatedly in recent days, he also led the fight against confirming Robert H. Bork, an outspoken abortion foe nominated by Reagan to the Supreme Court.

By the time Mr. Biden was gearing up for his second run for the presidency, he presented himself as a changed man. “I was 29 years old when I came to the U.S. Senate, and I have learned a lot,” he said on “Meet the Press” on NBC in 2007. “Look, I’m a practicing Catholic, and it is the biggest dilemma for me in terms of comporting my religious and cultural views with my political responsibility.”

His shift in position to meet his political needs was most recently on display in 2019 as he battled more progressive opponents to win the Democratic presidential nomination. One day his campaign said he still supported the Hyde Amendment, but after an uproar on the left, he reversed his longstanding stance the next day.

As a result, both sides share uncertainty about his true convictions. “If you follow his history on this, Joe Biden has been on this issue wherever he thought it was politically expedient,” said David N. O’Steen, the executive director of the National Right to Life Committee. “Internally how does he really feel? Nobody really knows how he feels.”

Since taking office, Mr. Biden’s White House released a National Strategy on Gender Equity and Equality pledging to “protect the constitutional right to safe and legal abortion established in Roe v. Wade.” The administration rolled back Trump administration restrictions on the program known as Title X, which provides access to family planning services and supports clinics that counsel women on abortion.

A Biden adviser, speaking on the condition of anonymity to discuss internal deliberations, said the president had now directed his team to be as creative as possible using executive action to protect abortion rights.

Appearing on Capitol Hill on Wednesday, his health secretary, Xavier Becerra, vowed to “double down on the effort to make sure that the legal right of Americans, women, to access the care they’re entitled to continues.”

But short of muscling legislation through Congress, or using his bully pulpit, options are limited. Some experts suggested the government could direct resources to groups that provide housing, transportation and other support to women who cross state lines seeking an abortion. But that could violate the Hyde Amendment.

If the court does overturn Roe, the next battleground will be over abortion pills. Since it became legal in 2000, medication abortion has become increasingly common and now accounts for more than half of recent abortions. If Roe falls by the wayside, states controlled by Republicans will most likely ban medication abortion as well.

Legal experts said the Biden administration could challenge those bans by arguing that because the pills are approved by the Food and Drug Administration, it is legal for doctors in any state to prescribe them. Asked about this, the Biden adviser said Mr. Biden would not dictate anything to the Justice Department.

Some Democrats expressed frustration that their party’s leaders have not been more forceful in making abortion rights a signature issue. “Where is the Democratic Party?” Gov. Gavin Newsom of California said on Wednesday. “Where’s the counteroffensive?”

Senator Amy Klobuchar, a Democrat from Minnesota and an ally of the White House, pointed to statements by Mr. Biden and Ms. Harris and expressed confidence they would rise to the political challenge. “I think that they will be leading on it,” she said in an interview. “Of course their voices will be really important.”