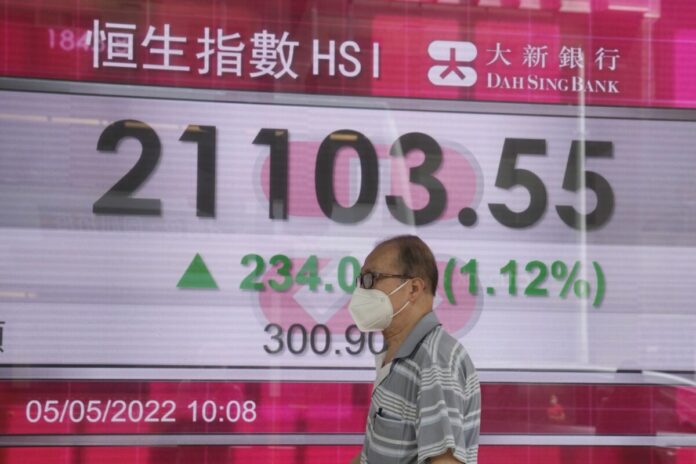 NEW YORK—Stocks are slumping on Wall Street, erasing a rally from a day earlier, as markets assess the looming fallout from the Federal Reserve’s stepped-up fight against inflation.

On Wednesday, the Fed raised its benchmark interest rate by half a percentage point as part of an effort to slow consumer borrowing and tamp down inflation, which is at a four-decade high. The market rallied when Fed Chair Jerome Powell dismissed the possibility the Fed could resort to a more aggressive three-quarters point hike in the future.

Now, traders are starting to fret more about the impact of the Fed’s moves to dampen demand and slow the economy.

“The Fed is between a rock and a hard place, and because of instant information investors are experiencing both fear and greed at the exact same moment,” said Sam Stovall, chief investment strategist at CFRA.

Bond yields resumed their upward march, which will send mortgage rates higher. The yield on the 10-year Treasury rose sharply, to 3.09 percent, from 2.92 percent a day earlier.

The Fed’s aggressive shift to raise interest rates has investors worrying about whether it can pull off the delicate dance to slow the economy enough to halt high inflation but not so much as to cause a downturn. The pace and size of interest rate increases is being scrutinized closely on Wall Street.

“Investors realized that by the Fed continuing to take a very measured approach, it could actually allow inflation to remain out of control,” Stovall said.

The latest move by the Fed to raise interest rates by a half-percentage point had been widely expected. Markets steadied this week ahead of the policy update, but Wall Street was concerned the Fed might elect to raise rates by three-quarters of a percentage point in the months ahead. Powell eased those concerns, saying the central bank is “not actively considering” such an increase.

The central bank also announced that it will start reducing its huge $9 trillion balance sheet, which consists mainly of Treasury and mortgage bonds, starting June 1. Those large holdings are a policy tool the Fed uses to keep long-term interest rates, like those on mortgages, low.

The Bank of England on Thursday raised its benchmark interest rate to the highest level in 13 years, its fourth rate hike since December as UK inflation runs at 30-year highs.

Energy markets remain volatile as the conflict in Ukraine continues and demand remains high amid tight supplies of oil. European governments are trying to replace energy supplies from Russia and are considering an embargo. OPEC and allied oil-producing countries decided Thursday to gradually increase the flows of crude they send to the world.

Higher oil and gas prices have been contributing to the uncertainties weighing on investors as they try to assess how inflation will ultimately impact businesses, consumer activity, and overall economic growth.

The latest corporate earnings reports are also being closely watched by investors trying to get a better picture of inflation’s impact on the economy. Cereal maker Kellogg rose 3.8 percent after reporting encouraging financial results. Etsy stumbled 17.2 percent after giving a weak forecast.

Twitter rose 3.6 percent after Tesla CEO Elon Musk said he had secured more backing for his bid to take over the company.

Technology companies had some of the biggest losses and weighed down the broader market, in a reversal from the solid gains they made a day earlier. Internet retail giant Amazon slumped 7 percent and Google’s parent company fell 5.1 percent.