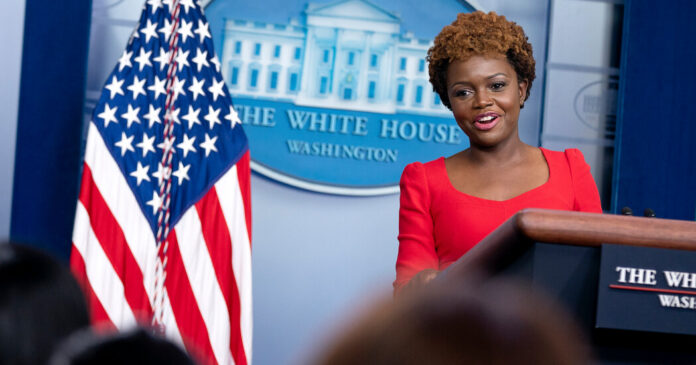 WASHINGTON — President Biden on Thursday selected Karine Jean-Pierre, the principal deputy press secretary, to replace Jen Psaki as the top White House spokeswoman, making her the first Black woman to hold one of the most high-profile jobs in American politics.

Ms. Jean-Pierre, who worked on Mr. Biden’s campaign and has had a long career in Democratic communications, will become the president’s second White House press secretary and will deliver daily briefings from the lectern in the briefing room.

In a statement, Mr. Biden said she “not only brings the experience, talent and integrity needed for this difficult job, but she will continue to lead the way in communicating about the work of the Biden-Harris administration on behalf of the American people.”

He predicted that she would be “a strong voice speaking for me and this administration.”

Ms. Jean-Pierre, who is in her 40s, will take over from Ms. Psaki, who is leaving the administration and is expected to take an on-air role with MSNBC.

“She is passionate,” Ms. Psaki tweeted of her colleague on Thursday. “She is smart and she has a moral core that makes her not just a great colleague, but an amazing Mom and human. Plus, she has a great sense of humor.”

The selection of Ms. Jean-Pierre adds to the diversity among Mr. Biden’s more senior officials. The president has emphasized his desire for that to be a priority since the early days of his administration, when he stressed the diverse characteristics of members of his cabinet.

As Ms. Psaki noted on Twitter, Ms. Jean-Pierre will be the first Black woman and the first openly gay person to serve as the top spokesperson for the White House.

Ms. Psaki’s last day as press secretary will be May 13, the president said in his statement.