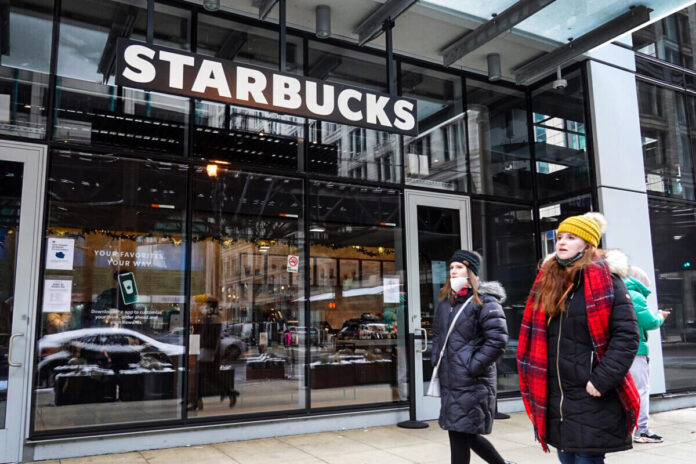 Starbucks is raising pay for employees across its stores in the United States but the wage increase won’t apply to unionized stores, the company said.

CEO Howard Schultz announced the move during an earnings call on Tuesday and noted that the company will also be investing in modernized training and collaboration as well as store innovation, among other things, in an effort to boost customer experience.

“What you will see is the transformation of the Starbucks customer and partner experiences,” Schultz said. “The transformation will accelerate already record demand in our stores. But the investments will enable us to handle the increased demand—and deliver increased profitability—while also delivering an elevated experience to our customers and reducing strain on our partners. And we will reintroduce joy and connection back into the partner experience.”

The pay increase will apply to more than 240,000 Starbucks partners and roughly 8,800 Starbucks stores across the country, according to the company.

However, it will not apply to the recently unionized stores or to stores that are in the process of unionizing, as Starbucks does not have the right to do so under federal law, Schultz said.

The new investments will bring the total investments in employees and improving customer experience to nearly $1 billion in this fiscal year alone, Starbucks said.

Starbucks previously announced that it would raise the company’s minimum hourly wage to between $15 and $23 this summer, beginning in August, and will also be adding incremental increases that will apply to all U.S. store partners, while also “recognizing and rewarding” tenured partners.

Employees who have been with the company for two to five years will receive a minimum 5 percent increase in wages or an increase to 5 percent above the starting wage rate in their market, whichever is greater.

Those with more than five years of service will receive at least a 7 percent increase or move to 10 percent above the market start rate, whichever is higher.

All partners hired on or before May 2 will get either a 3 percent raise or $15/hour, whichever is higher.

Starbucks said that pay changes in unionized stores would need to be bargained but that partners in those unionized stores or those in the process of unionizing will receive the wage increases that were announced on Oct. 21.

“Where Starbucks is required to engage in collective bargaining, we will negotiate in good faith. Starbucks will not favor or discriminate against any partner based on union issues,” Schultz said.

However, the union, Starbucks Workers United, said in a statement on social media that it has filed charges against “Schultz’s threats that union stores won’t receive these benefits” adding “That’s not how labor law works and Starbucks knows it.”

The Epoch Times has contacted a Starbucks spokesperson for comment.

More than 50 Starbucks stores across the United States have voted to unionize in recent months since the first corporate store voted to do so in Buffalo, New York, in December 2021.

Overall, 237 company-owned stores have filed petitions with the National Labor Relations Board to date.