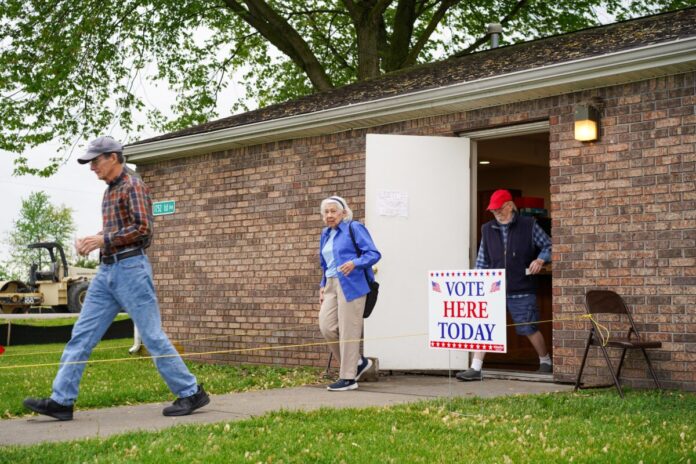 Houchin got 21,671 votes, followed by Mike Sodrel with 14, 993 votes and Stu Barnes-Israel with 12,181 votes, according to the 9th District’s latest tally with 99 percent of votes counted by the Indianapolis Star.

Among the three top contenders in the GOP race, Houchin was the only one to openly align with former President Donald Trump. Cardboard cutouts featuring Trump could be seen at her campaign events. Her TV campaign ad read, “I am pro-life, pro-Trump, and pro-second amendment.”

Of the 18 counties in the 9th Congressional District, all but one—Monroe County, home to two universities—went for Trump in 2020, sometimes with overwhelming margins.

Houchin was also the only candidate among the three who has held an elected state-level office in the past decade. She had been a state senator since 2014 before she resigned to run for the congressional seat.

As for the other two top candidates, Sodrel, a truck company owner, briefly represented the 9th district for one term between 2005 and 2007; Barnes-Israel, a Citadel consultant and former Army captain, ran as a political outsider.

Matthew Fyfe won the Democratic primary in the same district, with 12,232 votes, according to the latest tally. But Houchin is expected to carry the general election in the Republican-leaning district, which has been in the party’s hands since 2010.

Trey Hollingsworth, the district’s three-term Republican incumbent, decided not to run for a fourth term in January. Nine Republican candidates then jumped into the race, making it one of the most crowded primaries in Indiana.

The other contested Republican primary was the 1st Congressional District, just south of Chicago. Nine Republican candidates contended in the race, with Jennifer-Ruth Green emerging as the primary winner on May 3.

Green, too, stood behind Trump’s America First agenda in campaign TV ads. She also criticized the other top contender, Blair Milo, for avoiding voting for Trump in 2016 by declining to serve as a delegate to the Republican National Convention in Cleveland.

The 1st Congressional District has been in the Democrats’ hands since the 1930s. But voting data shows the district slowly trending red in the past few election cycles.

The district is viewed as Indiana’s only competitive congressional race for the November election by the Cook Political Report.