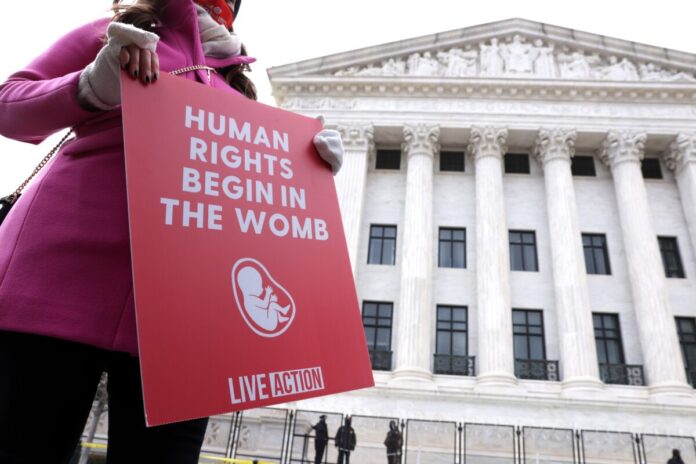 Pro-life organizations are curbing their enthusiasm at the leaked “initial draft majority opinion” reportedly written by Supreme Court Justice Samuel Alito, which indicates the court would overturn the 1973 Roe v. Wade decision. It would put abortion laws back fully in the hands of states and give voters more local control over the issue.

That is how it used to be, but if Roe is overturned, society will not return to 1973 values and resources, with pro-life advocates saying pregnant women have more options today. In the 49 years since the decision, attitudes about unplanned pregnancies have changed and resources for mothers have increased.

Advocates are not celebrating yet. It is unclear if the leaked opinion is authentic, and decisions are not final until the justices officially rule.

“This is encouraging but it is not the final opinion. That final opinion will be coming down sometime between today and the last day of the Supreme Court session,” Joe Pojman executive director of the Texas Alliance for Life told The Epoch Times. He predicts the session will end in June or early July. “This gives us reason to hope, but it is not definitive and we’re not counting this as the chickens hatched by any means.”

“We are cautiously optimistic that Roe v. Wade will be overturned. It was a horribly tragic decision that resulted in the deaths of more than 62 million precious preborn babies and has caused suffering for countless women who are left to grieve the loss of children to abortion,” Gallagher told The Epoch Times. “This would mean the issue of abortion would return to the individual states so the people, through their duly elected representatives, can pass laws protecting preborn children and their mothers from harm.”

Laura Bogley, director of legislation for Maryland Right to Life said the ruling would return to the state legislatures their constitutional authority to regulate abortion.

“The American people were sold a lie that the federalization of abortion was necessary to make it safe, legal, and rare, but it has become clear that the multibillion-dollar abortion industry cares only that abortion is legal and lucrative,” Bogley told The Epoch Times. “It is the job of the states to ensure that abortion is safe, and with this pending ruling it seems the states may finally have the opportunity to do their job.”

Gallagher said our culture has changed its views on pregnancy through the years.

“Times have changed and as a nation, we are more accepting of pregnant women in trying circumstances, as we should be. There is a culture of caring that reaches out to pregnant women and extends a welcome to them and their babies,” Gallagher said. “In the decades since Roe v. Wade, a tremendous network of aid and support has grown for pregnant women facing challenging circumstances.”

There is a safety net for everyone, she said.

Pojman said that while the scientific community knew in 1973 that life begins at conception, it was not widely known among the public. But today with ultrasound, it is common knowledge.

“Everyone understands now that the unborn child is a baby. It is hard to find anyone who is pregnant who doesn’t happily show you the ultrasound picture of the little boy or the little girl,” Pojman said. “At the same time, society has become much more understanding of women with unplanned pregnancies, including women out of wedlock, and that makes it much more accessible for a woman to continue her pregnancy, even if she’s not married.”

Lauren Enriquez, spokesperson at Students For Life, found on college and high school campuses, said millennials and Generation Z together make up one-third of the electorate, and they want to have a voice in the conversation about abortion.

“We care about how abortion is legislated and how the judicial system rules on abortion. People who were around during Roe v. Wade tend to say ‘abortion is a settled, issue we need to stop talking about it, we need to accept that it’s the law of the land.’ And yet it is anything but settled,” Enriquez told The Epoch Times. “We come from a generation where 62 million of us were lost to abortion, so it really matters to us. The culture has changed, and the resources that are available have changed.”

Enriquez lives in Texas, where Roe began and, yet the city of Lubbock has declared itself a sanctuary city for life and outlawed abortion, she said. “There’s been no upheaval. People are not freaking out. Life goes on without abortion, and it goes on better.”

An overturn of Roe would add a layer of urgency to state governor’s races. Governors and state legislators would again drive local abortion policy.

“The governor’s race is obviously critically important to the future of preborn children and their mothers in Pennsylvania,” Gallagher said. “We need to elect a strong pro-life governor who is going to sign pro-life legislation into law. The stakes are incredibly high.”

“Even if a state does pass a law that says unborn children are going to be protected, it is not going to send people back to the pre-Roe era, where the numbers were highly inflated as to how many women actually died from illegal abortions. We’ve got a completely different world today,” Carol Tobias, president of National Right to Life told The Epoch Times. She indicated that medical care has advanced since then. “We’re going to have some states that protect unborn children almost immediately and others are going to go the other direction and will protect absolutely no child before birth, and they want taxpayers to pay for it. And then we’re going to have some states kind of in the middle. We are going to work to protect as many babies as we can as soon as we can, but it’s going to be a long battle in some places.”

Texas also passed an Alternative to Abortion Program in 2021, dedicating $100 million to serve 150,000 women for three years after the birth of the child. Texas has more than 300 pro-life pregnancy centers, maternity homes, and adoption centers that provide resources for women with unplanned pregnancies. The legislature also passed the Texas human Life Protection Act. It is a trigger law that goes into effect if the Supreme Court overturns Roe vs. Wade. Under the act, Texas would fully ban most abortions. Other states with similar trigger laws already in place are Idaho, Wyoming, Utah, North Dakota, South Dakota, Missouri, Oklahoma, Arkansas, Louisiana, Kentucky, Tennessee, and Mississippi.

New York legislators passed the Reproductive Health Act in 2019, allowing abortion up to 24 weeks [6 months] and longer if the mother’s health is at risk.

California Governor Gavin Newsom said in December that he aims to make the state a sanctuary for those seeking an abortion. In California, abortions are available up to 24 weeks of pregnancy and the state insurance for low-income individuals will cover the cost of an abortion.

Oregon allows third-trimester abortions, after 27 weeks, with no restrictions, and requires health insurance to cover the procedure.

“I am expecting the abortion industry, abortion advocates and their allies in the media to be talking about how, now that the court has overturned Roe v. Wade, abortion is illegal, and I just want the reporting to be honest: that 50 states will get to decide what their laws are going to be. Overturning Roe does not make abortion illegal,” Tobias said.

“I think that most people knew it was going to take years,” Carroll told The Epoch Times. The fact that Americans show up so faithfully every year outside the Supreme Court for the March for Life. The dedicated growth of the pregnancy center movement—the hands and feet of the pro-life movement. Our movement hasn’t given up over the last 50 years and hopefully, finally, we will see a change and we can move on to the next phase, because this is certainly not the end of the movement, but just marks a step forward.”

The Epoch Time reporter Zachary Stieber contributed to this report